Today is a short day and is the official last day of the circuit for my companion and I. The walk between the Refugios is not long, about 3.5 hours. We were up early and aiming to arrive at Refugio Paine Grande in time for the catamaran that would drop us at our bus.

It had rained most of the night, nothing heavy just constant. I awoke in the dark and quickly dressed and began packing my gear. Usually the first thing I do is start brewing coffee, but as I’d lost my water bottle yesterday when the wind whipped it out of its pocket and cast it down onto the glacier, I figured it would be quicker to pack and have breakfast afterwards. Before long I had everything, including my wet tent, packed away and I was in the warmth of the cooking room heating water for coffee and soup.

We headed out by 8.30 and straight away began climbing a hill in the chill wind. It began to rain as we walked along the side of the mountain with Lago Grey below us. The trail dipped up and down through the valleys.

There looked to have been a sprinkle of snow on the peaks above us as we passed a raging waterfall well stocked with water from the rain. 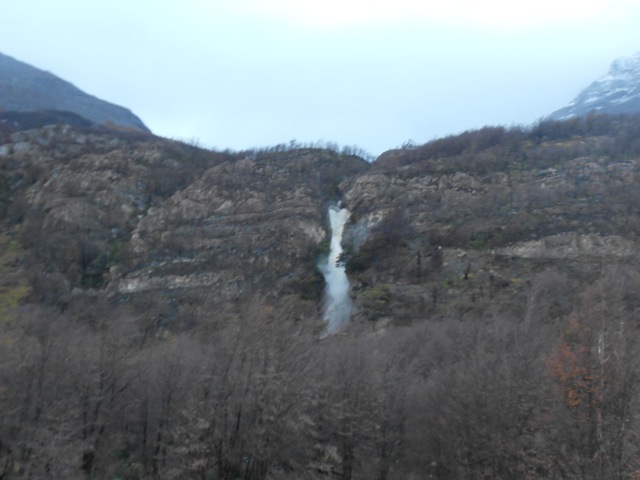 The trail continued and as we crossed a couple of ridges, the wind was so icy coming off the glacier and the rain so constant I was forced to put on my waterproof jacket. If it rains when I’m hiking, I tend not to worry about my jacket. While it protects me from the rain, I still sweat, so get wet inside anyway. It does make a good wind breaker though, so in this case it helped a lot. We passed a couple of miradors but the wind was too fierce to consider standing out in the open looking back at the glacier.

We then climbed a hill around the side of a laguna…

…before crossing a final ridgeline to follow a kilometre long gully down towards the blue of Lago Pehoe, where Refugio Paine Grande is situated. 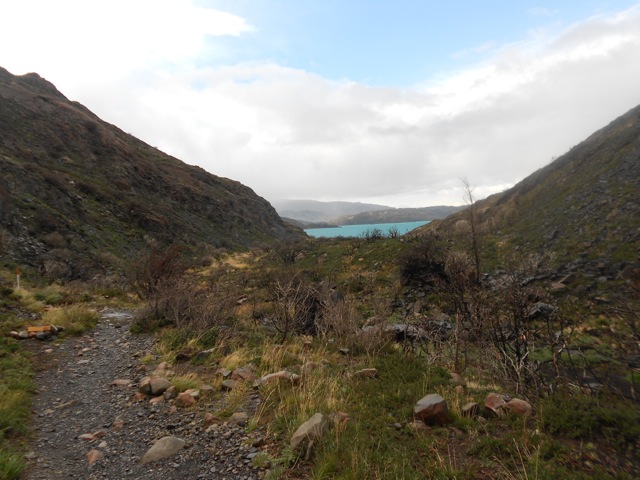 Eventually we arrived at the bottom and walked the short distance to the refugio. 30 minutes later and we were on the catamaran and heading away from the park. 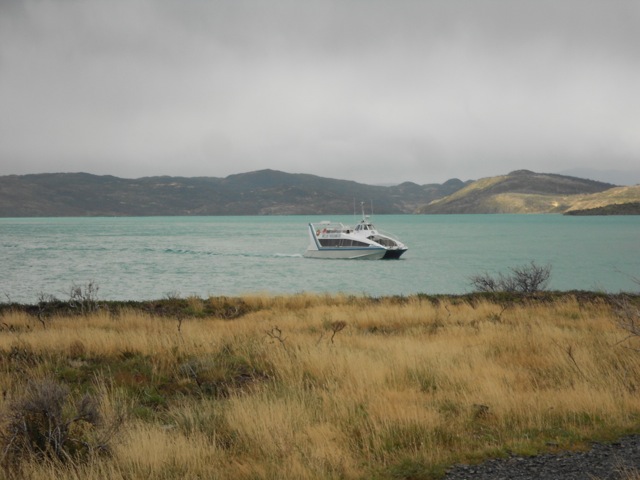 With the weather in Patagonia known for being very changeable, we were blessed with having 7 wonderful days out of the nine we were on the hike. The Parque Nacional Torres del Paine is a wondrous place with many great attractions. While the popularity is one of its downsides, I’m glad I went in low season as peak season would be just insane, with far too many people. Still, the mystical mountain peaks, both with and without snow and, the Lagos and Rios surrounding it, the Lagunas within it and the wonderful sights on all sides of the park were amazing. I’m glad I decided to do the circuit as the far side of the park is quieter and entirely different to the front side, with the glaciers, the pass and the south patagonian ice field in the distance.

I also enjoyed my companions for the hike, Chris, the young American guy I walked with most of the hike; Pip and Dan from Sydney and Sam from London, who walked as a threesome, but were with us at camps except the last (as they got stuck behind the landslide). Thanks to these people for making the experience what it was. Also, thanks to the many people we met at various parts of the hike, especially the two american couples on the back side – but who didn’t start with us – the Aussie couple who were from my hostel, and the group of young american girls studying in Santiago (kept Chris busy!).

Next I’m off to El Calafate in Argentina for a couple of rest days near the lake, before off to El Chalten for a three day hike around Mt Fitz Roy.