Compared to the massive sprawling beasts that are most capital cities in South East Asia, Vientiane – pronounced ‘Vieng chan’ — is decidedly small town. But even with only two hundred and ten thousand people, Vientiane is still the largest city in the Laos. 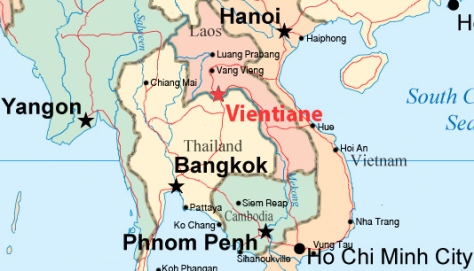 Because ‘chan’ has two meanings in the modern Lao language, Vientiane is known as both the ‘City of the Moon’ and ‘City of Sandalwood’. The city is nestled on the northern bank of the Mekong River, with Thailand on the other side. 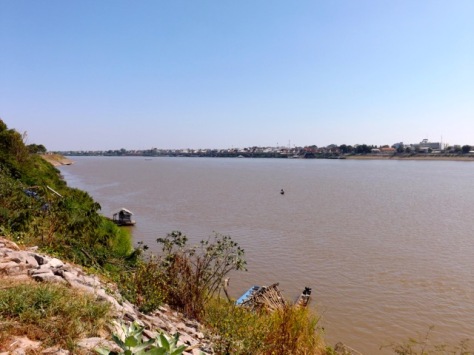 Sleeper Train
The 12-hour journey from Bangkok to Laos was by overnight train, my first experience on a sleeper train. I booked in the second class car and ended up with an upper berth. Being 189 cm tall (6’3”), I was concerned that I might not fit. But when the bed was made up and I climbed into it, it was just enough. 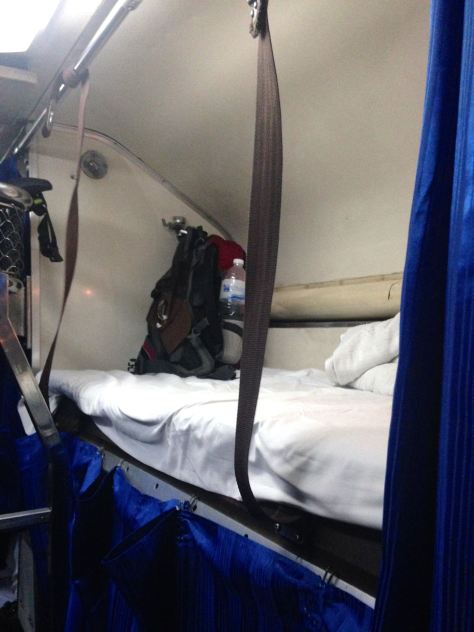 I’ve slept in tighter locations and actually got a good sleep. The train has two toilets per car, a western toilet and a squat toilet, but instead of going into a septic tank, waste simply drops out a hole in the bottom of the car onto the tracks. I guess it’s biodegradable. By about 10pm the car was silent with most curtains closed. 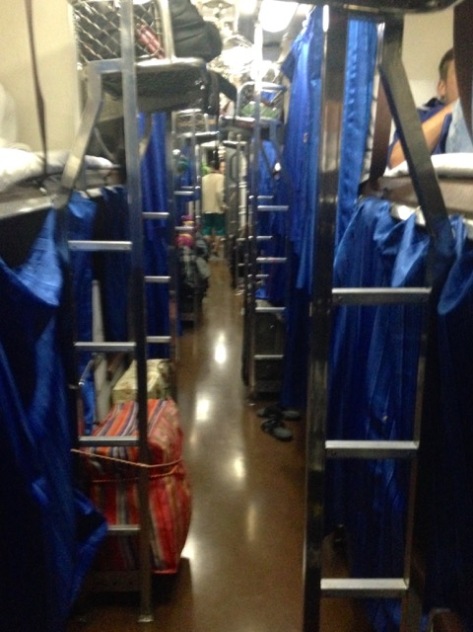 Buddha Park
About 25 km east of Vientiane is a sculpture park called Xiang Khuan, meaning Spirit City. The site was begun in 1958 by a monk who integrated both Hinduism and Buddhism into the sculptures. There are over a hundred statues in the park, some quite massive. The largest is the reclining buddha… 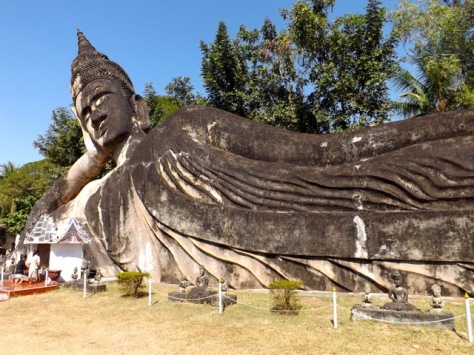 Another piece has a crawlway inside and has several chambers on three levels and access to the roof. 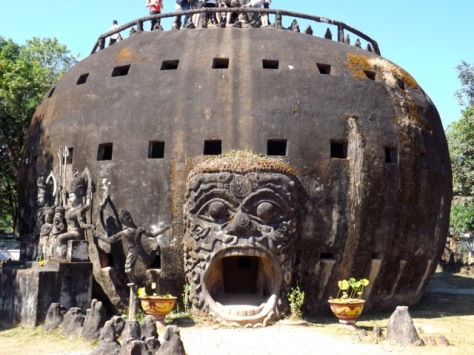 There are several ways to get to the park, by tour bus, tuk-tuk, or as I did, by scooter!

Petuxai – The Victory Gate
Also known as the Gate of Triumph, the monument is dedicated to those who fought for independence from France in 1949. 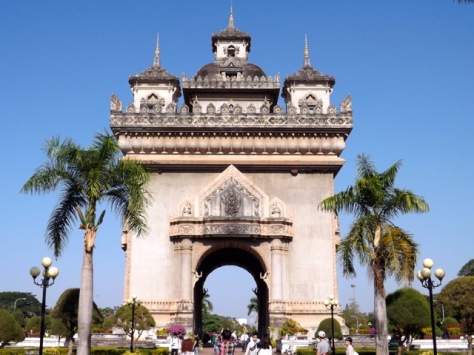 The monument resembles the Arc de Triomphe in Paris, but is Laotian in design and decorated with mythological creatures. The structure has 7 levels, the top three giving great views across Vientiane.

Pha That Luang
The golden buddhist stupa is regarded as the most important national monument in Laos and is a national symbol. It is suggested to have been built in the 3rd century and is surrounded on three sides by other temples. 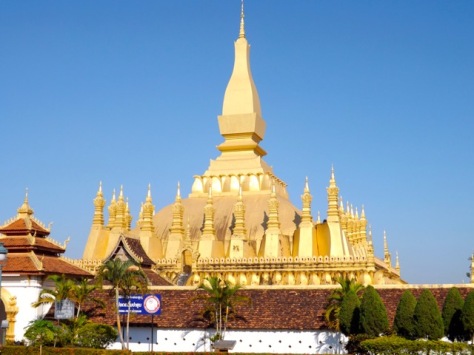 That Dam
A black stupa said to be inhabited by a seven-headed naga, a water deity taking on the form of a large snake with the upper body of a female. This creature was to have protected Laos from the Siamese army in 1827. 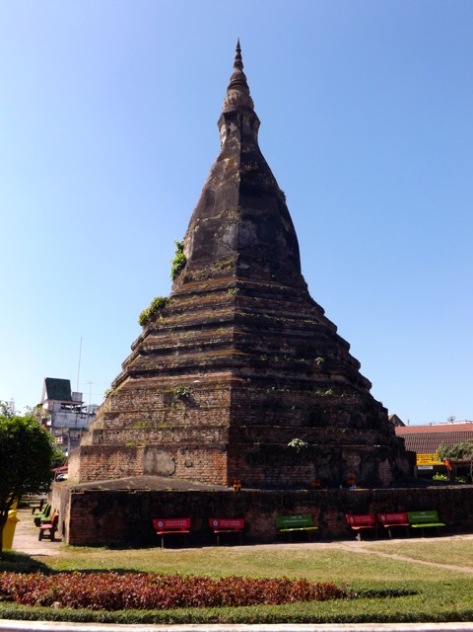 Nagas are the divine enemy of Garuda, the great eagle ridden by Shiva in the Hindu religion.

Temples
Like all cities in Asia, Vientiane is littered with temples. Most temples have a very Thai design — or maybe the Thai temples have a Laotian design — but in Lao the temple compound is usually surrounded by a series of shrines. Laotian temples often have a tower in their compounds that can be climbed. 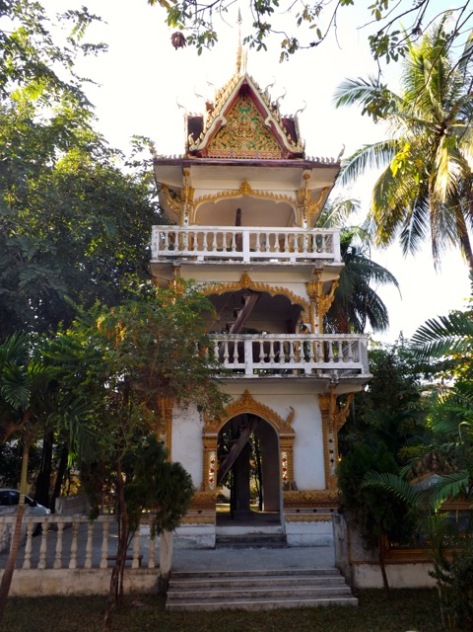 Here are some of the temples I visited in my travels in Vientiane: 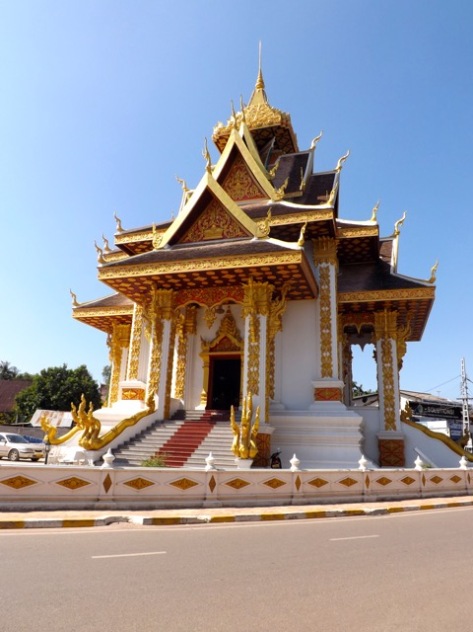 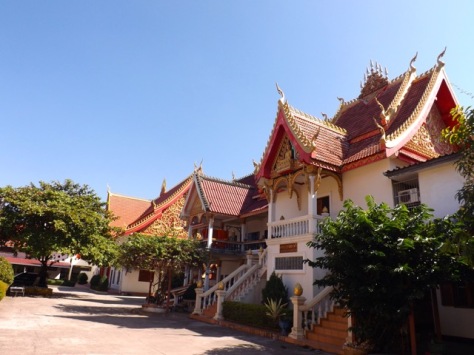 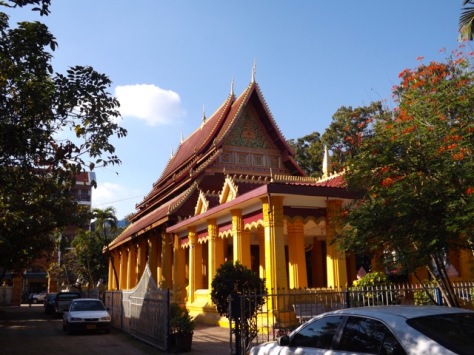 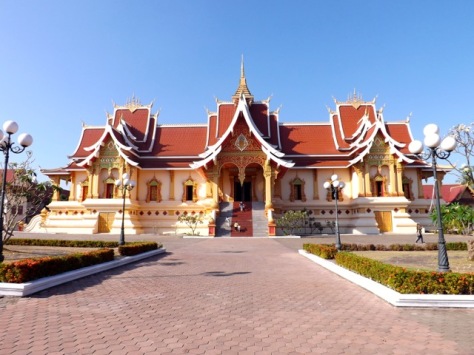 COPE Visitor Centre
Laos is the most bombed country in the world. With a major portion of the Ho Chi Minh trail running through Laos it was bombed heavily during the Vietnam War in attempts to sever the Vietcong supply lines. But also during bombing runs, if the US had not expended all of its ordinance it would be discarded over Laos.

COPE is an organisation that provides rehabilitation to Laotians who have suffered disabilities from unexploded munitions left over from the war. The Visitor Centre is a museum which also presents a documentary film following one such victim. 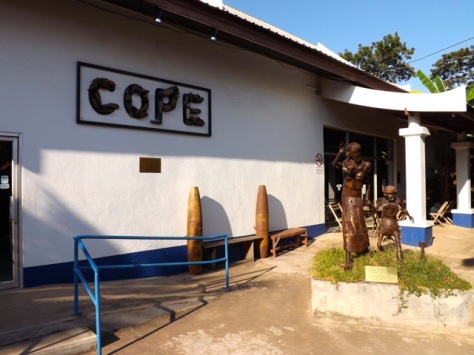 Overall, Vientiane surprised me. Considering Laos is a poor country, the capital was more advanced than I expected. There were more Apple stores than any other city I have ever been to (including the US), a large western style cafe district and a decided lack of US chain restaurants — not a KFC, McDonalds or Starbucks in sight.

Next, I head north to the backpacker town of Vang Vieng.