The Peak District National Park is a region of England’s Midlands just to the East of Greater Manchester. The district is named after a series of tall rolling hills strewn with walking/cycling trails and dotted with villages. 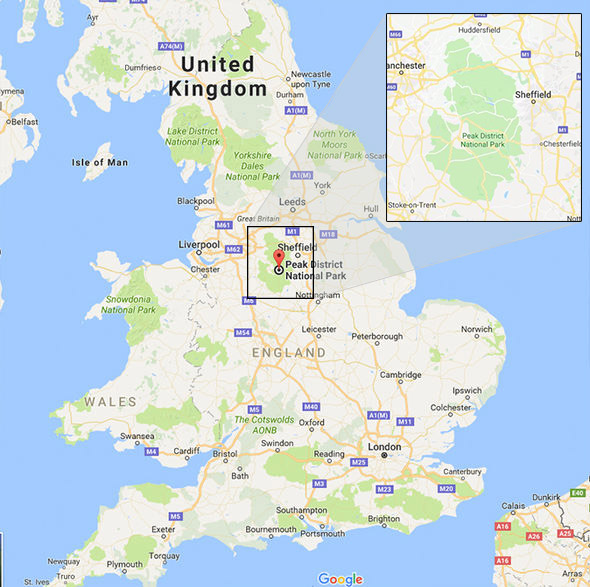 It’s pre-summer in the United Kingdom, so I have come out of my winter hibernation for hiking season. My first, this year, will be my longest UK hike, although not the longest of the season. The Inn Way of the Peak District is one of several ‘Ultimate Pub Walks’ created in northern England. It is a six-day hike, covering 85 miles (135 km) and passes 51 pubs. While it’s not a pub crawl as such, it does allow for many places to stay, dine, and of course, grab a couple of well-deserved ciders after a long day’s walk. 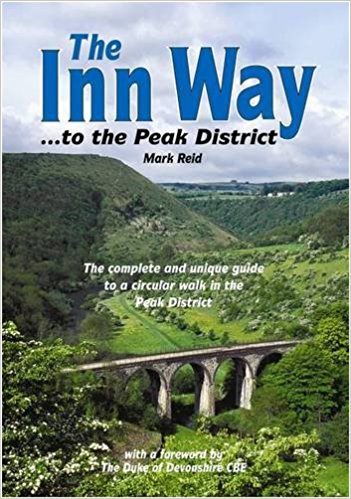 Find out more about this hike and to buy the book go to http://www.innway.co.uk

The Peak District is a diverse area with much to see, from the wild moors in the north to the limestone valleys to the south. There are Roman roads, plentiful villages, areas known for its history of Robin Hood, with Nottingham to the South East, and a lot more I hope to discover on my walk.

Day 0 – London to the Peak District

My train to Manchester was in the early afternoon, so it gave me plenty of time to pack and repack in preparation. On the Virgin Trains, Manchester is only 2 hours north of London, then it was an hour-long bus ride to Hayfield, the Trailhead of the Inn Walk.

Hayfield is a quaint larger village to the west of the Peak District. After arriving at my accommodation, I went for a walk around town and followed a short trail to a local reservoir.

Then it was off for last-minute preparations.

Today will be the hardest day of the hike, both in distance and difficulty and with the sun is out, the heat will make it more difficult. It’s going to be a long day.

I set out from the Kinder Lodge, across Hayfield, then stopped to have a sandwich made for me and to repack my pack. I climbed the steep village roads to the trailhead only to discover I had left my hat on the seat where I had been repacking. Just what I needed, more length to the hike.

With my hat firmly on my head, I climbed along a rocky dirt path with three off-road cyclists, into open paddocks high above Hayfield and the other villages in the valley. 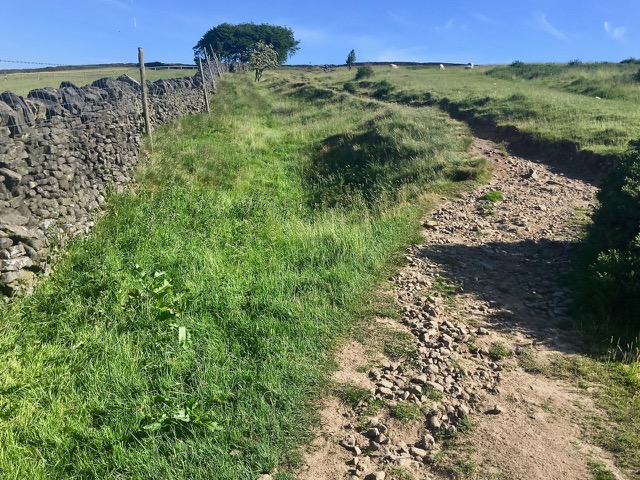 I followed a trail, called the Snake Path, as it slowly ascended across the grazing fields on a slightly rocky dirt path. After about a mile I crossed into the moors, the difference in vegetation obvious.

The trail continued climbing for some time before flattening out near the Kinder Reservoir. But the view was only a distraction for the climb that was to come.

The trail follows the curve of the reservoir and up into the William Clough, a long gully. 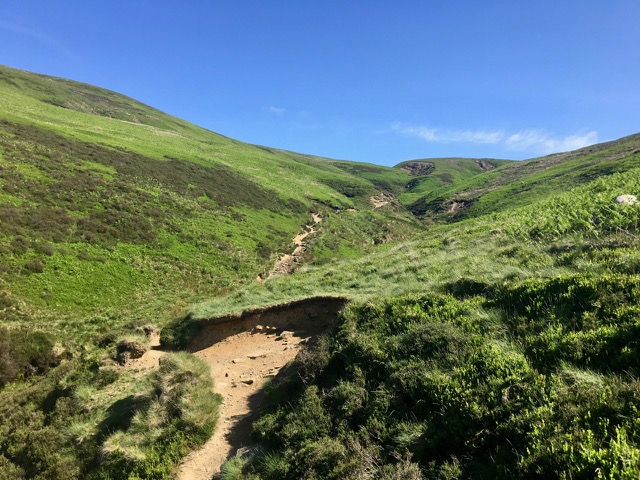 The rocky trail crossed the stream flowing down the Clough several times.  I climbed slowly until it levelled out at Ashop Head between Mill Hill and the Kinder Scout Tor. 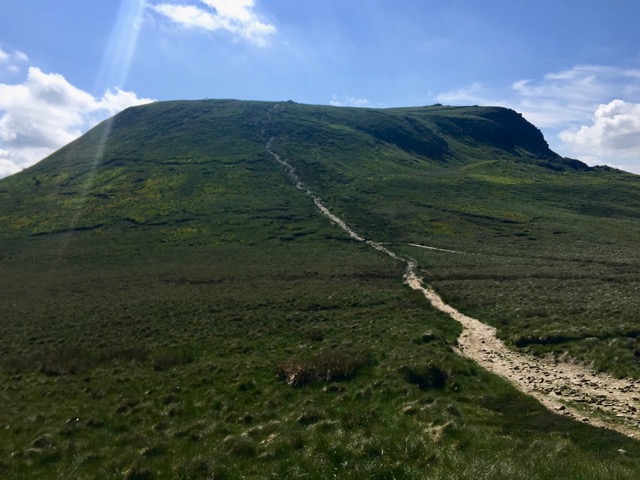 I continued past Ashop Head and followed the trail around hard to the right where it followed Ashop Clough for three miles. I rested in the sun, part way along, before continuing towards the end of the Clough where there is a fair-sized wood.

In the woods, alongside the river, the trail climbed sharply up to a major road, one I had been hearing for some time. I walked along it for a short distance to the Snake Inn where I stopped for lunch. I headed back to where the trail was supposed to take but found the access was no longer available. I returned to where I had come out of the woods, crossed the road and headed up a steep path. 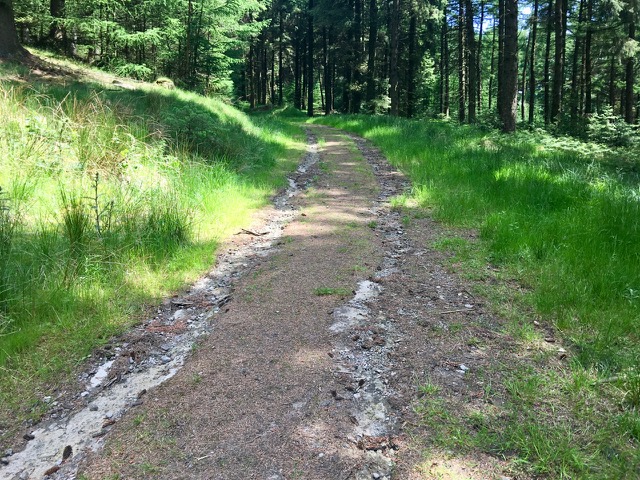 I followed it to an old Roman road on the edge of the Cowms Moor, with a rocky shelf to my left, and then onto grazing fields with a rock fence. 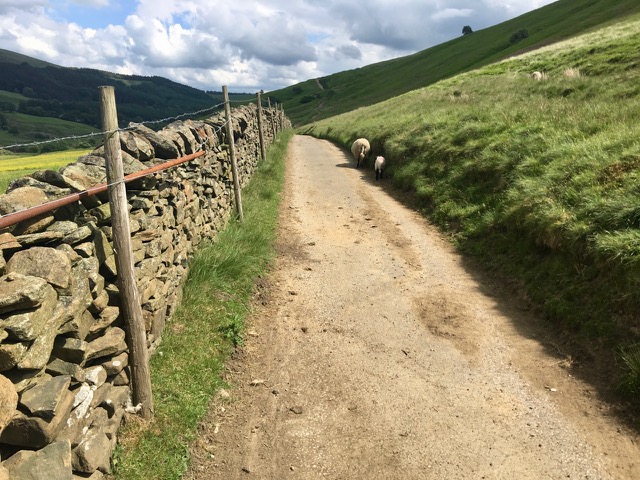 After a mile, I came back down to the major road where I crossed and headed up into the moors once more. The trail climbed steadily, following the old Roman road for a couple of miles with woods to the side. It then ran flat across several grazing fields as I approached Hope Cross.

Ahead I could see a tor and figured that I would be climbing it, but the trail seemed to veer around it. Five hundred metres along and I discovered my map showed another path up the tor that wasn’t there, only a steep ridge. I chose not to walk back, so out came my hiking poles for the first time and I set off up the hill. After five minutes of climbing, I discovered the end of one of my brand new poles had come off. I pushed on upwards anyway to the trail and then up the Tor. 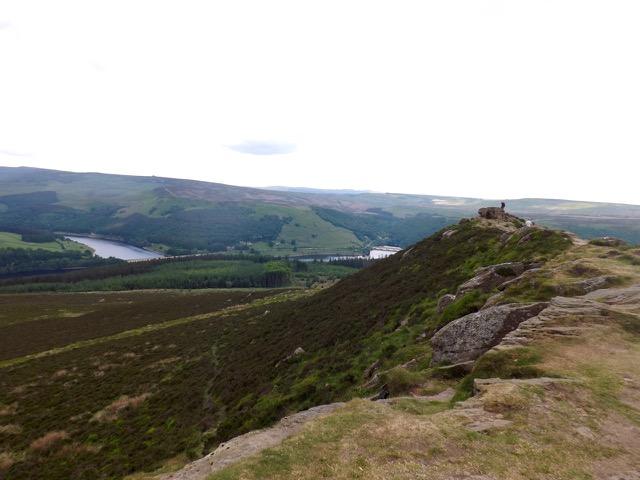 As I came over Thornhill Brink, I got my first sight of the Ladybower Reservoir below. But the climbing was not done, ahead was the Winhill Pike, which gave me a better view of the reservoir. 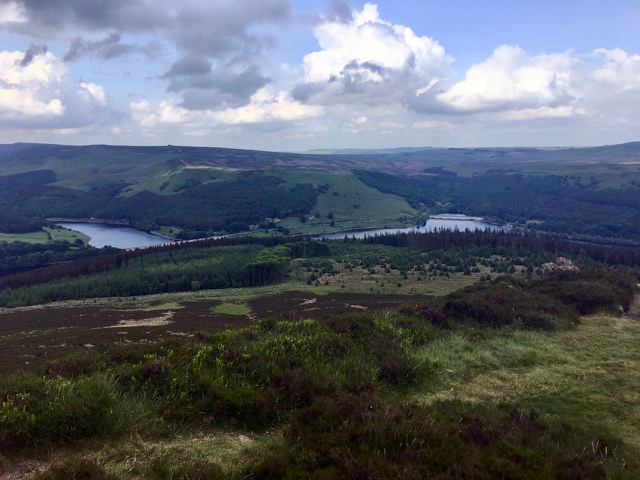 Then, after a long day in the sun, the worst thing is a long steep descent. Steep descents can be painful on the knees, and 300 metres steeply down on a rocky, root laden trail is just hell. It was slow going, but with the help of my remaining hiking pole, I got to the bottom, my knees aching.

Then, with four miles still to go, I discovered I’d run out of water. I rested before crossing a major road and climbing another, then across several grazing fields to Bamford. But when I got there, I discovered everything was closed, as it has a tendency to be after 5pm on a Sunday. I could have stopped at a house and asked for water, everyone in the region seemed very friendly, but I pushed on. Three miles to Hathersage. 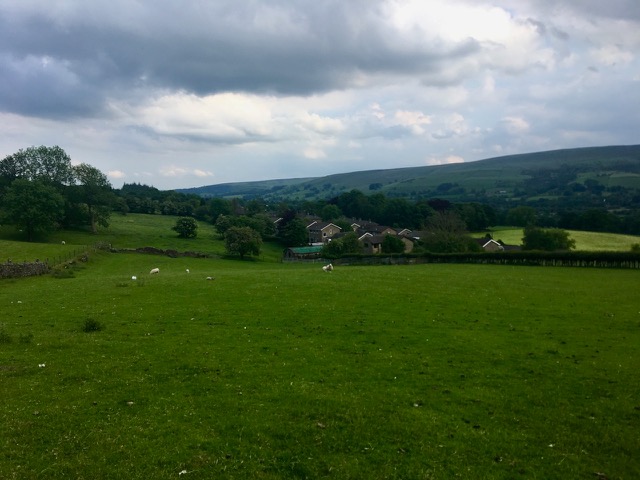 I headed out of Bamford and into a wood, past a water processing plant, over a short hill to a village called Nether Hurst then over one final small hill until I could see Hathersage below. I crossed several grazing fields and followed a road into the village. The hostel I was staying it was at the other end and, of course, up a hill. I made my way up there on sore feet and checked in for the night.