Day 3 – Laggan to Fort Augustus – 15 miles / 24 km
After a night in the softest bed ever, a great relief after 2 days of hiking, I set out from the hostel and ran into the two ladies I’d been chatting to most of the night before. We then walked to a local cafe a few hundred metres off the trail for breakfast and coffee. On the way, we stopped to take a photo of Loch Oich as we crossed on a swing bridge.

After eating, we headed back to the trail and began climbing the hill. As we walked and chatted we all but reached the top without noticing the climb, heading around a curve of the hill and heading back down. At the base of the path, the pair continued north while I split off to the east where I ran into the group of older walkers from the day before. I chatted with them as we crossed into Invergarry, where I stopped to look for lunch options. I didn’t find anything suitable after a quarter of an hour, so continued on. 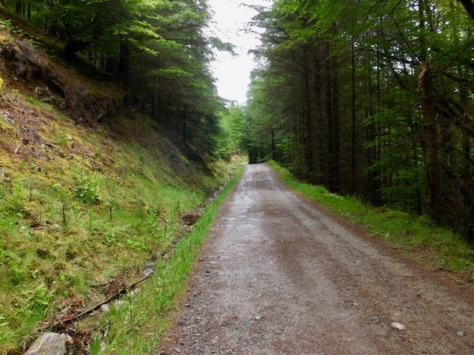 I climbed the path, a set of hairpin lanes that led up the to a forest road which I followed as it curved around above the loch. It wound its way through forest trails for some time as it slowly descended back towards loch level before climbing again into the forest. It was here I ran into the groups of older walkers and chatted to one of the group leaders until the path was wide enough for me to pass.

I came down to the A82 highway and followed it around to the swing bridge across the canal. Off to my left was the Oich bridge, an old now-closed bridge. On the swing bridge, I noted a sign for a cafe half a mile off along the A82. It was off the trail, but I was hungry, so I made the walk up the hill. After passing several signs over the 15-minute walk, I arrived to find it was closed Tuesday – Thursday. So I walked back to the swing bridge and took a break without eating. It was here I noticed a couple of what I thought were ticks on my leg. With tweezers, I removed them even though they had not dug in; I didn’t see any other the entire hike.

After the break, I marched on alongside Loch Oich as the skies began to clear. It was six kilometres to Fort Augustus. As I walked, I noticed I was on a path between the Caledonia Canal and the River Oich. They came very close on several occasions, and I even crossed a weir that allowed water to run off from the Canal into the river if it was too high. 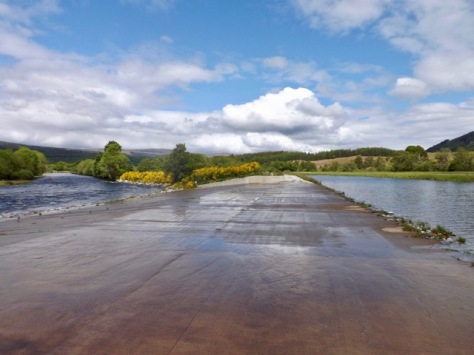 After an hours march, I arrived in Fort Augustus and located my camping ground. I set up my tent beside the father and son walkers I’d met on the first day and once done headed into town with them to a pub for dinner and a cider or three.

Day 4 – Fort Augustus to Invermoriston high route – 8.5 miles / 13.5km
After enjoying five ciders last night, I slept very well, somehow managing about 10 hours. But when I did wake in the night, it was raining, heavily at times. It continued into the morning. Today is the shortest leg of the six days; I held out until it stopped raining for as long as I could before packing up and heading out into town for breakfast. At the locks, I looked down the canal towards Loch Ness.

After breakfast, I headed out through town along a stretch of road still under construction until I found the trail and followed it up a hill into the forest. 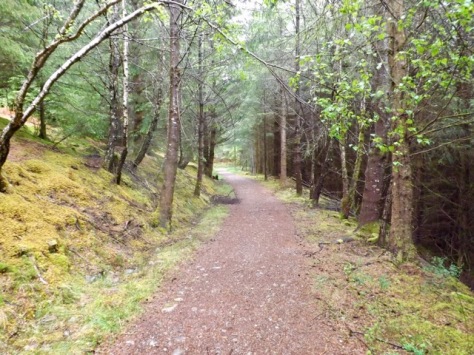 The climb was short and one of the first real climbs of the hike. I came out into a new forest road and followed this for about a kilometre until the high route began. The trail cut up the hill with switchbacks and steep climbs. It finally felt like I was hiking after so much loch and canal-side walking. After about five hundred metres, I came out of the forest and onto open ground. While the rain had stopped, the clouds hung low over the moors.

After about a kilometre the trail disappeared into the low clouds, and I came across the older walking group again. I stopped for a brief chat before pushing on. The low hanging clouds over the loch and the moors gave only the occasional view.

The trail continued for another 4 kilometres through open ground before dropping down into the forest again. After several switchbacks, the trail descended very steeply. With shaking legs under the weight, I contemplated taking out my walking poles. This was, after all, why I’d brought them, but I decided to suck it up and just did it.

At the bottom, the trail met with the lower route, but instead of following it to Invermoriston I headed the other way, back towards Fort Augustus. I walked along the low route for two kilometres as it again started to rain. The low route is simply a fairly flat forest road with no views and is very boring. It would be good for cyclists, but hikers would find little of interest here.

I soon found the side trail leading down to the camping site where I arranged to hand my tent in the drying room. While I waited for the rain to stop and my tent to dry, I showered. When I pitched my tent, I noted across the grassy camping area, the father and son walkers I’d met several times through the walk. With little in the way of food options nearby, I bought some noodles and a can of peaches from the camping ground shop and nestled into the tent with my Kindle to read for the evening.