In late August 2020, with the world still under the heel of the COVID-19 pandemic, I walked the Portuguese Coastal Camino de Santiago over 12 days.

With yet another hot day coming, I headed out from the hostel and quickly found a coffee and breakfast. I then headed to the beach and followed the wooden boardwalk along the seaside. It was just early enough for holidaymakers to begin making their way down to the beach. But, it would also be the last beach I’d see for the rest of the day as the path cut inland through suburban roads to the town of Marinhas.

I then followed backroads through several villages, with only the occasional view of the ocean. I came through the township of Belinho and crossed the main road, heading between two buildings with interesting stonework. The houses here are all very different, many are covered in patterned tiles or stonework. I’m told the tiling is very common in Northern Portugal.

I continued on for another couple of kilometres making my way to the Rio Neiva after which there is a stiff climb, the first on this hike. However, a recent flood had wiped out the bridge, so a detour took me well down towards the coast to another one. On the other side, the path led me back up the hill where I passed the Italian walkers I’d met the day before. I then climbed a hill near Castelo do Neiva, a church with a fair view along the coast and ocean.

The trail then led me up over a small peak – 155m – then through a eucalyptus forest where a sign pointed me to a house and a stamp. On the other side of the hill, I came to a large old monastery, Mosterio de São Romão de Neiva, where I stopped at a pilgrim’s stop for some water. There are many Pilgrim stops along the trail, with stone seats, water fonts, and sometimes pools to wash clothes or dip hot feet into.

Then, after the township of Chafé, I climbed a steep set of roads and came down with a view of Viana do Castelo across the Rio Lima, including the church on the hill, Santuário de Santá Luzia.

And a closer look…

I crossed Ponte Eiffel, a bridge built by Gustave Eiffel, I’m sure I don’t need to mention any of his other projects. The bridge is near a kilometre long with a thin walkway on either side. My accommodation was right on the other side, so I got a good shot of it from the other side, including the bay.

At the hostel, I had originally booked a bed in a 20-bed room, but due to COVID, they had closed it, upgrading me for free to a room with four beds, which I had all to myself.

After breakfast at the hostel, I headed out through town following the high route, which passed below the Santuário. After a couple of kilometres on the same kind of road with only the occasional view, I decided to detour down to the beachfront, where I passed the remnants of several windmills. With the wind off the ocean, it was cooler than on the higher path.

Then after an hour, I climbed the hill at Carreço back to the higher road for another impending climb. As the Camino has few ascents, I treasured any climbs as they usually come with views. 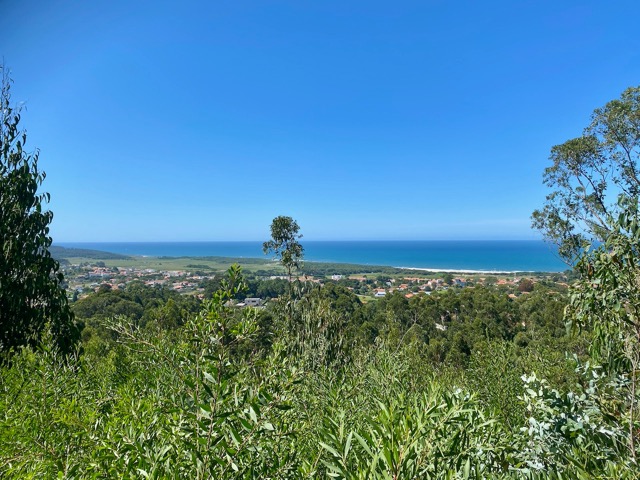 On the other side of the hill, I walked into the town of Âncora and then to the beach – Praia de Âncora. With the heat continuing to rise, I again enjoyed the cool ocean breeze.

I followed the trail along the beach for a couple of kilometres into Moledo where I had my first sight of Spain and Monte de Santa Tregá.

I followed the road around and into town where I spied the word “stamp” in yellow on the ground along with an arrow pointing to a balcony. On it, a strange man was smiling at me and offered me a stamp which he assured me was free. We chatted for a bit before I again headed on. The remaining 5km into Caminha was a flat and straight road. That evening I ate a cheese and sausage platter for dinner – why not – before going for some beers with an Italian guy I’d run into a couple of times. But, like many others I’d met in Portugal, he wasn’t crossing into Spain due to the much higher COVID rate.

As it’s Monday, the ferry to Spain doesn’t run, but the guy at the Albergue told me I could catch a water taxi from 8 AM. I went down to the harbour at 9 AM, but no-one was there. 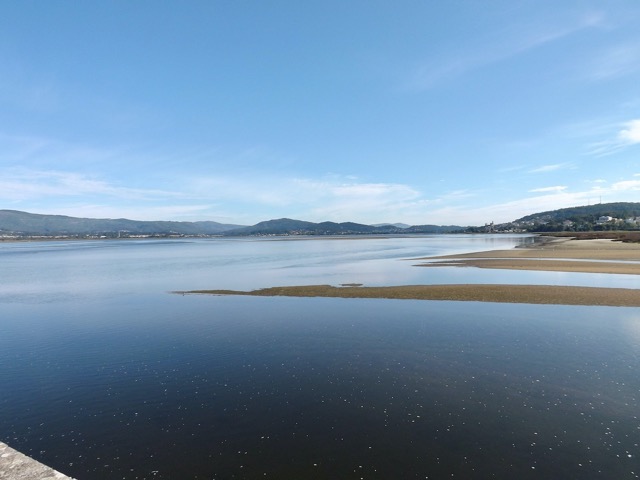 I went for a coffee, and when I came back, other pilgrims were also waiting – two Spanish guys and a Swiss girl. Eventually, the four of us were able to catch a water taxi across the harbour. 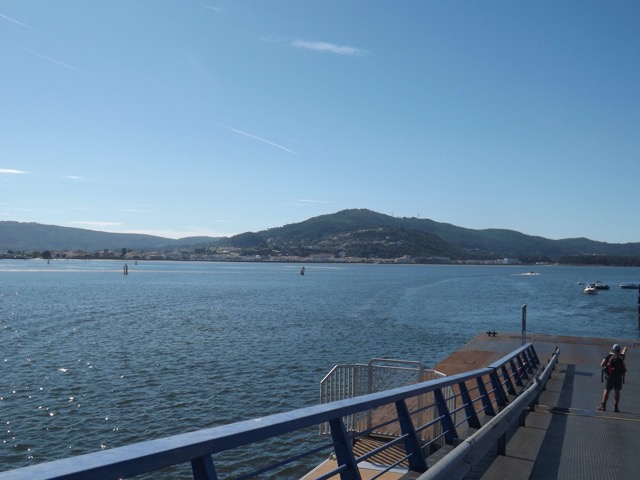 We arrived in the sleepy town of Camposancos, where the path took us up the hill. It didn’t climb too far before heading us down again to A Guarda, a seaside town with plenty of charm. Now I’m in Spain, the clocks have gone forward an hour, and it’s already lunchtime. But by the time I got to the end of the town, I’d neglected to get anything so decided to get something at the next village. I left A Guarda passing a beach with some topless ladies, something I discovered is common in Spain. 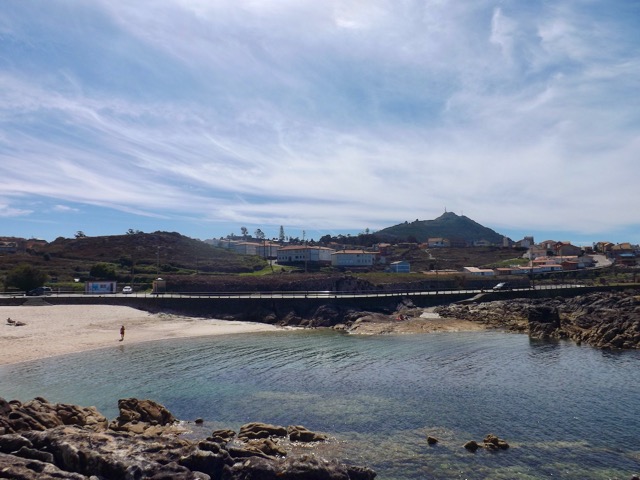 There is no longer wooden boardwalks, the trail is now along a rocky path. Also, Spain has a more strict mask-wearing policy, so I have to be more vigilant. The trail led me along beside the sea for sometime before climbing up to the road, then a couple of kilometres further on returned me back to the beach. 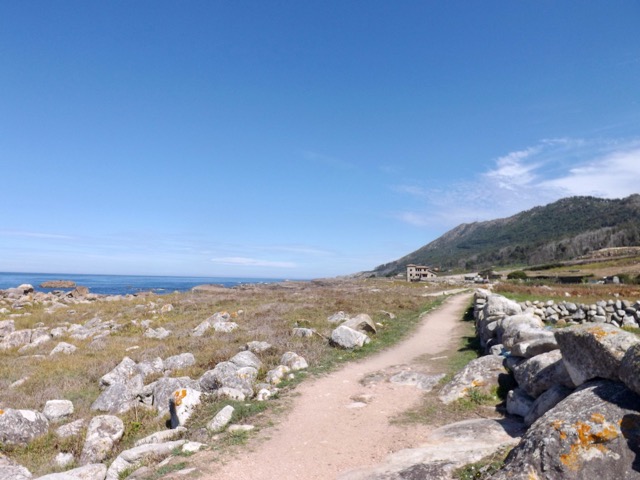 After 6km I came to Portecelo, but there were no shops in the village, so I kept walking. After another 6km I arrived in Oia where there were 2 restaurants, but as it was only mid-afternoon, I grabbed a bag of potato chips and a coke. 4km further on was my stop for the night, Villadesuso and I got settled into the Albergue.

Compared to Portugal, the Spanish speak less English, so it was time to put my Spanish lessons to the test. I found a restaurant in a hotel with special peregrinos rates: €15 for 4 courses, including a drink. However, the waitress spoke no English, but I managed to get by with my limited vocabulary and even managed a short conversation. Then it was back to the hostel and bed.