In Late August 2017, I walked the Sandstone Trail in Cheshire Northern England. See here for part 1 of my walk.

After a healthy breakfast at my B&B, I was dropped off back at the trail by my most insisting host. I headed out across fields that stunk of nearby farmyards. Then through a wheat field with the view of Beeston Crag ahead of me. 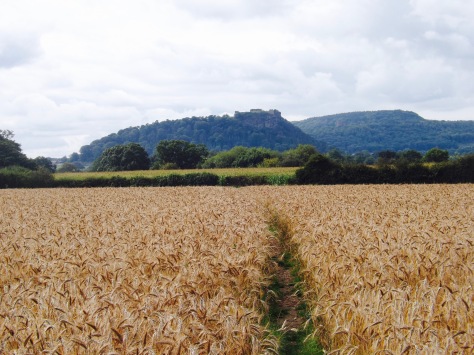 For the next couple of kilometres, I marched across fields to eventually emerge onto the quiet Pudding Lane, named because someone on the road stole a large quantity of milk to be used to make pudding!? With Beeston Crag ever in front of me, I came down to a canal at Wharton’s Lock and crossed over on a stone bridge. 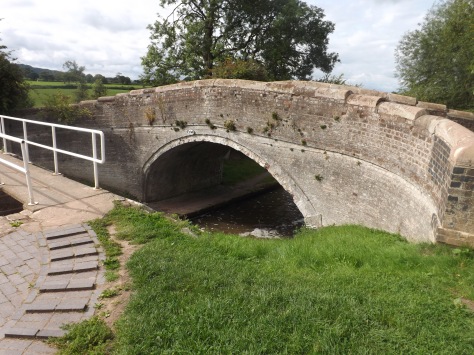 And then soon after under a railway bridge. 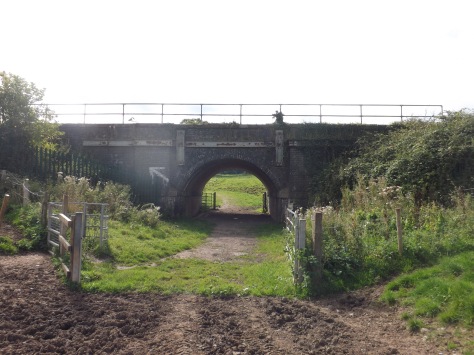 At the base of the crag, I followed a road up and around to the rebuilt entrance of the castle ruins. 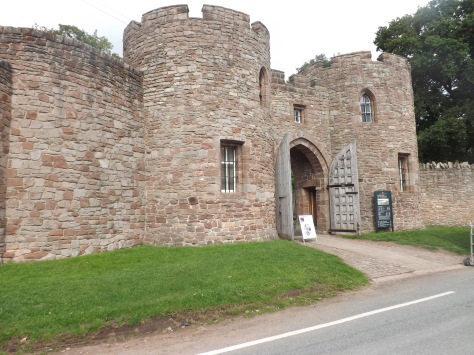 I paid to get in and entered to find a large open grassy section within the walls. There were plenty of people hanging around and eating lunch on the grass. I followed a wide path towards the upper section. 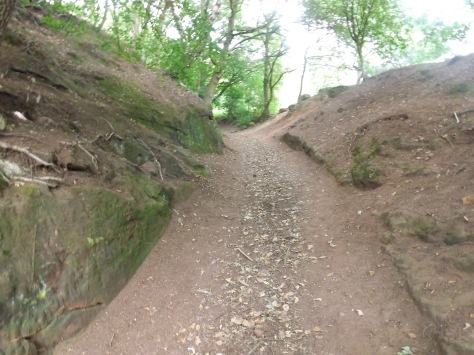 I then came to another protective wall, this time the original, with its main section smashed in. 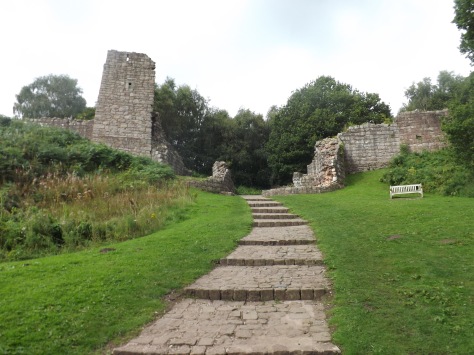 Beyond that was another large grassy area surrounded by the walls. At the far end of the grassy area was the moat with a newly built bridge leading across and into the main castle ruins. 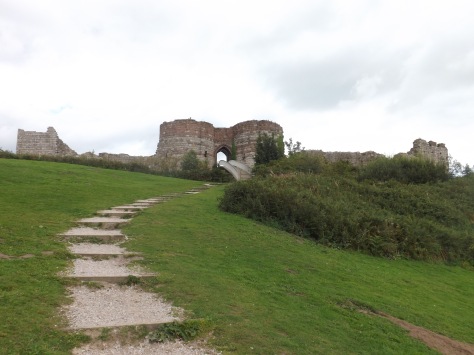 The open area within the main castle grounds is quite large and the ground is very uneven. I sat and ate the lunch I’d brought with me enjoying the view. The views were almost 360º and definitely a good reason to visit. I can only imagine what the land would have looked like in the 1220s when the castle had been erected. 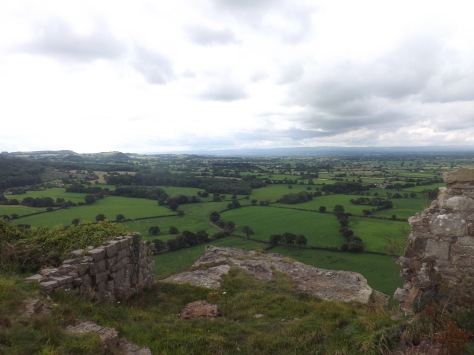 Inside the main ruins, there is England’s deepest well.

Beneath the castle crag, there are sets of caves that have long since been blocked off. After my visit, I left the crag and headed out to the south across fields and small roads heading towards the tree covered Peckfordton Hills. From within the trees, the top of Peckforton Castle could be seen although I was unable to get any closer. I later found out that some distant cousins had been married in this very castle not so long ago. 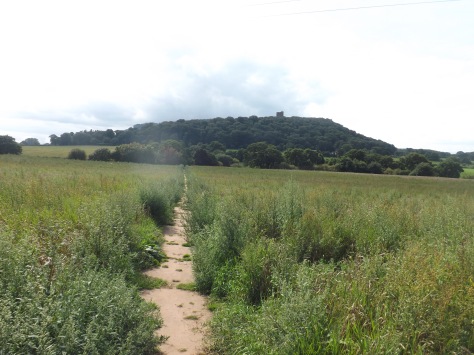 The trail followed a road for a short distance before climbing around the back of the hills with a steep climb to the top. It climbs over to Hill Lane before heading south and across Bulkeley Hill where i passed several other walkers, both doing the hike and just casually walking their dogs. I stopped for a break at a viewpoint called Name Rock with many sets of initials scratched into them. 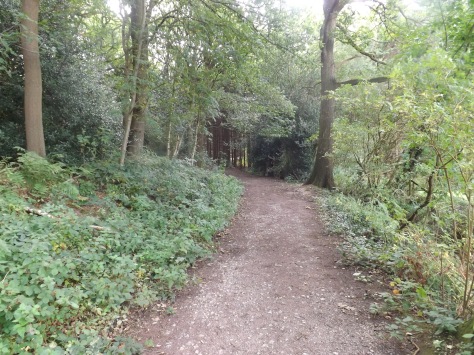 I then climbed down the hill, crossed a small field then climbed up another hill, past an overgrown quarry and around the top of a cliff where smaller trails descended. Below there are a series of caves called Queen’s Parlour but as it is on private property it was not worth the climb to see it. I continued to a viewpoint and stopped for a look. 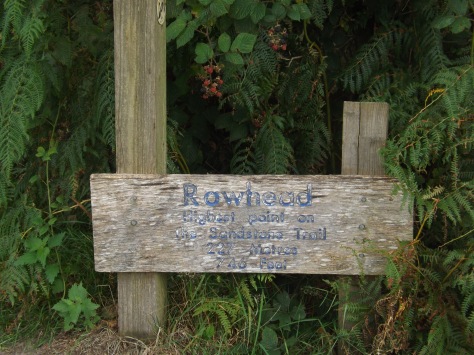 I then headed up the trail to a monument with a very small viewpoint at a place called Rawhead, the highest point on the Sandstone Trail. At 227m, it’s not particularly high.

I then crossed several fields belonging to Chiflik Farm and the associated animal dung that goes with it, until I reached the A534 highway and quickly crossed. For a short time, I walked along a road down past Bickerton Farm, on to Bickerton Church before beginning to climb Bickerton Hill. As I climbed I came to another viewpoint that looked out to the North… 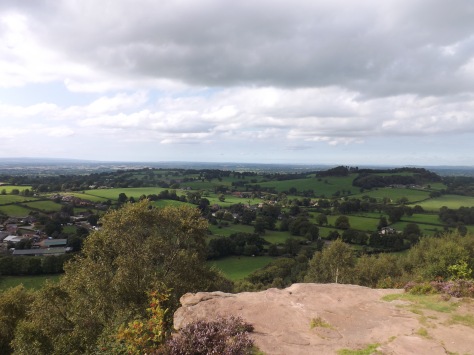 …then on past a place called Mad Allen’s Hole, where an old Hermit used to live. The trail then curved around to Kitty’s Stone. A memorial with poetry on it dedicated to someone named Kitty. 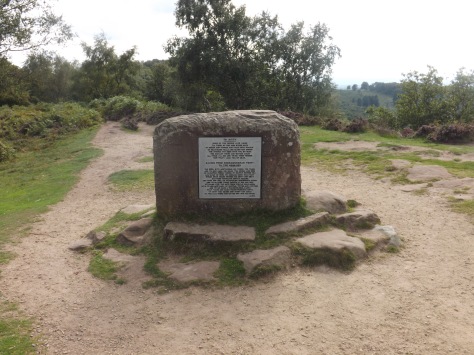 The hill then dove down a dip before climbing the other side to Larkton Hill and another view point. The on to another Iron Age fort (there are six along the trail) called Maiden Castle, where again little more than the ramparts could be seen. The trail then headed down to a carpark where the Sandstone Ridgeline and the walk originally ended, although it is inaccessible if you don’t have a vehicle waiting for you. To make the trail more accessible, the end point was moved some 10 miles further south to Whitchurch, with its major train station. The trail continued around the base of the hill before crossing a field. 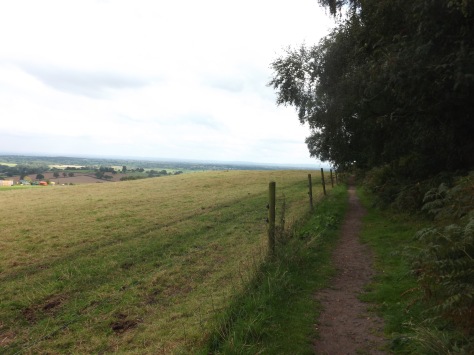 The remaining 2 kilometres of the walk for the day I crossed the farm paddocks and walked around a race horse training centre before coming out on the road that would lead to my evening’s accommodation. While this B&B was accessible to the trail, it was some distance from anywhere to eat. I was able to borrow a bike and ride to the local pub 15 minutes ride away. While it seemed like a good idea, after a long day’s walk it was harder work than expected.

The next morning, I set out from the B&B along the road to where the trail cut again across a series of wheat fields… 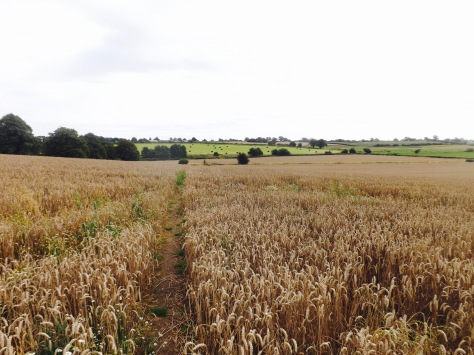 And then again through a corn field where a hidden church could be seen above the corn. 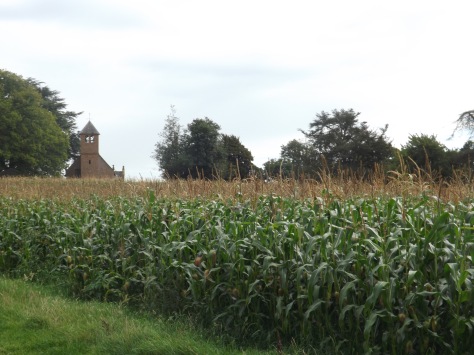 I then continued across grassy paddocks to finally come out on a canal and Willeymoor Lock Tavern where I stopped for lunch. 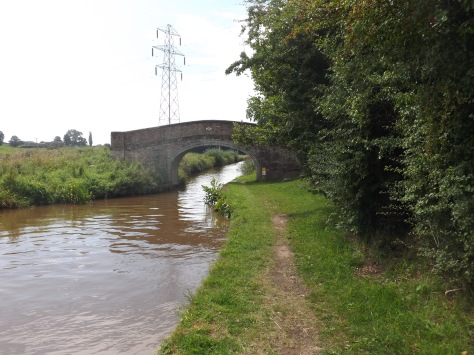 The remaining five miles was along the canal, which I marched double time, passing several sets of locks and canal boats before emerging into Whitchurch. 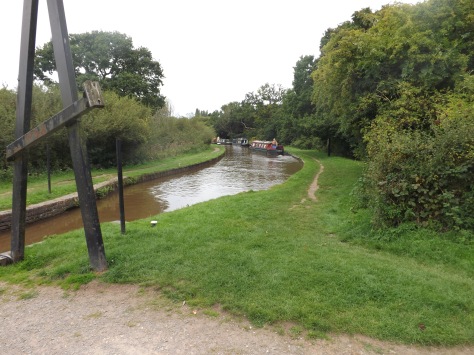 I followed the trail through the streets to Jubilee Park and a Sandstone arch denoting the official end of the Trail. 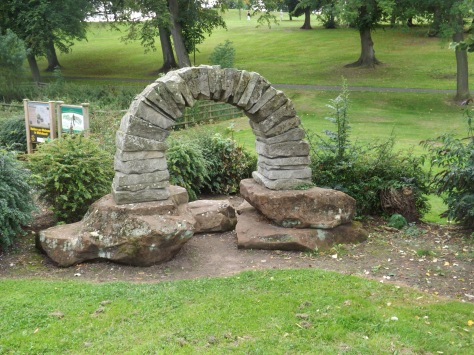 The Sandstone Trail is a great walk in Northern England, very accessible with great views of the land and of course, it’s central beacon the Beeston Crag and castle ruins.

While it lacked easily accessible camping grounds, there were plenty of B&Bs to stay in and plentiful pubs and food opportunities along the way.