It rained overnight, and that left me expecting the worst from the weather today. But thankfully, the sun came out and decided it liked the day, so stayed. There were plentiful clouds, which kept the temperatures down but with little wind. Overall, an awesome day to hike in the Lake District.

I left the hostel and walked down through the village towards Lake Buttermere. Ahead I could see several groups of people and hoped not to get stuck behind any of them. 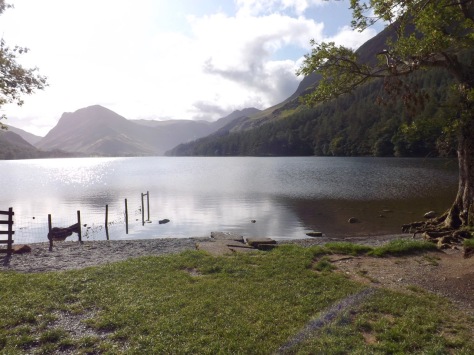 I quickly passed a group of six teenage girls that were taking off their clothes on the side of the trail. If only this were a regular thing on hikes! Alas, they were a group of schoolgirls doing a group exercise? They had overdressed for the day and were removing excess clothing. I continued on along beside the lake.

At the end of the lake, the trail cut steeply into Buttermere Fell. I took a shortcut, and when I rejoined the main path ran into another group of teenage girls, these were sweaty from having climbed the steep trail. I wished them well and continued climbing. 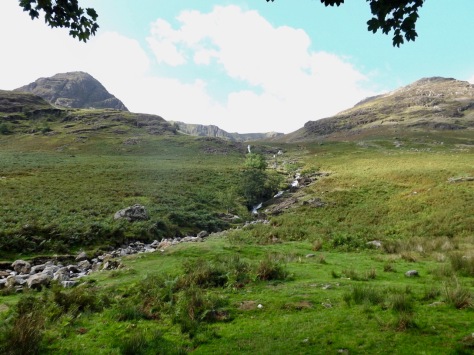 Today is the fourth day of this hike, and my body is so used to the effort it just does what I need it to do. While my legs are still a little sore, they just seem to power up the hill without too much effort.  I stopped about a third of the way up for a shot back along the Lake Buttermere. 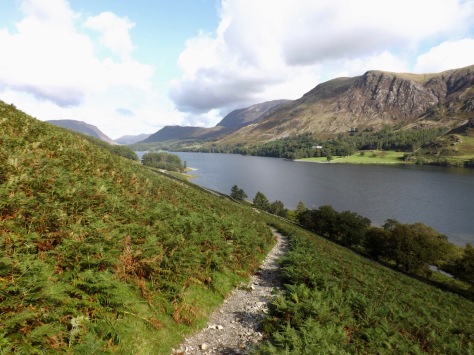 Before I knew it, I was through Scarth Gap and crossing the pass towards the other side. For the most part of the hike today the trail had been rocky or covered in slate.

I came down the other side of the pass and headed down into the next valley River Liza running strong along it amidst Ennerdale Forest. I followed a fence on a path made from large cobblestones, and stopped for a for a break, taking my boots off. 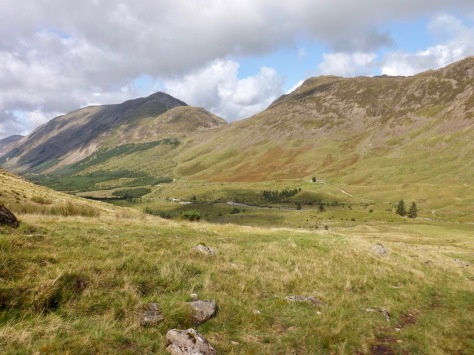 After a few minutes, I continued down into the valley. I note on my map a hut along the way, and as I got closer, I noticed it was occupied. When I arrived at it, I discovered it was a YHA, the most remote YHA in the UK. I stopped for a coffee and ate my lunch. Ahead, I guessed my trail led me up beside the stream called Sail Beck, in the middle of the photo.

It was taller than the previous climb, and the trail was less obvious, but after 30 minutes I was at the top and looking down wondering how I’d got there so effortlessly. The path was at times boggy, and sometimes I had to scramble up some rock, but nothing too strenuous. At the top, I looked down at the trail on the other side, which was made mostly of stone steps. 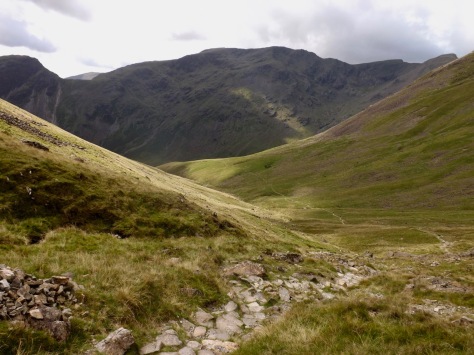 I climbed down into the valley, passing several hikers, and stopped to chat to the leader of the two groups of girls who were waiting for them. The sun came out again, and I looked down along Mosedale to Yewbarrow in all of its rocky glory. 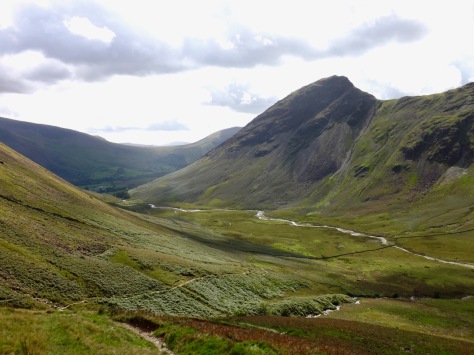 At the end of the valley, the village of Wasdale Head and a low pass over Sca Fell, where I would be climbing out of the valley. I stopped at the Inn for a cider and took my boots off again. Pro tip: regularly dry off the feet, socks and boots by taking them off. This helps to prevent blisters, especially on hot days. 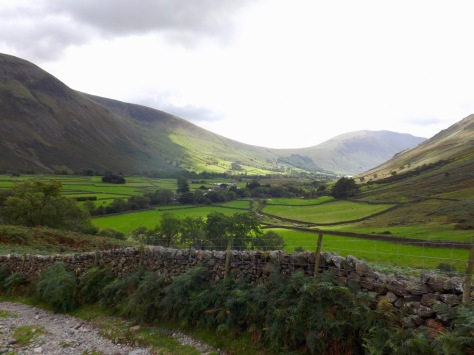 After my drink, I packed up and headed off again for about two kilometres before heading up the Sca Fell. While I was crossing the fell known as Sca Fell, I did not climb the main peak, which is the tallest mountain in England. After a while, I looked down on Wast Water, the deepest lake in the Lake District at 79 metres.

When I reached my highest point of the fell, the ground was a lot boggier, and I had to dig my boots out of the bog several times, but after a mile or so I came to Burnmoor Tarn. At the tarn, I realised that my hostel for the night was more than a mile from Boot, my planned destination. So, I chose another trail that would take me closer.

This, however, led me across a lot more boggy ground and a footbridge…

…towards Eel Tarn and a lot more boggy ground.

Eventually, I got close to the tarn and ran into a man who looked rather lost. I showed him the map and sent him on his way, then skirted the tarn and headed onto a more rocky trail. This led me down to eventually come out at the Woodpack Inn, just down the road from my hostel. 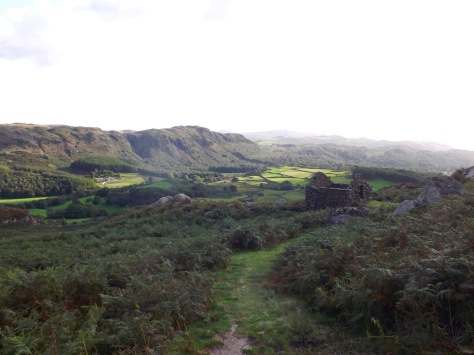 A long day climbing may hills, but with my body in a good state, I’m looking forward to the next three days.

After the full day of rain yesterday, the weather was supposed to clear up for the rest of the week; ‘was supposed to’, being the operative statement here. When I awoke at the hostel, it was raining and would continue to do so for most of the first part of the day. What’s a hiking man to do but strap on his pack and get out there.

I walked out from the hostel during a pause in the rain hoping it had stopped for the day, but alas, ten minutes down the road, the rain began again. While it wasn’t heavy, only a gusty drizzle, it was annoying. I followed the River Derwent for a while before it headed up Tongue Gill. I was somewhat thankful for the cool weather as makes it easy to climb. Not far up the valley I stopped and looked back on Rosthwaite and in the distance, the valley I had come out of the day before.

The gill ahead looked arduous, a steady climb all the way, including the wall at the end. What made it more difficult was that for every 10 minutes I walked, I spent 5 minutes hovering either behind an old slate wall, in the opening of a mine or a cave, waiting for the gusts and drizzle to subside. Along the way, to help out the climb, there are many slate steps. Towards the top, there are more broken down buildings and mine shafts. I ignored them as it is never a good idea to explore old mines.

Once at the top of the steep, wet, slate steps, I pulled out the hiking poles, this time to stabilise myself at the top in the somewhat extreme gusts of wind. The plateau at the top is boggy, and I sloshed across it, my boots filled by water already, only an hour into the day. I climbed over Miners Crag and Red Crag on my way up High Spy, the wind and rain continuing to pelt at me. Eventually, I arrived at a large cairn marking the top point of my climb.

From here there was a long walk across the top of High Spy and Maiden Moor in the relative peace and solitude. It is difficult to take photos with the persistent rain, but I was able to see down into the next valley during clear moments.

Towards the end of Moor I began to see people coming out of the mist, then when I came over Bull Crag, I looked down towards Derwent Water. Ahead more people climbed towards me and many more standing on Cat Bells, the small peak at the end of the chain. I would not be going that far along as my trail headed down to the left before it. 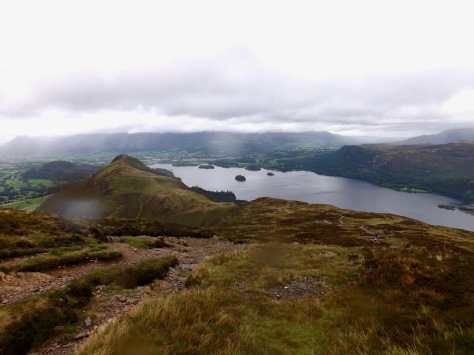 After a series of muddy descents, I followed a trail down and away from the mass of day climbers. Ahead you can just make out people on the top of Cat Bels. 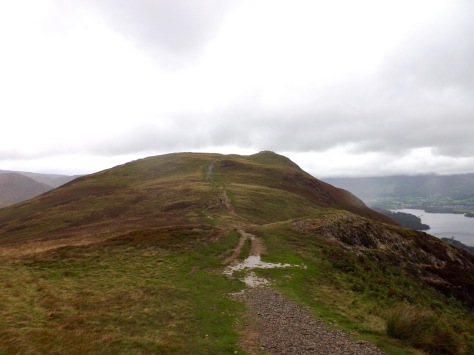 My descent took me down into the valley I had seen from High Spy. 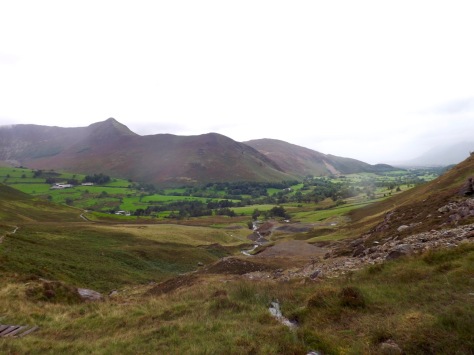 I eventually came down to a path and the sun fought its way out of the clouds to welcome me. I followed the trail to Little Town, which is only a village, where I stopped for a coffee break in some tea rooms.

After my break, I set out again around the valley, following the base of the Cats Bells. Instead of climbing and being beaten by the wind and rain, I got a pleasant walk across some paddocks, avoiding sheep and cow dung, before heading out along some country lanes. 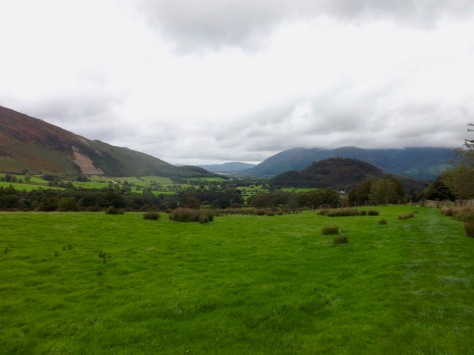 But as I crossed the valley, my next climb loomed, climbing the valley alongside Stonycroft Gill between the Barrow on the right and Causey Pike on the left.

With sore legs after the past two days, the long slow climb was quite a slog. 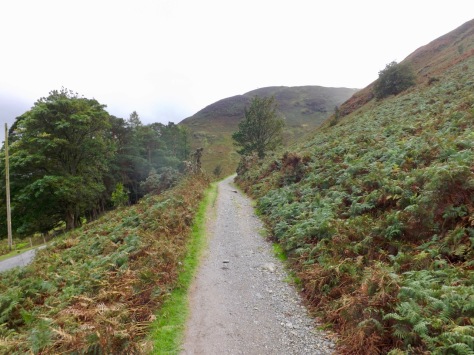 I turned the bend and headed up the valley, slowly. The sun decided to show its face finally, and things began to warm up. On sore legs, I pushed on.

Darks clouds amazed behind me as I looked back along the trail to the valley.

I pushed on along the rocky path, always climbing. I passed a steep climb to the top of the pass and chose to continue on towards where the trail doubled back to a flatter trail. I finally arrived at the Barrow Door, between The Barrow and Stile End, where I looked down upon Braithwaite below me.

For the last 20 or so minutes I quick marched down into Braithwaite. On arrival at my hotel, I checked in, got an upgrade to a double room and got set up for the evening, including a well deserved hot bath to ease my aching legs. Tomorrow is the shortest day of this hike with only one major climb.