In late January 2020, I headed across to Cardiff for a concert and decided to stay for a couple of days to explore the city. As it’s winter, and Southern Wales, I was expecting rain, and I was not disappointed. But I’m waterproof, and a bit of drizzle wasn’t going to stop me enjoying my stay. 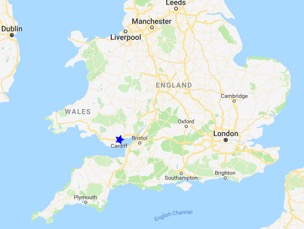 Cardiff (Caerdydd in Welsh) is the largest city in Wales, but only the 11th largest in the UK. And, as it’s only a 2-hour train ride from London, it’s not that much of a trip. The first thing I noticed when arriving in the Welsh Capital is the number of covered arcades and malls. It’s a great way to explore the city without going out in the rain too often.

Motorpoint Arena
The point of coming to Cardiff was for a concert. Motorpoint Arena was first opened by Shirley Bassey in 1993. But my concert wasn’t as sedate, I was there to see Megadeth and Five Finger Death Punch. Metal, raw and loud. The venue was large, holding 5,500 on the floor. After a very long wait out in the icy conditions to get in the door, I eventually warmed up and enjoyed the concert. The venue, like most in the UK, is heavily sprinkled with alcohol sales points, although the crowds in London feel a little more raucous.

Principality Stadium
Also known as Millennium Stadium, it is the home of the Welsh Rugby team and was built in 1999 to host the Rugby World Cup. The stadium in it’s latest form was constructed over another park which has a more sentimental note for me. When I was very young, I would sometimes get up at stupid times in the morning with my father to watch the All Blacks play at Cardiff Arms Park. The Six Nations Rugby was just beginning on the day I came back to London.

Cardiff Castle
You can’t come to Cardiff and not visit Cardiff Castle, and the best was to see it is on a self-guided audio tour. Beneath the entrance and front wall is a small museum called Firing Line, showing the lives of Welsh Soldiers going all the way back to the Bronze Age. Next to the museum is a long bronze wall depicting scenes from Roman times opposite the actual remains of the Roman wall.

Beneath the other walls are tunnels used during World War 2 as bomb shelters. They are long, dim-lit and eerie. On the far side of the grassy courtyard is the Norman keep surrounded by a moat. Climbing up to it, and then up its main tower gives excellent views across Cardiff.

Then along one side of the castle grounds are the Castle Apartments and Clock Tower. The self-tour allows access to some of the rooms in this building to see their lavish designs.

Roath Street Art
While Bristol is home to Banksy, Cardiff is also a hub of street art. With limited time, I chose to walk out to the suburb of Roath to check out the local street art. 2014 was apparently the big year in the suburb for street art. There are many pieces still evident on walls around the area (although some buildings have since been demolished and the artwork lost).

But while walking the streets of Roath, I discovered hidden back alleys absolutely filled with the less creative street art. By less creative, I refer to large words in different fonts. Sure, it’s art, but is it that creative? 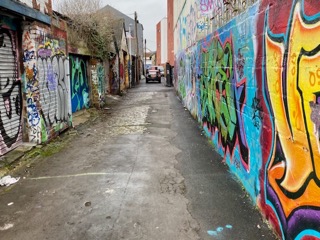 The Animal Wall
Just along from Cardiff Castle and near the entrance to Bute park are a series of 15 stone animals ‘peering’ over a wall that has come to be known as the Animal Wall. They were based on drawings from the 1300s, were carved in London, and built into the wall in 1887. 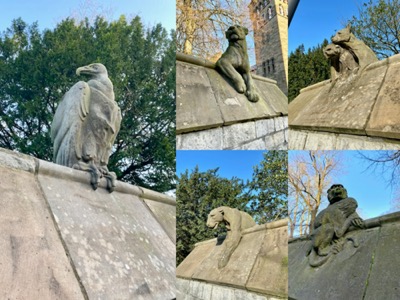 Bute Park
Once the grounds of Cardiff Castle, Bute Park is 130 acres of landscaped gardens and parkland. It runs from the castle at one end, along to Gabalfa Woods at the other. Scattered throughout the park are various sculptures, many made from tree trunks left just for that purpose. There’s also a rock circle just past the castle, the Gorsedd Stones which were placed for the National Eisteddfod (a bardic arts festival) in 1978. 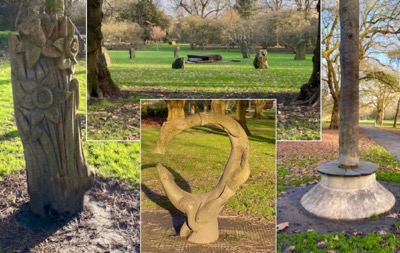 Welsh National War Memorial
Completed in 1928, the memorial stands in Alexandra Gardens and commemorates the servicemen who died in the First World War. A plaque was added in 1949 to commemorate those who died in World War 2 also. The memorial houses four bronze statues. The three around the base of the main plinth relate the three services, airforce, navy and army, while the figure on the plinth represents Victory. 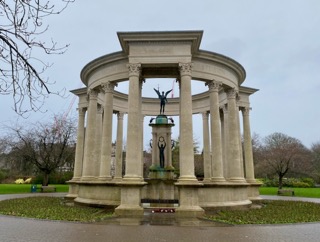 City Hall
To avoid the rain, I popped into the City Hall near the War Memorial and stayed to have a look around. I found my way up to the first-floor landing, which is known as the ‘Marble Hall’. Beyond the marble columns, there are nearly two dozen marble statues around the walls. Only one stands in the centre, the figure of Saint David. There are also various paintings around the halls, while most are landscapes, there is one of Prince Charles and another of Princess Diana.

Cardiff Story Museum
Situated in the middle of the city centre in the old library building, the small museum tells the story of Cardiff. The museum contains more than 3000 donated objects relating to the life and times of Cardiff from its inception to current times. There’s much interesting information on the layout of the city over the years and a look into the lives of people who live there. While it’s small, it’s an excellent way to get to know the city on a rainy day, and it’s entirely free.

National Museum and Art Gallery
Next to City Hall is the much larger National Museum and Art Gallery. Like the Cardiff Story Museum, it’s free and is something to do when it’s raining. With many large open halls, and several passageways between, there is plenty to see. The gallery holds many paintings by Claude Monet, along with several from Rodin, Van Gogh and several Welsh artists. The museum has an exhibition on the fossil swamps of over 300 million years ago. There are also photography exhibits from several different artists and a detailed history of the universe from the Big Bang to how Cardiff was formed. I managed to lose about three hours wandering around the halls, but at least I stayed dry. 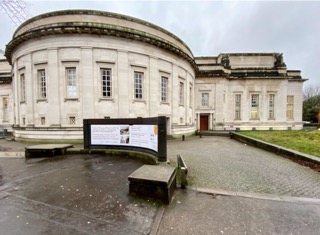 Cardiff Bay
With a couple hours to spare before my train back to London, I wound my way down to Cardiff Bay for lunch and a quick look around. Thankfully, today I was treated to the sun, a nice farewell for the trip. The bay area houses Mermaid Quay with its plentiful restaurants and cafes, along with the Millennium centre, The Senedd and the Red Dragon Centre, a movie theatre complex.

Overall impressions
Cardiff is a great small city with just enough of a vibe to make it an enjoyable stay. There is plenty to do for a couple of days in summer or winter. There was more I could have investigated, but due to time and the rain, I didn’t get the chance.

Next, I’m off to explore Liverpool at Easter,