I had some trepidations about climbing Tibrogargan as it’s listed as a Class 5 with some scrambling and steep rocky faces, but it’s on the list so I wanted to do it.  I set out with a colleague and we drove to the Glass House Mountains.  Mt Tibrogargan is one of the more prominent of the mountains and is said to look like an ape. 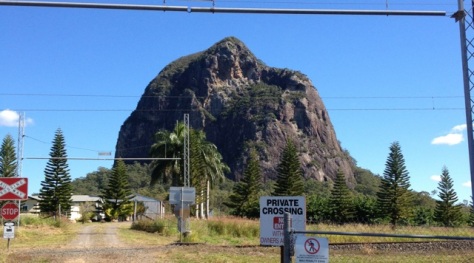 The walk to the base is along a fairly standard gravel path that turns rocky and begins to climb slowly towards the base.

It’s not long before Tibrogargan appears out of the trees and you are confronted by the first rock face.  It’s literally climbing rock face after rock face all the way to the top.  There are no nice steps formed in mud and tree roots, it’s all rocky.  It’s not so steep that rock climbing gear is required, but definitely not for the faint hearted.

My companion felt discouraged early and chose to return to the bottom, which is understandable, as it’s a daunting prospect.  I, however, pushed on. 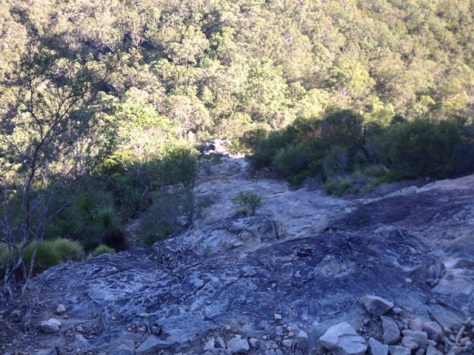 There were some points on the way up where I felt nervous, but I didn’t let them hold me back and kept climbing.  The views were good on the way up, but you don’t spend much time looking around while climbing.

At the top, there’s plenty of scrub and the views aren’t so apparent.  I did get the odd photo, but compared to Mt Ngungun the view is mainly hidden behind trees.  At the top I ran into a woman fossicking in the bushes.  Apparently she was looking for a geo-cache – a box someone has set here at a certain GPS location.  I fossicked in the bushes with her for a while looking for it but after a while we gave up and climbed back down.

It was good to have her along as she’d done this climb on many occasions and gave me guidance on the best way down.  She also told me about the aboriginal history of the Glass House Mountains.  Then at the bottom, I bid her farewell, collected my companion and we headed off to the next mountain.

It was as easy as expected and didn’t take us long to reach the lookout at the top.  The views are nothing short of spectacular.  You can see all the Glass House Mountains, the scenic rim and out to the sea on the other side.

The Glass house Mountains Lookout is at the western end of the Glass House Mountains and while not actually climbable, it does have an 800m bush walk through the forest.  In general the views were not a good as those from Wild Horse Mountain and there wasn’t much to see along the walking trail.

To cap off the day we drove to the base of Mt Beerwah, passing the unclimbable Mt Coonowrin. 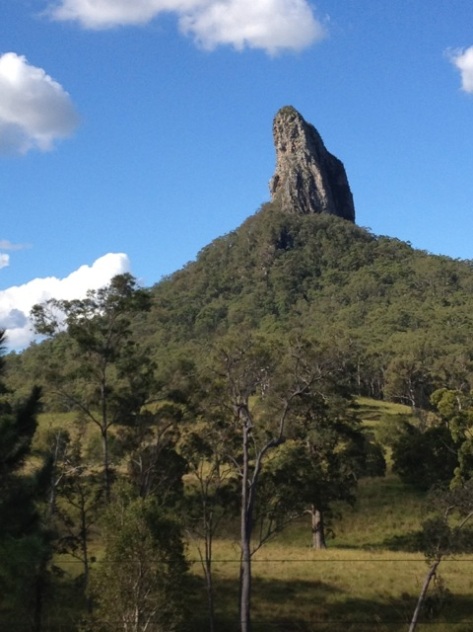 Mt Beerwah is more daunting than Mt Tibrogargan, but due to a rockslide that has blocked the path it was deemed too dangerous and closed.  As the tallest mountain in the National Park it would have been nice to have climbed it.  I’m told it is a similar experience to climbing Mt Tibrogargan. 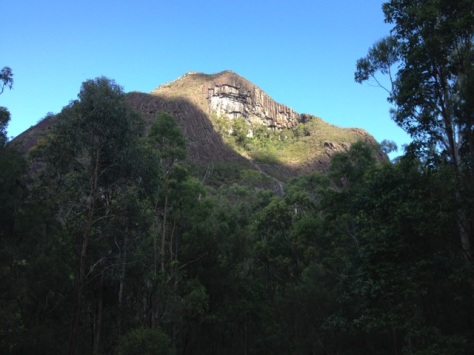 There were several more walks in the Glass House Mountains I wanted to do and came back twice more to complete them.  Details can be found here: Mooloolah River, Dularcha NP, Tibrogargan and Trachyte Circuits and Mount Tunbubudla East.

One thought on “Glass House Mountains – Mt Tibrogargan and beyond”