As the first part of my three month adventure around the lower states of Australia, I drove across country to Adelaide, South Australia. To get there, I traveled 2,058km and set foot in four different States, all over the course of 3 days.

For the trip, I bought what I call a sleeper van. Henceforth known as the Pointy Brick. 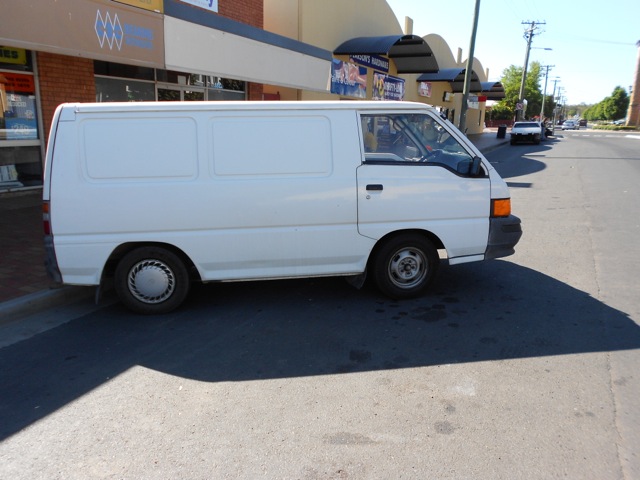 It’s a ’96 Mitsubishi Express kitted out with a bed in the back and storage under the bed for all my needs. I bought the van from a backpacking couple that had just driven from Darwin to Brisbane without issue. I picked it up 2 months early so I could get the feel of it, and get it prepared for the trip. Over the course of these prep months, I took it to various national parks around South East Queensland. I put it through its paces and it survived. 2,058km is a long way in an old van, so I had it serviced before I left, just to be sure. The one thing I’m aware of in the Pointy Brick is its small gas tank, meaning I’d have to manage my fuel and fill up often.

I headed out of Brisbane on the morning of November 10, 2012 in the pouring rain.

Yeah, goodbye Brisbane, I know it’s sad that I’m leaving, but you don’t have to cry about it… I headed out onto the Ipwich Motorway, pointed myself west and drove. The motorway was pretty quiet as I headed along a familiar stretch of road heading for the Main Range mountains. The rain slowed as I passed through Cunningham’s Gap and headed on to Warwick. The spires of the Main Range were some of the few mountains I was to pass on this journey and I took a last few pictures as I drove through. 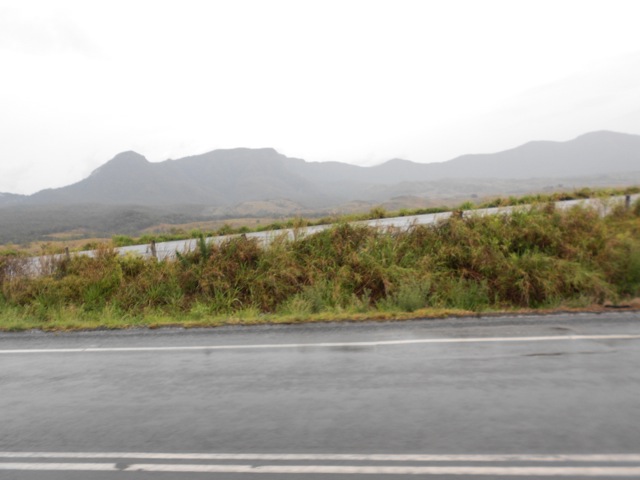 I passed Warwick shortly after and continued west along a road I had not travelled before. While the weather kept up its farewell the Pointy Brick had no trouble dealing with the wet weather and didn’t leak. With music blaring, I continued on the Cunningham highway to Goondiwindi on the New South Wales border. By this time the rain had stopped, but the clouds still remained. The entrance to the border town had a yellow blossoms strewn across the road. I filled up and headed back out and across the border. 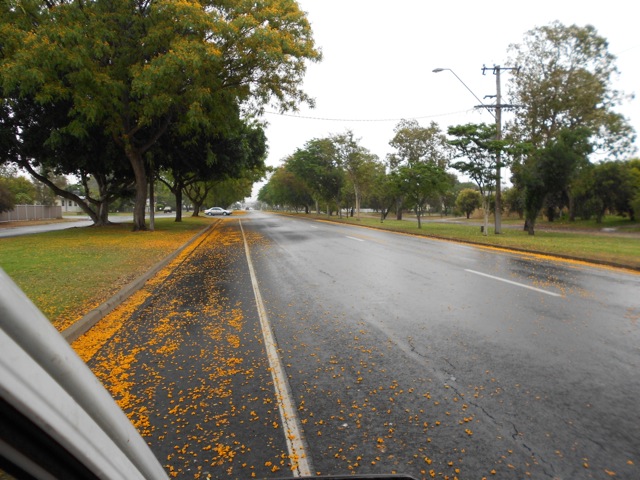 In NSW, I followed the Newell Highway south and straight away noticed the change in road conditions. For the most part, the roads are good in NSW, wider and better maintained. The speed limit on the highway is also 110km – which is something I had only seen on 2 Queensland Motorways. 110km/h is a big number for the Pointy Brick. I’ve had it just over 120km/h, but since I didn’t buy it for speed and power, I was not worried. On either side of the road are large fields of wheat for as far as the eye can see. There is the occasional tree, but otherwise wheat all yellow and wavy. This is pretty much how it was for more that 200km as I drove through Moree to Narrabri. Near Narrabri are some mountains – Yay! – but only a couple. And if I was ever back this way I wouldn’t mind climbing Mt Kaputar. 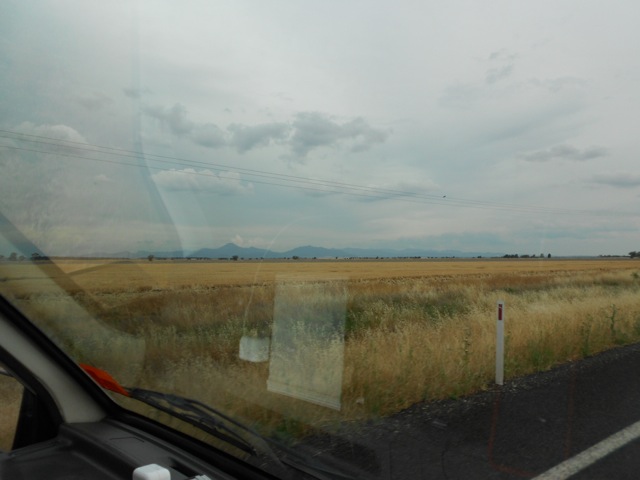 This is Australia and of course you see a lot of kangaroos. They are everywhere and I think I must have seen more than a hundred of them. It’s not as cool as it sounds, though as I only saw two that were actually alive. That’s right. The rest were roadkill. Some were months old, others only days. All of it sad.

After Narrabri theres a large forest and nature reserve, which was a change of scenery.

I eventually arrived in Coonabarabran at 7pm, which is after dark in Queensland, but not so in NSW because of day light savings. I cooked dinner and settled in with a glass of wine and watched something on my laptop. 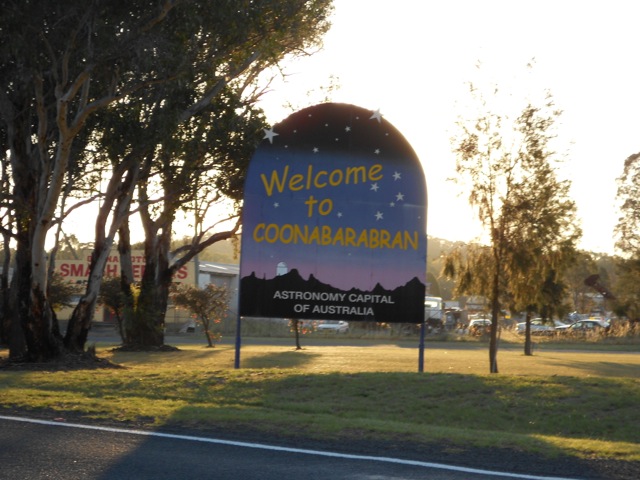 One thing to know about small towns, the coffee is generally crap! Some coffee is better than no coffee though, so I put up with it. I headed off along the Oxley Highway towards Gilgandra and then back onto the Newel Hwy to Dubbo.

Today the weather had cleared and became warmer, plus the wind picked up. The thing about driving in a vehicle shaped like a brick is it gets blown around by the wind. And when you are screaming along at 110km/h and a road train goes past the other way, you have to hang onto the wheel to keep it steady. Don’t forget the constant fields of wheat. 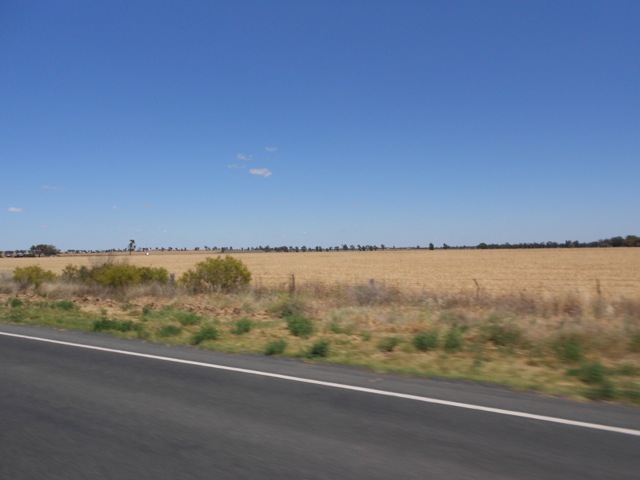 Dubbo is a pleasant large town in Mid-NSW although its coffee is crap too. Not long out of Dubbo I came across a sign that told me I was entering Bland Shire. It wasn’t kidding, between Dubbo and West Wyalong there’s not much to see: wheat fields and road trains. I travelled through Peak Hill, Parkes, Forbes and kept myself busy on the way to West Wyalong listening to an audiobook by Robert Rankin.

Beyond West Wyalong, the next sign announced I was entering The Outback, NSW. From there the landscape changed dramatically. It became wild and desolate. Hardy plants grew, but not much else in this wasteland.

With it, the heat increased and as I shot across country in the Pointy Brick the air rushing past my window was hot. I continued nervously, watching my temperature gauge and it did increase, but not too much.

I arrived in Hay, mid afternoon and quickly located the Caravan Park, cooked myself a pork yellow curry before setting myself up for the night.

I set out early the following morning in hope of avoiding the heat, but the heat got up before I did. I headed across the barren Hay Plains along the Stuart Highway. The heat was high and the wind hot as I charged across the land. The temperature gauge sat warmer than usual, but still below half – I’d checked the water levels before leaving and all was good.

Past Balranald, the massive wheat fields appeared again. To the north beyond the horizon was Mungo National Park with its twin peaks, shame I would have liked to have seen it. Oh how I longed to see mountains. I filled up at Euston and continued along the Victorian border to the beautiful city of Mildura after crossing the Murray River. 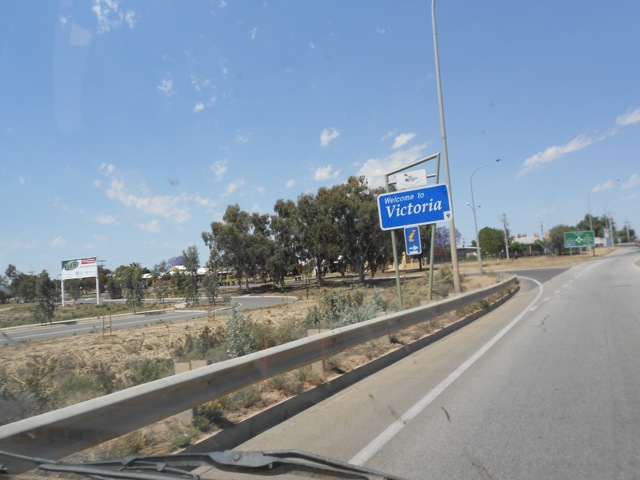 Coming in to Mildura there is plenty of colour in the trees and the surrounds, no doubt because of the river.

I stopped for lunch in Mildura and found an amazing pastry shop. Then I was off again, across the Victorian countryside. The land to the south of the Murray river was still warm and had large crops of Lavender but was otherwise more of the same. The temperature gauge held steady and after an hour, I reached the South Australian border and was stopped at Quarantine where they looked through my food – of which I had little – but still confiscated my small bag of potatoes. You can’t bring fruity items into SA. I didn’t think my spuds would count, but they did. 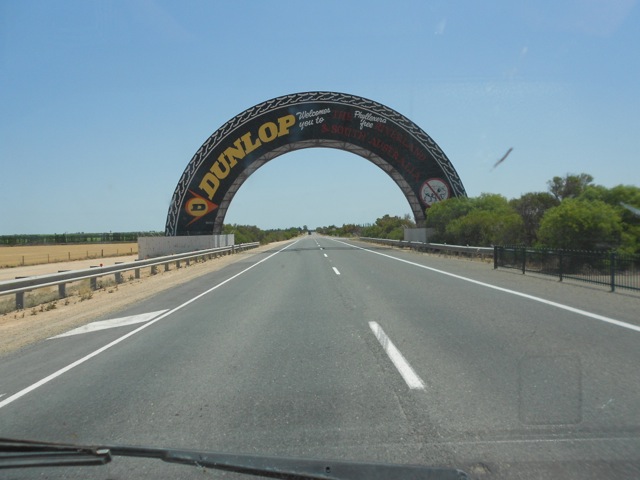 When you enter Renwick, just over the border, you know you’ve arrived in wine country. With the Murray River going through it, there are massive vineyards everywhere. The road wends its way through the lush green land. It becomes cooler too, with a cool wind refreshingly going past.

The last couple of hundred km into Adelaide passed quickly in an obviously more fertile area. I was pleased when the hills of Adelaide appeared on the horizon, something not flat! There was a couple of interesting trees that I wish I’d had my camera ready for. The Shoe Tree with about 30 pairs of shoes hanging from it. Then about a kilometre further on was the Bra Tree. There must have been more than a dozen bras of different colours handing from the branches…

In Adelaide, Apple Maps sent me on a tiki tour of the central city – stupid Apple maps, bring back Google maps! – and I eventually arrived at my friends’ house. Overall, the Pointy Brick and I arrived safely with no issues. A good beginning to the adventure.

Next, after a couple of days in Adelaide, I’m walking the Yurebilla Trail, three days in the Adelaide Hills.