Puerto Montt is a large port city in the Lakes District of northern Patagonia, in Chile.  It’s also the northern port for the Navimag Ferry, on which I arrived in the city.

Puerto Montt is large and bustling compared to Patagonia and stretches around the top of the harbour. On a clear day, rising above the city to the north is Volcán Osorno, but as it’s late autumn, clear days are rare. Here’s what I would’ve seen at a different time, thanks to the magic of Wikipedia: 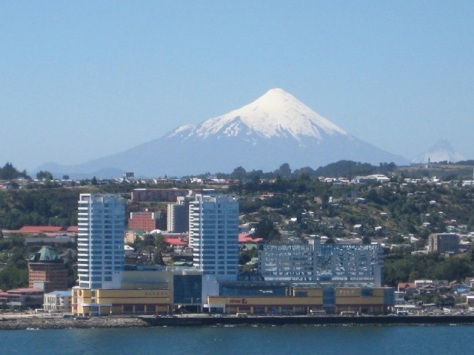 I arrived at the ferry terminal and collected my bags before heading up the hill towards the hospedaje. A hospedaje (pronounced: os-pe-da-hey) is someone’s home that’s been converted into a hostel or Bed & Breakfast. They have a more homely feel, but being run by local families, they can struggle as much with english as I do with spanish. On this occasion, we got by with a mix of both. This was also the first double bed I’d slept in for some time, so it felt divine.

I was only in Puerto Montt for a couple of days, so I only explored the city centre. Ten minutes from the hospedaje is the main road and after spending so much time in small towns, small cities or at sea, I was a little unnerved by the sheer number of people crowding the street. In fairness, it was market day and the footpaths were filled with street vendors and local shoppers. Civilisation can be intense when you’ve been away from it for so long.  In comparison, Patagonia was very quiet.

This above only shows the beginning of it. I walked through the masses and eventually, near the other end of the long main road, I found the first western fast food restaurants I’d seen in South America: McDonalds and KFC, of course! After months of cooking in hostels or eating local cuisine, I couldn’t resist but found that KFC doesn’t have that same KFC taste in Chile. At the very end of the main road I found a large shopping mall, another symbol of my return to civilisation.

…and from the same spot, taken of the harbour…

While I didn’t do a lot of exploring, here are a few things you can do out of Puerto Montt:

After my couple of days, I caught a bus north to the city of Osorno.