Surabaya is known as the City of Heroes for the part it played in the war of independence against the Dutch Empire. It’s also the country’s second largest city.

Surabaya isn’t a city that has embraced tourism to any great extent and because of this it doesn’t attract many travellers. This didn’t stop us from spending a couple of days checking out the attractions it does have.

Surabaya is a major shopping destination for Indonesians with many Western style shopping malls in the central city. But just outside this area the city changes to more squalid conditions where the poor try to eke out a living.

Strangers in a Strange Land
As we walked around the city we garnered much interest from the locals, who would often stare at the two tall, bearded, foreign lads. Many times we’d hear, ‘Hello Mister’, followed by giggles, as if this was somehow funny because it was the only words in English they knew. Then unexpectedly, at another time, a local would strike up a random conversation in fairly fluent english.

For two days we felt like the only Westerners in the city until returning to the hostel we discovered a young Italian guy had moved into our room. He joined our troupe and began travelling with us.

The Bemo
While there are plentiful taxis in the city, we discovered a very cheap form of transportation known as the Bemo. A Bemo is simply of minivan converted into a taxi-bus that travels along a predetermined route through the city. Simply wave at it to stop, tell the driver where you want to go and get in the back. When you’re at your destination the driver will let you know or press the button to get him to stop.

The cost of the trip is 4,000 Rupiah (40 cents) no matter how far you go. There are more than 40 routes, each defined by a large letter emblazoned on the front, and sometimes the back, of the vehicle. There are many Bemos on each route, so if the first one is full another will come along soon after. The entire Bemo system is reminiscent of the taxi system I discovered in southern Chile, the difference being that in Chile they use cars instead of vans.

There’s one large downfall of the Bemo system, knowing where a certain lettered Bemo goes. While there’s a list of routes online at: www.angelfire.com/on/Genhome/rutebemo.htm, there’s no map. So, unless you know the areas getting lost is easy. Having a maps app on your phone helps a lot.

The Monument is the full-sized submarine and is open for viewing most days of the year for the hefty price of Rp8,000 (80 cents). The submarine has seven rooms, although entry to some are through very low bulkhead doors. This height issue isn’t a problem for the locals, but at 189cm I had to crawl through them.

Tugu Pahlawan – Heroic Monument
Standing at 41 metres tall, the Tugu Pahlawan is a large monument commemorating the heroes of the war of independence. It is also the main symbol of Surabaya appearing on the city’s Seal, which also contains a shark ‘Sura’ and a crocodile ‘Baya’.

House of Sampoerna – Clove Cigarette Museum
While I’m morally against cigarette smoking, Surabaya contains an award-winning tourist museum devoted to the history of clove cigarette manufacturing in Indonesia. While surrounded by poor areas, the grounds of the museum could be mistaken for being in central Amsterdam.

Other Places
While there are several other places in Surabaya of interest to travellers: The Four Face Buddha; Joko Dolog, the 700 year-old statue of Buddha; or several mosques and temples, it’s not always easy to find them. Whether they are down hidden alleyways, the Bemos don’t go near them, of they just don’t stand out. Several times ended up walking at length through slums trying to find a site. Unable to ask due to the language barrier and floundering in the sticky heat, we’d eventually give up and head somewhere else. We did get lucky a couple of times and found the occasional Hindu temple. 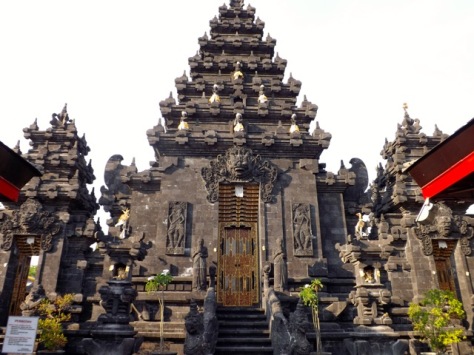 While walking through the myriad of slums, at no time did we feel unsafe.

Next, we head by train to the student capital of Indonesia, Yogyakarta.