For our final stop of in Indonesia we flew into the city of Padang in West Sumatra, a 90 minute flight from Jakarta.

Padang has only 1 million people and this small population is noticeable as soon as you arrive. The sense of being crowded that pervades Bali or the cities of Java doesn’t exist here.

Padang is a major transit point for surfers heading out to the island groups of Batu and Mentawai. Those locations are remote and beautiful but with limited power and amenities. Rainy season was just beginning as we arrived so we chose not to spend the money to visit these islands. Maybe on a return visit.

Padang has the feel of Bali without the tourists or the aggressive locals trying to sell us anything not nailed down. Padang beach is a well-known place for sunsets and has hundreds of food stalls along its length. Padang also contains many examples of Sumatran architecture, a style different to anywhere else in the country. 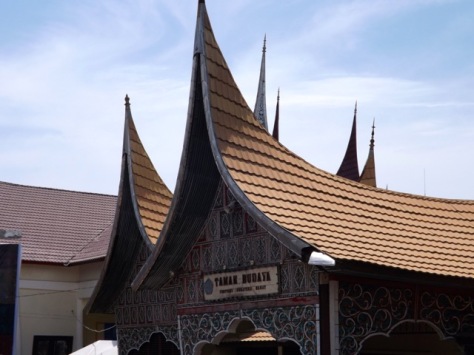 Padang Cuisine
On our first night we were introduced to a local cuisine simply called ‘Padang’ which has spread throughout Indonesia. On being seated, the table is layered with small plates of food. 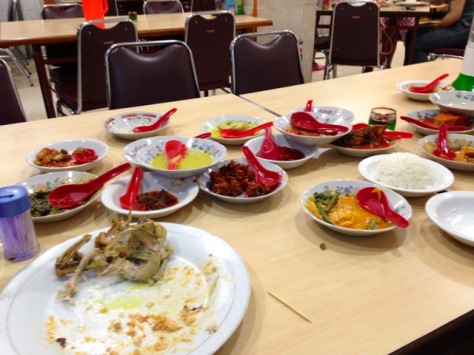 There were usually several dishes of chicken, each cooked in a different manner. The same for fish, beef and vegetables, giving the meal a smorgasbord-like feel. At the end of the meal you’re only charged for what you eat, even if it’s only half a plate. A particular favourite was the Rendang, a spicy beef dish.

Angkot Kota
Padang has this public transport system common to other Indonesian cities. But unlike those other cities, Padang does it with more with style. The vans are modern, sportier and many even have spoilers, although by definition they don’t go very fast. And because of the loud Doof Doof music, you always know when an Angkot is approaching.

Celebrities
On our first day in town we walked along the waterfront for several kilometres before circling back along one of the major roads of the city. 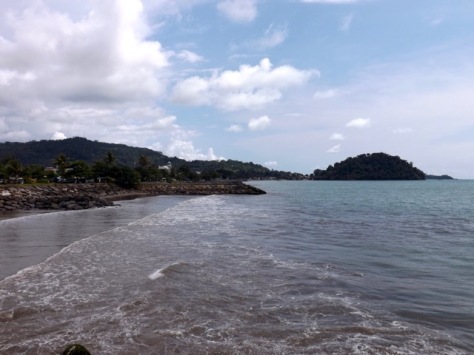 Not long after we began walking we seemed to become local celebrities. People would honk horns, mothers would bring their children out to wave at us and school kids would call ‘Hey Mister!’ while going up for a high-five. Some people tried to start conversations but between their english being little more than ‘where are you from?’ and our Indonesian no more than ‘terima kashi’ (thank you) it never went far. For the most part we just smiled, waved and continued walking.

The Twin Lakes
With scooters available for hire at the hostel, we couldn’t resist taking a pair out for a day. To make the most of our time we took a long ride across the mountains to the twin lakes, Danau Diatas and Danau Dibawah. While it’s humid in Padang, once in the mountains things cool down pretty quickly. 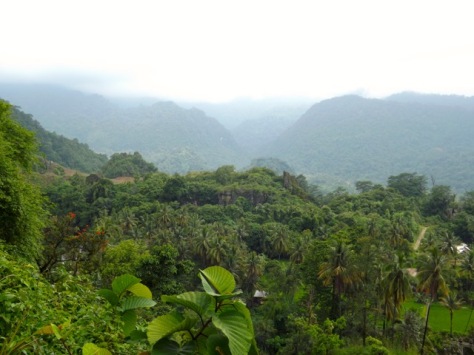 We crossed the small mountain range and as we came down the other side I discovered my front tire had a puncture. We drove into a small town, waved down a local and was surprised that he could speak English. Five minutes later we were at tyre shop where the mechanic kindly fixed the puncture for 10,000 rupiah – about AU$1.

Not long after, it began to rain. Thankfully one of the local roadside stalls sold rain ponchos. Then, after three hours we made it to the lakes. Danau Diatas… 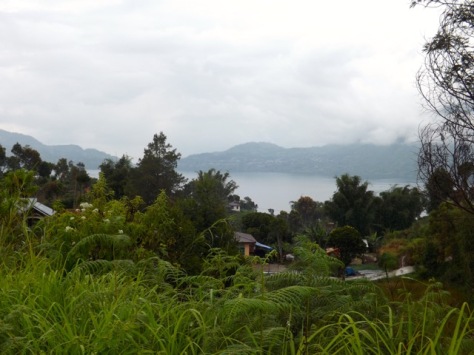 With the weather closing in quickly we spent little time at the lakes before deciding to head back. The rain got quite heavy, but this didn’t put us off as we were dry under our ponchos. While we had to be more careful on the wet roads, the journey was actually quite fun. Wipers would have come in handy on our full face helmets though.

The mountains protect Padang from the rain, so once we crossed back over the range it became drier and warmer. A most enjoyable day.

Padang Hill
In the mid afternoon of our final day in Indonesia we decided to climb Padang hill, at the end of Padang Beach.

While the hill only took ten minutes to climb, it was enough to soak us in sweat. The views of the coast line and the city were worth the effort, though.

But beyond the views, we discovered a shopkeeper and a large family of monkeys at the top of the hill. We hung out watching the shopkeeper fend off the cheeky monkeys with a long bamboo stick. This seemed to be a constant battle. As the rain began to set in for the day we headed down the hill.

After six weeks in Indonesia, it’s time to move on to a new country and more adventures. Tomorrow, Singapore.