Koh Samui is the largest of the three popular tourist islands off the east coast of Thailand, the other two being Koh Phangan and Koh Tao. These three islands plus Koh Phi Phi off the west coast make up Thailand’s main party zone.

While tourism is the primary funding source for the islands, the region’s party reputation seems to attract mainly early twenty somethings, who drink copious amounts of alcohol and do stupid things. This party reputation stems from the monthly Full Moon parties at Haad Rin, a beach at the southern tip of Koh Phangan. 40,000 youngsters invade the beach each month to indulge in a drug and alcohol fuelled party on the beach.

Our choice to stay at Koh Samui was because it has a somewhat better reputation and a slightly older tourist base. Unfortunately it still serves as a party zone during the week leading up to the Phangan Full Moon parties.

Sickness Strikes Again!
We booked three nights on Koh Samui over christmas as it’s near impossible to get bookings over New Years. After 8 hours of buses, ferries and local transport, we arrived at the hostel on the evening of Christmas Eve. We ate at a fairly popular local restaurant, but what seemed like a fairly standard pork schnitzel would see me throwing up for the better part of the night and on throughout Christmas Day.

It would seem that of the times I’ve been ill on this journey it’s been because of pork. While bacon seems fine, for the rest of the trip I’l be avoiding pork.

Scooters, of course.
With one of our two full days on the island spent in bed, I didn’t have much time to explore. To make the most of our time I hired a scooter and rode up the east coast to see what I could find. The bad weather that had plagued our Thailand visit continued, but thankfully I had a waterproof poncho, so I remained mostly dry. 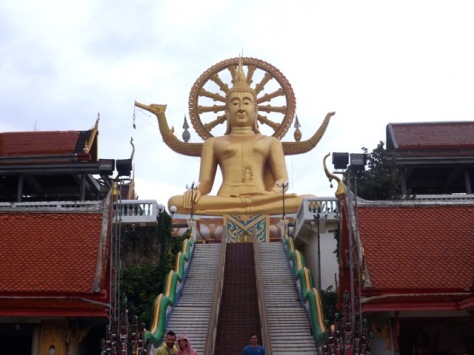 At the northern end of the island, I found a pair of temples dedicated to buddha with associated giant statues.

While the Big Buddha statues were impressive, so were the temples themselves.

Near these two temples I found an artist’s store where he builds life-sized metal statues of science fictional creatures.

As the weather began to clear up, I rode south again to find some of the other hidden gems of the island. I stopped at Lamai beach, where the sea comes right up to the front of the resorts. 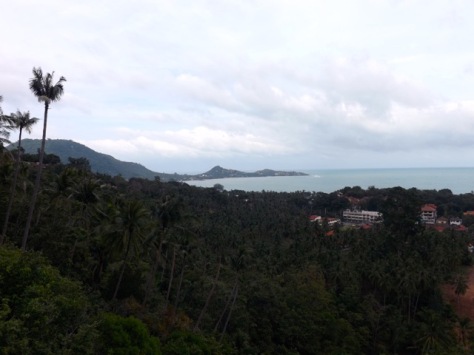 And then rode to the southern-most tip of the island where I found the Laem So Pagoda. 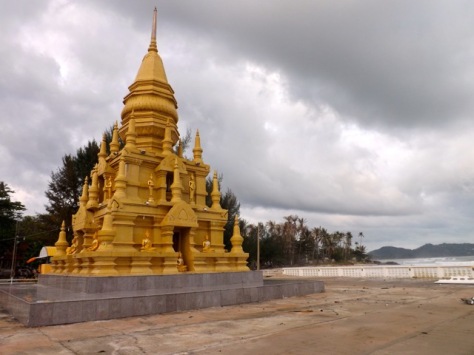 Cleaning Station
Throughout Thailand, I’ve seen ‘cleaning stations’ on the street at the front of massage places. These cleaning stations are large fish tanks containing many small fish which suck on your feet, cleaning off dead skin and drawing out toxins. I’ve been intrigued by this and have wanted to give them a try. On my day’s journey, I located a place with a full cleaning pool…

Normally the fish are fairly small, perhaps 2 centimetres long and very thin. The fish in the pool were larger, perhaps 6-8 centimetres and the sucking sensation takes some getting used to. When a dozen of them suck on one heel it’s a strange feeling. When a hundred suck on each foot at the same time, it takes an effort just to keep your feet in the water. It has to be the weirdest sensation I’ve ever felt.

Next we head back to Krabi Ao Nang, a more family friendly beach area, for New Years.