Once known as the Pearl of Asia, Phnom Penh is Cambodia’s largest city and capital. While it may once have been the loveliest French built city in Indochina, it’s now one of the dirtiest cities I’ve been to in South East Asia.

By 1975 the city had a population of between 2 and 3 million, including many refugees from Vietnam. A year later, the city was shelled relentlessly by the Khmer Rouge, killing and mutilating millions. The extremist communist regime then evacuated the city leaving it a virtual ghost town, claiming cities were havens of evil. 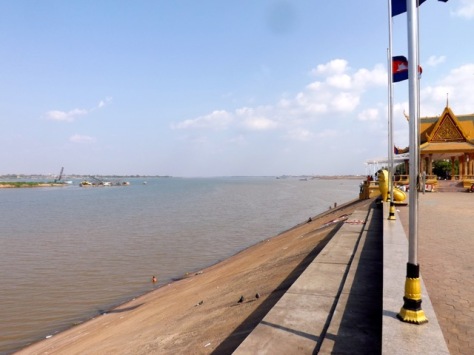 Choeung Ek – The Killing Fields
The Khmer Rouge, led by paranoid leader Pol Pot, accused Cambodians of petty crimes, tortured them until they admitted to spying then shipping them to one of 320 execution camps. 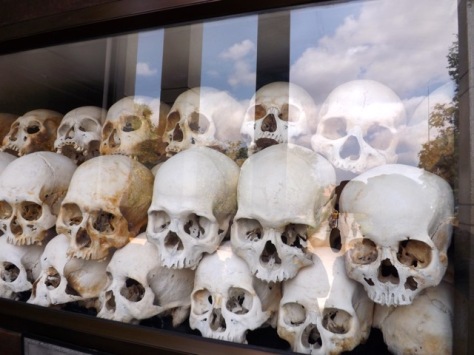 Over the course of 4 years the regime murdered nearly 3 million people in this manner before being run out by the Vietnamese army. Fifteen kilometres from Phnom Penh is the township of Choeung Ek. It is the location of the most famous of the murder camps, now simply called the Killing Fields. The site has 129 mass graves where over 20,000 people were executed.

A buddhist memorial has now been built as a way to show respect to the victims. There is also an audio tour which takes about 2 hours. I’ve never seem such sad faces as I moved around the site. 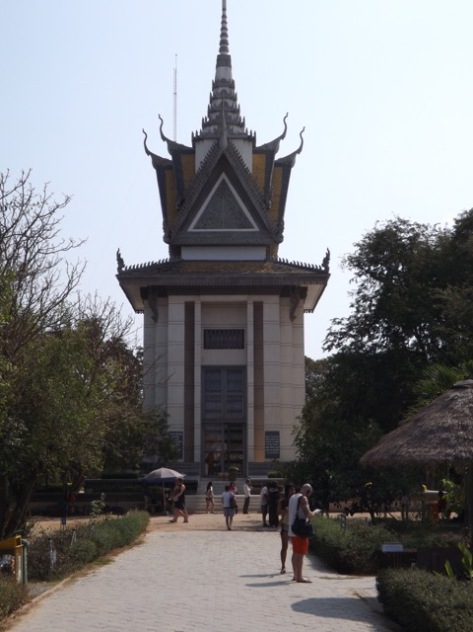 Because ammunition was expensive, executions were committed with hand weapons while music was played to mask the deaths. There’s even a tree against which children were smashed before being thrown into a pit. This was to stop them growing up and taking revenge on the Khmer Rouge.

Overall, the experience was very sobering.

Tuoi Slang Genocide Museum
During the 4 year Khmer Rouge regime, schools, temples and other institutions were considered evil and abandoned. One abandoned school in Phnom Penh was converted to a prison and torture facility.

It’s now a museum and many of the rooms have their original metal beds and photos depicting prisoners in various states of torture.

Wat Phnom
The highest religious structure in the city. Legend tells of a woman named Penh who found four buddha statues in a tree and built a shrine on this hill to protect them, thus founding the city. Phnom mean Hill and Phnom Penh literally means Penh’s Hill.

The Royal Palace
A popular tourist site, the palace has a view out across the river. The sections where the King lives is closed to the public.

Wat Preah Keo
Also known as the Silver Pagoda, it is located on the grounds of the Royal Palace. Its formal name, Preach Vihear Keo Morakot, means Temple of the Emerald-Crystal Buddha. It houses the Cambodian Emerald Buddha statue as well as a life-sized gold statue decorated with 9584 diamonds.

Independence Monument
The monument is a stupa dedicated to Cambodia’s independence from France in 1953. It’s also printed on the 100 Riel bill, a note worth about 2.5 US cents.

Next, I head to the beach for a few days of sun and sand.