In 1989 the Socialist Republic of the Union of Burma became the Union of Myanmar. At the time it was a military dictatorship until it ceded to a democratic government in 2010. It was around this time that the borders opened and travellers such as myself began flocking to a country mostly untouched by the modern western world.

Five years later and it’s a very popular travel destination with many coming to the country to see it before it becomes the next Thailand, of which it borders.

Between 1974 and 1988 Myanmar was known as one of the world’s most impoverished countries. So, when I arrived in Yangon, formerly known as Rangoon and the country’s largest city, I was surprised to find it bustling with some large rich houses, many newer looking cars and a smart phone in most people’s hands. It seems the western world will not stay locked out for long as there is evidence of a slow seepage already occuring… There’s a KFC in the city, but only one, and it’s very popular with the locals. No doubt more will follow. 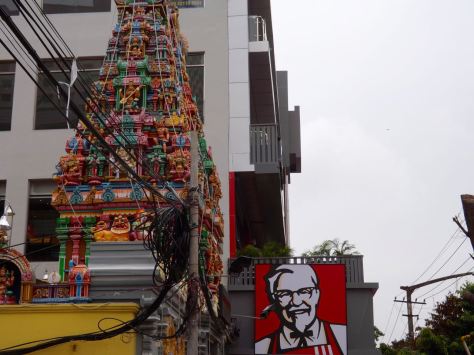 Yangon is a very busy city with just too many cars for the infrastructure, but unlike the rest of South East Asia there is not a scooter to be seen. Because everyone seems to own a car there are traffic jams everywhere and catching a taxi can be a very slow process although at their cheap fixed prices, it’s a better way to get around the city if you have the time.

Myanmar is still hanging on to its culture with fruit markets popping up everywhere as night rolls in. Most of the restaurants are what I call ‘plastic chair affairs’ – a stall set up with small plastic chairs scattered around short tables under the open sky. While mobile phones signs and satellite tv dishes are everywhere, it still feels very real and original. I’m sure this will change in time. 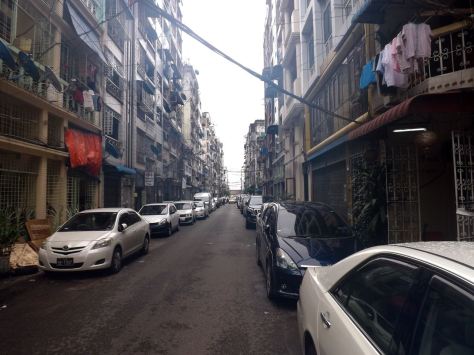 One of the more fascinating cultural elements seen in the city is the dress. Many women wear clothing usually associated with Thailand, but that is not seen often in that country these days. They come in many colours and are very pretty. Both men and women tend to wear the Longyi, a thick fabric sarong often worn over the more western long shorts.

While there is some use of western cosmetics, most women and many men use a traditional cosmetic called the Thanaka made of a bark compound applied to the cheeks and sometimes the forehead. It has several good properties including a fragrance similar to sandalwood and it is used as a sunscreen. It certainly makes everyone stand out.

This lovely young lady spoke excellent english as she harassed me to buy her postcards. I finally agreed after a bunch of haggling that included letting me take this photo.

During my visit, I got around the city to a few of the more popular tourist sites…

Shwedagon Pagoda
More than 2,500 years old, the pagoda enshrines strands of the buddha’s hair and several other holy relics. It is the most sacred buddhist pagoda in Myanmar, reaches 99 metres tall and is plated in gold leaf. At the top of the spire, an area known as the crown umbrella, there are 5448 diamonds and 2317 rubies. At the very top, a place called the diamond bud, there is a 75 carat diamond.

The Shwedagon compound contain many different pagodas, stupas, shrines and statues. It is a very popular location with many groups of people in the different halls, praying and chanting. Most of the buildings are well maintained and often very shiny, like this silver one. 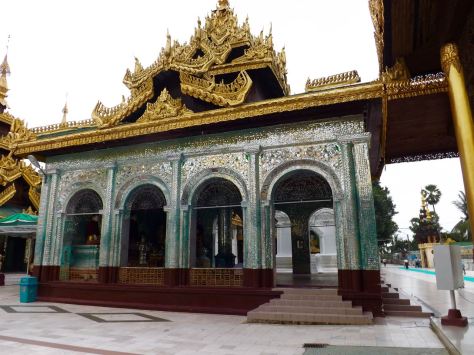 Each corner of the compound has a great Bodhi tree, the so called tree of enlightenment buddha liked to sit under. 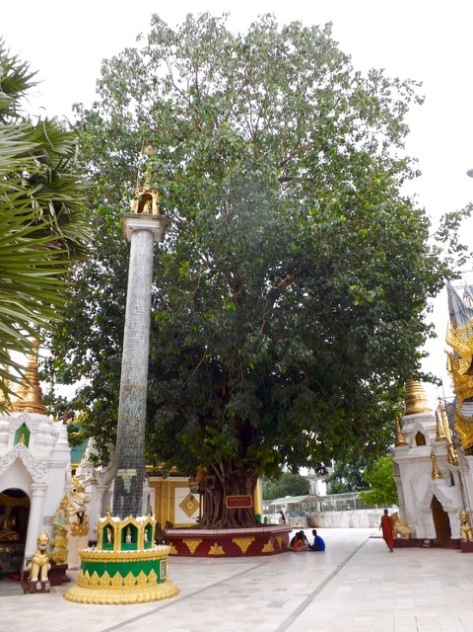 Sule Pagoda
Said to be even older than the Shwedagon Pagoda, the smaller stupa is in the centre of the city. Standing at 45 metres tall and gilded in gold it stands out on the skyline of the city. 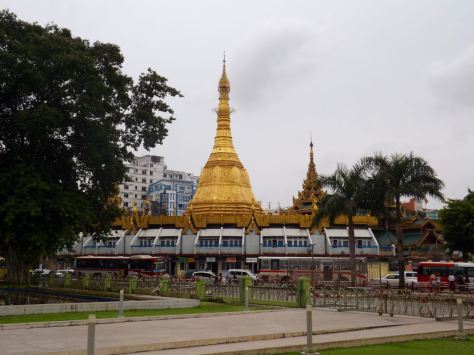 Legend tells that it was once the home of a powerful spirit called a Nat and now houses a single strand of the buddha’s hair.

Kantawgyi Gardens and Karaweik
Situated beside the Shwedagon Pagoda, the Kantawgyi gardens is a grand park area surrounding a small lake. It is a very popular place on weekends for the locals who come to enjoy the surroundings of nature in the middle of the city. There are many areas where people can hide away and just relax. It’s a beautiful place with a great view of the Shwedagon pagoda sparkling gold across the lake. 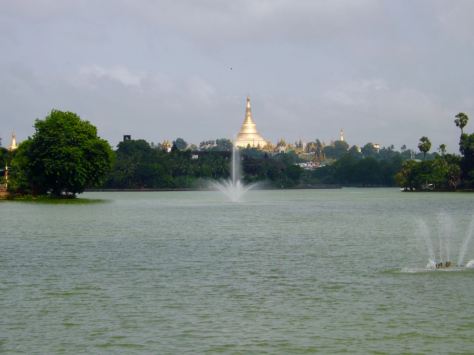 But there’s another amazing sight in the park… Once floating, but now attached to one shore is Karaweik. It was an emperor’s palace, but is now a massive restaurant for the local elite.

The site is over a century old and is even more massive than the golden reclining buddha at Wat Pho in Bangkok. 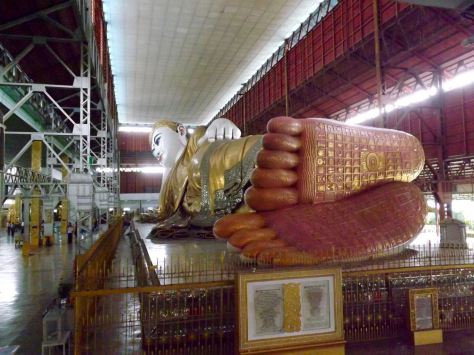 Circle Train
At the cost of only US$1 you can board the circular train and ride it in a circle around the city returning three hours later to the central train station. It takes a long time not because Yangon is that large but because the train goes very slow.

The train is a fairly popular tourist experience as it takes you out into the country side, through smaller townships and past some of the more impoverished parts of the city. The ride was interesting and while the views were similar to some I’ve seem from a train in Bangkok, it was watching the locals go about their daily business that was more interesting. There were even wandering fruit vendors carrying trays of fruit on their heads. Because the train goes so slow, it doesn’t usually stop at stations, people just get on as the train slowly moves past.

After a few days in Yangon, I headed north to one of the great wonders of Myanmar, the Bagan Plains.