After a night in a tent and a B&B style breakfast, I packed up and headed out. I had planned for today to be the longest day of this walk, so thought it best I get started early. The trail went quickly through a field to a small lane then onto a major road for a hundred metres or so before diving back onto cropland. 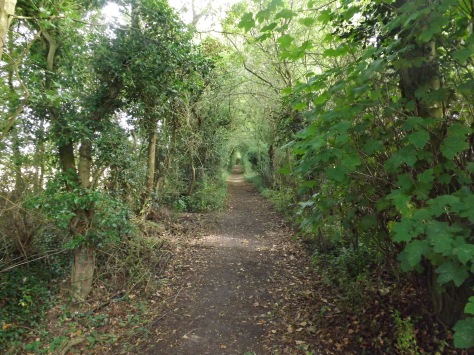 I started to see horses in paddocks as I walked and chatted to several as I went past, some coming to the fence to check me out. As I cut around a small copse of trees, I began to hear the highway ahead. I crossed another paddock and over the road where I could. I then walked between a pair of fields with horses and ponies roaming around before onto a small lane that again led to a rural road. I followed this to a small village before turning left and along for fifteen minutes to the large village of Tadburgh.

There is a pub on the far side of the township, and I was keen for a coffee, so I walked along the major road to it. It was closed. It seemed pretty standard for Norfolk not to find anywhere open that sold food. I sat on an outside seat and ate some trail mix before heading off again. 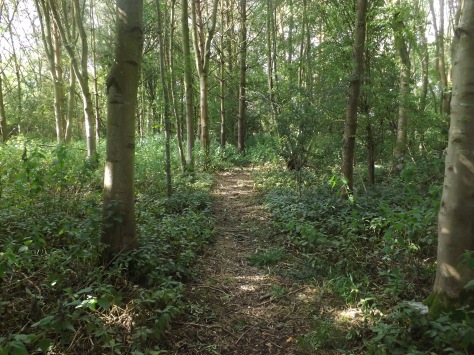 I walked on again along tight country roads for some time, standing aside for the occasional car that came by. I turned right and headed onto farmland again along permissive lands provided for my walk. I crossed more wild trails fending off nettles with my walking poles. Over a major road,  I walked into more fields, passing some trees called, ‘Devil’s Wood’ then along a path to the village of Fritton. As I walked, I wished for a seat, and when I got to the corner there was one waiting near a phone box. I sat down and ate more of my trail mix. Again, like the other villages, there was no place to stop to buy any food, not even a corner shop to grab a snack. 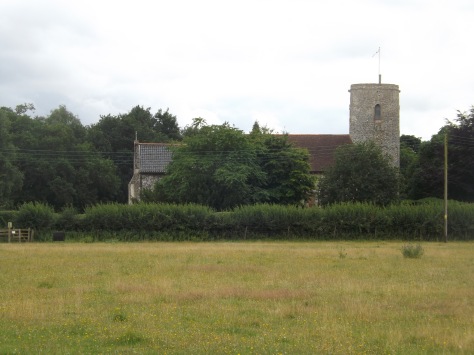 After a rest, I headed south with the threat of rain looming in the sky. It spat a little as I walked under a row of trees, but nothing more. Then it was back into farmland and across more wheat fields before heading south into Tyrell’s Wood, the first I was allowed to walk through. It seemed popular with dog walkers. When I got to the carpark, I took another rest, taking off my boots. Today my boots have been hard on my feet and ankles, and I could start to feel some strain on my Achilles’ tendons. So when I put the boots on again, I made sure to keep them loose.

Rain threatened again as I headed off again along country lanes. After ten minutes the rain finally came down. I was prepared for it and had brought a small umbrella with me. With it open, I stood under a large tree while a heavy barrage of rain came down for 30 minutes or so.

When it stopped, I headed off again and five minutes later had to cross a wheat field with a path cut through it. It was a little slippery, but the wet dirt had yet to turn to mud although my boots and legs got wet from the wet plants. 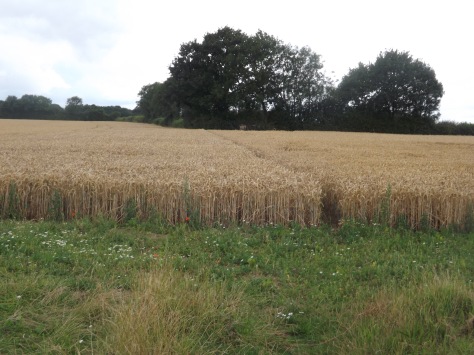 I eventually made it to Pulham Market, a larger village with a pair of pubs close together. But time was getting on, and I estimated I still had another 2 hours to walk, so I didn’t want to stop for too long. I had no idea how far I had walked since leaving camp nearly 8 hours earlier, but my legs were growing sore and seized up each time I stopped. So I pushed on. My left Achilles tendon was still sore, so I tried to go easy on it, adjusting my boots again to give some comfort. 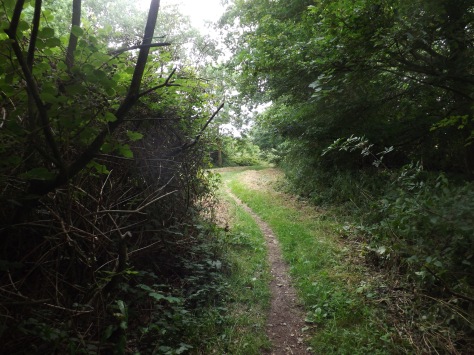 I pushed on south along the road and then a country road that led onto more fields. I again cut across wheat fields and along grass verges hiding nettles until I reached another major highway. It was here I was to leave the trail to get to my accommodation another 5 miles away.

I walked through more country lanes, past houses and farms, through the village of Tivetshall St Mary to the remains of St Mary’s Church where I stopped for my final rest. I was just about to leave again when it again began to pour. 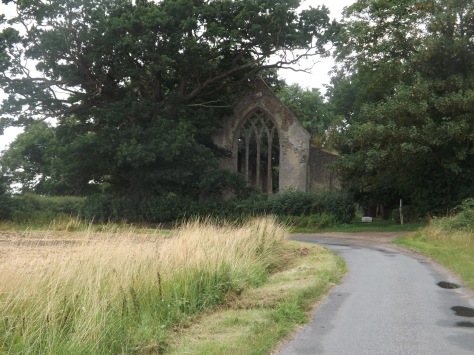 Once it had finished, I set off but was again stiff. I crossed a railway bridge then followed a muddy trail across yet another wheat field and a grass paddock. One more road and I arrived at my B&B. My legs were sore, and I was knackered after a 10 and half hour day, nine of them walking. I looked forward to a shower and a walk to the pub for dinner.

After my shower, I could barely walk. Then because a local fete had been on that day, I discovered the pub was not serving food and delivery from Diss was going to cost me a fortune, so I resigned myself to eating trail mix again. But again, my host offered to cook me dinner. It was amazing. Afterwards, I watched some TV before collapsing into a comfortable bed.

Rain rain rain, all night long. It would be a short walk today to my end point where I was catching a train late in the day. My hosts told me I could stay as long as I liked, and I made a plan for when the rain stopped.

My host dropped me off back on the trail, and I waited in a pub for the rain to stop, but alas, it did not. The pub did not serve food on Mondays but could heat up a sausage roll for me. I eventually gave up waiting for the rain to stop and caught a bus to the train station in Diss where I hung out for several hours waiting for the train. Not the way I wanted to end the walk, but neither would be getting rained on and having to cross muddy fields. 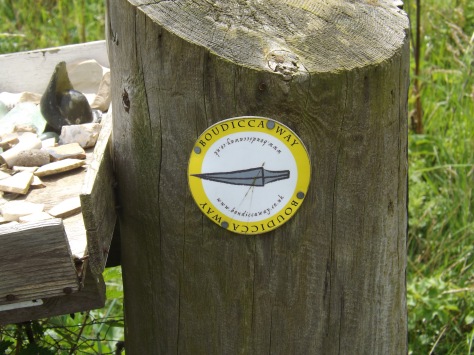 Overall
Honestly, while it was an interesting walk along roads and through paths across farms, there was not that much to the Boudicca Way. It was good exercise and got me used to a heavy pack again, but there were very few scenic views or places of interest. The difficulty finding accommodations and there being practically nowhere to eat made it a rather annoying trip. I’m glad I walked on this side of the country, but next, I will be off on what I hope will be a more decent hike, Cheshire’s Sandstone Trail.