About a hundred miles to the North East of London is Norwich, which until the 18th century was the second-largest city in England. The town was founded in about the 6th century as Northwic (North Farm) and over time has become Norwich, with a silent ‘w’.

In its early years, Norwich was a bustling trade centre even while being raided and burnt in 1004 by the Viking king of Denmark. Wool was Norwich’s primary trade good, which was said to have made England rich and funded many churches in the region. Norwich has more medieval churches than any other city in Western Europe north of the Alps.

So, taking a couple of days off, I caught the train out of London and, after dropping my bag at my hotel, set about exploring the city.

Skirting north along the River Wensum, I discovered the Cow Tower nestled on one of its bends. The late 12th-century artillery tower was built to defend the northeastern approach to the city from the local English rebels and the French. The weapons of choice on the defensive building were hand cannons and bombards.

Continuing along the river, I found two different sections of the seven-metre wall that once surrounded the city. Norwich had twelve such fortified gates and boasted the longest system of urban defences in Britain. I did find other scattered bits throughout the city. An artist’s impression can be found here.

As I walked towards the centre of the city, I discovered a two-metre tall, brightly painted T. rex on the side of the road. Littered throughout the city are 21 of these sculptures, of which I may have found about 10. They are part of the GoGo Art Trail in Norwich, which has included hares and dragons in previous years, with woolly mammoths next year.

Just north of the city centre is a historical cobbled lane that dates back to the Tudor period between 1485 and 1603. The lane’s name is from several Elm trees that once grew in the square at the top of the road. Due to Dutch Elm Disease, the tree in Elm Hill is no longer an Elm tree. 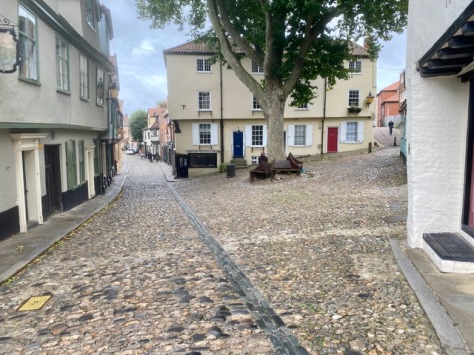 At the bottom of Elm Hill lane is Tombland, the location of an ancient Anglo-Saxon marketplace. While today it is a popular restaurant area, it also houses a pair of old gates into the courtyard of the Norwich Cathedral.

The cathedral is one of the most complete Norman Cathedrals in England. Some parts were sectioned off for an exhibition called Dippy on tour, the cast bones of a Diplodocus dinosaur. The display had closed by the time I popped by, but a choir was practising at the other end. While we couldn’t take photos of the choir, the cathedral’s acoustics gave their voices an awe-inspiring sound.

The castle at the centre of Norwich is perhaps the most untypical looking castle I’ve seen in my travels with its distinct cubic shape. (Although during my trip to Nottingham the next week, I found another just like it). Its construction was ordered by William the Conquerer late in the tenth century. The castle was used as a prison from 1220 to 1887 before being converted to a Museum. Unfortunately, during my visit to the city, the castle had some of the original medieval floors and rooms being reconstructed, and I couldn’t visit the site. 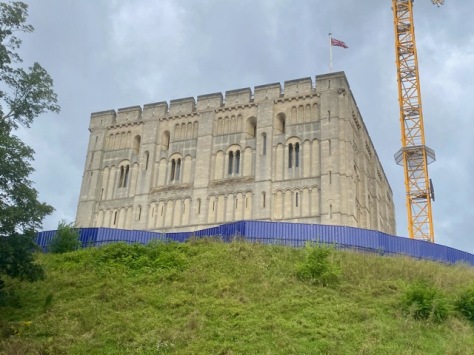 Also known as the Secret Garden, the Plantation Garden was established more than a hundred years ago in an abandoned chalk quarry beside the Roman Catholic Cathedral. The garden is a spot of serenity in the city includes a huge gothic fountain, a 10-metre long Victorian-style greenhouse and a medieval terrace wall. 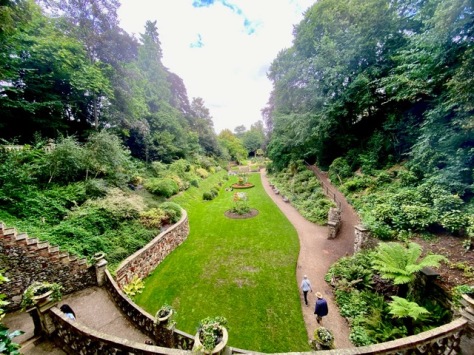 Not far from the centre of the city is a large restored Victorian roller skating rink with a dramatic arched wooden roof. It originally opened in 1876 but barely lasted a year. Over the years, it has been a Vaudeville Theatre, an American tinned meat sales building, a Salvation Army citadel and a builder’s merchant. In 1993 it was bought for the South Asia Collection and converted to an art gallery and shop. Unsurprisingly, it now holds an extensive collection of art from Southern Asia. 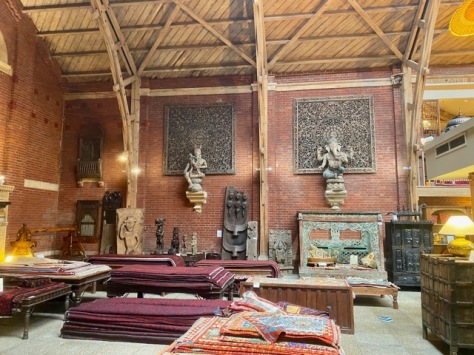 The Museum of Norwich at Bridewell

Hidden away in a small building near the central city, the museum tells the story of Norwich’s industries and the people who lived and worked there. The period stretches from medieval to modern and shows how the city adapted to changing fortunes through the textile trade, shoes, chocolate, and mustard production.

I was surprised to find a city of art, numerous gaming stores and many many churches, along with quaint old Victorian lanes and plentiful history. It was a nice place to explore for a couple of days.