Today I arranged for my hiking group to join me to climb Mt Greville. Mt Greville is across the lake from Mt Edwards and has a harsh looking rocky side. 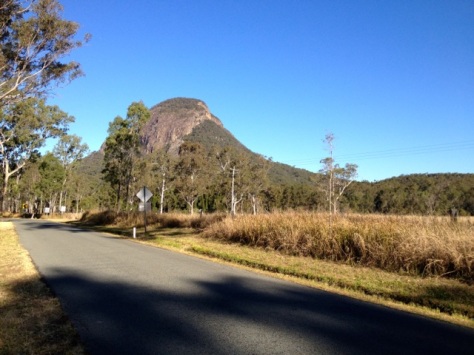 The mountain is also known as kangaroo mountain, as from certain angles it looks like a grazing kangaroo. 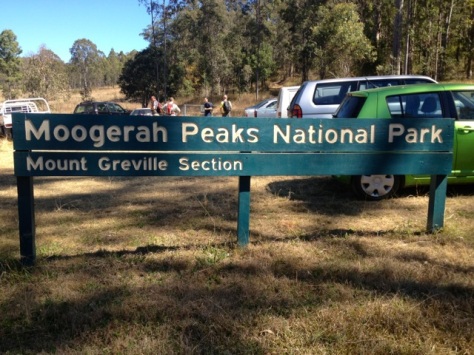 For my last group hike I ended up with nearly 45 walkers.  With Mt Greville being a more difficult climb, I decided to limit the numbers. This time 16 people registered and of those, 13 arrived at the usual meeting place in Aratula, where we drove as a convoy to the car park.

The initial part of the walk is a vehicle track heading across the grass at the base of the mountain. The vehicle track quickly turns into a rocky trail and cuts up a gently slope to a sign pointing us towards Palm Gorge. This would be the last sign we would see today. From here the track gets very rocky and steep. Thankfully most of us are in hiking boots. 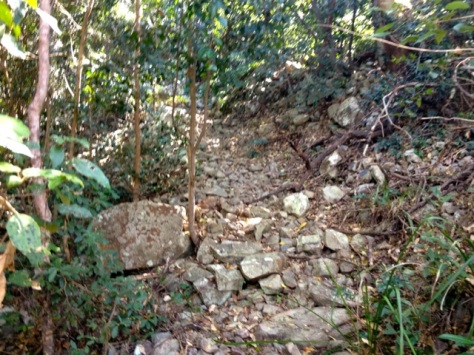 The slope intensifies and we begin to see a stone cliff wall ahead that looks to block our progress.  As we approach the wall, we notice a small channel of rock to the right leading to a rocky gorge.

There are trees dotted around and dead palm fronds everywhere. We pick our way up through the gorge which at times is barely two metres across.

There was a deep sense of beauty during our climb and a sense of being small. Before we even reached the top, this gorge helped to make Mt Greville one of my favourite hikes in South East Queensland.

We emerged from the gorge covered in sweat and rested for a few minutes to let the stragglers catch up. 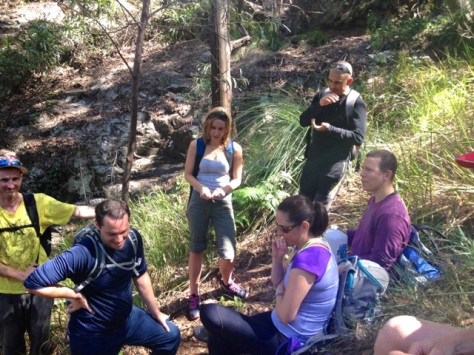 When we set off again it felt like we were somewhere else. The rocky gorge gave way to a tree-lined dirt trail with grass along either side.  We could see the top of the mountain vaguely through the tree canopy to the north. The climb continued more steeply and we quickly arrived at a lookout giving views across to the ramparts of the Main Range.

As we neared to summit, Grass Trees began to appear as they tend to do near the top of most peaks in this region. We pushed on and before we knew it we arrived at the large cairn at the top, where we shed out bags and rested. 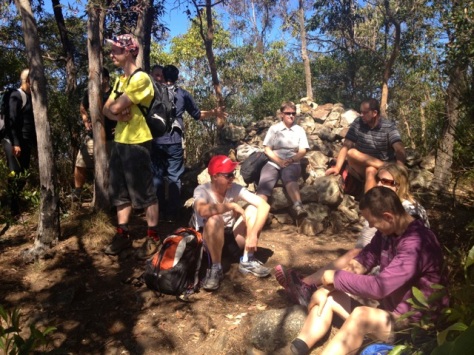 The views from the top were minimal, hidden behind the trees, but a couple of short tracks lead down to viewing points on either side. To the north, I got down to a rock slab that gave me good views along the Main Range and Mt Edwards beside Moogerah Lake.

Along the short southern track I was awarded with views over the mountains to the south, including Mt Barney in the distance – the site of my next walk with the group.

On the way down, we retraced out steps to the top of the Palm Gorge but took an alternate route. The South East track leads through some dense bush and open rocky slopes. It can be a little confusing going down, but with plenty of eyes, we easily spotted the trail of cairns and orange arrows. This slope proved more picturesque and allowed for a view to the south, west and occasionally to the north.

We stopped here and there to look down a gorge or from the top of a cliff. The slope was sometimes steep, but you gotta love the grip of quality hiking boots. We soon dropped back into the forest and followed an easier track until we came to the previously mentioned sign. From there it was fairly flat and easy-going back to the car.

Mt Greville was a most enjoyable climb with a great group of people. I highly recommend this climb to anyone who is fit enough to climb it.

Afterwards the group stopped in to the Aratula Hotel for the obligatory post hike beer.

Next week, a bit of a rest and a couple of minor walks in D’Aguilar National Park.