Today is slated as the hardest on the entire circuit as we’re climbing over the windblown Paso John Gardner, more than 1350m. This is one of the main attractions of walking the back side of park.

As Campamento Los Perros is hidden away in the forest, I couldn’t tell what the weather was doing when I woke. But, it was just before I’d finished breakfast that I discovered I was the only person left in camp. It would seem that everyone else had decided to get an early start. So, I packed up quickly and headed out.

The trail heads straight up a hill for some time, through the forest and a rather large patch of mud. I continued following the trail, stepping over mud and the occasional fallen tree as I worked my way slowly up the pass. In the forest I could hear gusts of wind above me in the trees. After an hour I came to the end of the trees and out into rocks. The wind was now gusting over me heavily as I moved and I was forced to lean down into the stones to stop from being blown off my feet. You can hear the large gusts coming, so when a large one has passed, I rushed along the rocky path to the next set of trees. Yet while I was sheltered from the wind I was again subject to the mud. 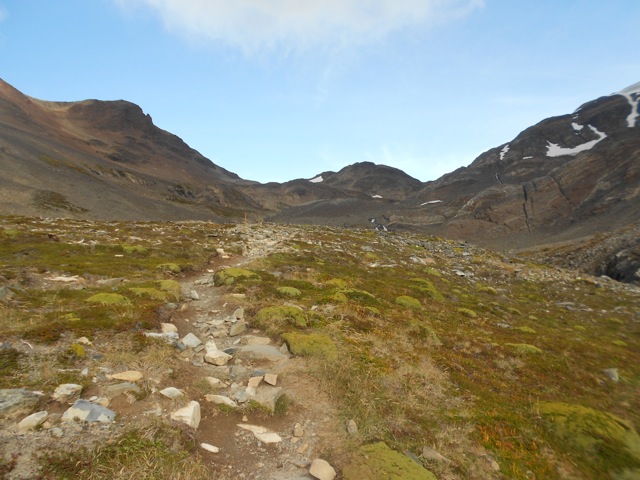 Then I’m out into the rocks again and again am being blasted by the wind gusts. It’s a quick march across the rocks, stooping low for the heavier gusts which are picking up small stones and blasting them against my arms and back of my head. I raced down towards the river along the trail and around the final patch of trees and my last protection from the wind. I then marched up the trail as quickly as the stones and wind would allow, ducking and setting my feet and poles to stop from being blown around too severely.

The views back down the valley where I had come are pretty with the red of the trees and the flowing river. 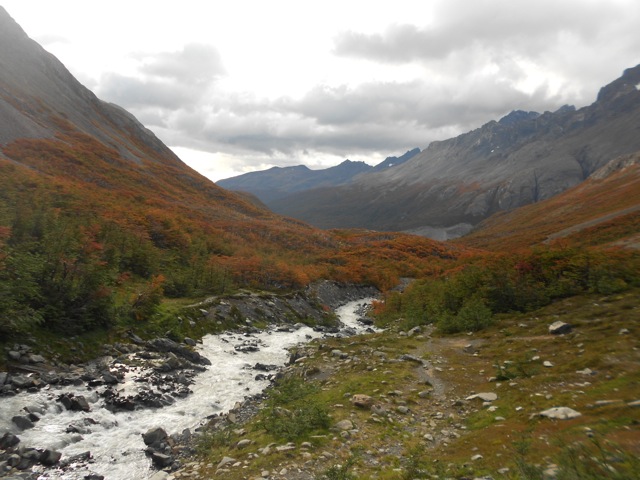 I pushed on up the pass as it began to get steeper but no less ragged with the wind. At one stage I was lifted from my feet and landed 2 metres back, skidding in the rocks. While this could be scary there was a real sense of exhilaration of constantly fighting the wind. Further up the pass I could see the wind whipping water from various streams into mist and I could hear the wind whistling madly through the snowy mountain tops. I pushed on, climbing a steeper area, resting briefly close to a glacier until the wind chilled me enough to push me further on. 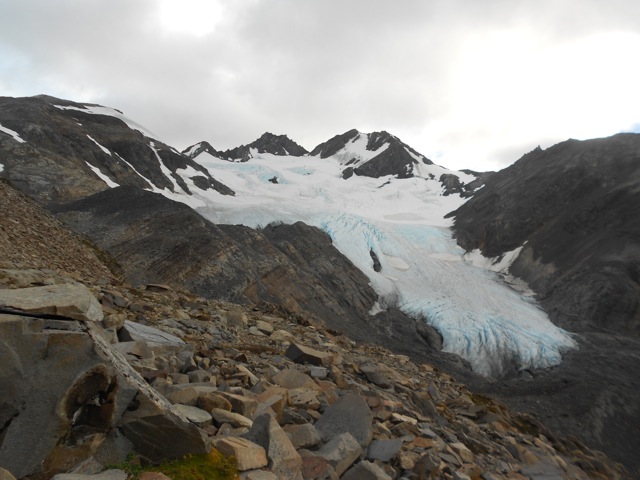 Finally, about 200 metres from the top of the Paso, I came over a ridge and the trail flattened out. It was then a short walk through a windy gully to reach the cairns at the top of the paso. The wind was howling past me when I came over the top and light rain was being propelled full force at me. After 7 beautiful days, it would be typical that on this the hardest day of the hike, the weather would change to make it even harder.

At the top of the pass, you look down on top of Glacier Grey, but to get a better view, you walk down about fifty metres through the icy winds to closer to the edge of the ridge. It’s not the greatest atmosphere to take photos, but I did what I could in the wind and rain. 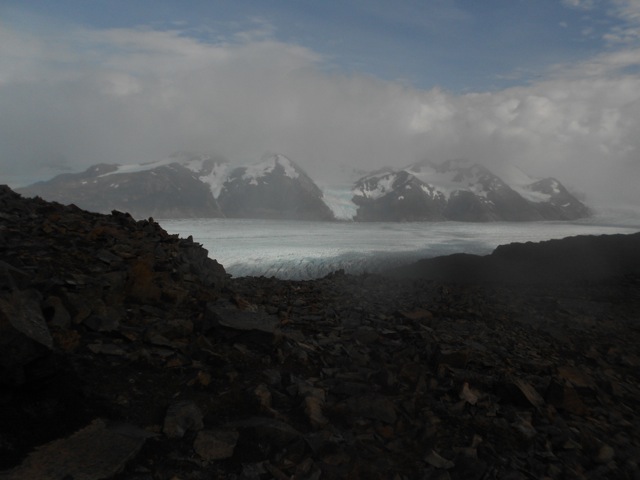 I had to stop and put on my jacket, more to break the icy wind coming at me than to avoid the rain. Putting on a jacket in these high winds is challenging, to say the least. I made it to the edge of the ridge and looked down on Glacier Grey. I’ve seen plenty of glaciers, but not from directly above and Glacier Grey is a mighty specimen, stretching 6km across the valley to the icy snow covered mountains on the far side, very much like Antarctica. The glacier is said to be more than 100km long, but this finger of ice disappeared around the mountain in the distance. 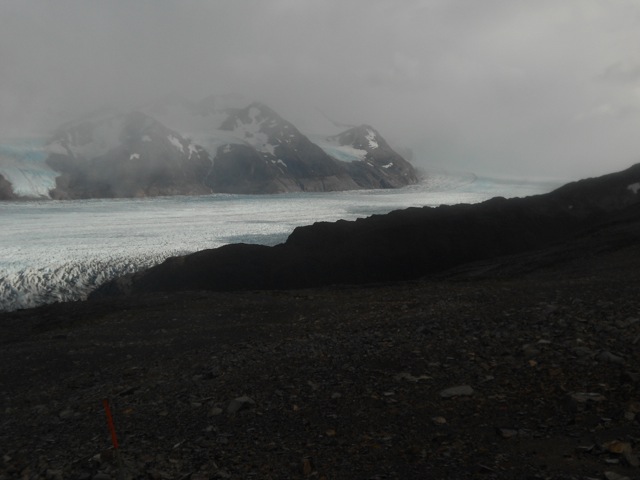 This small piece of ice – yes small – is a part of the southern Patagonian Ice Field, one of the three largest fields of ice in the world.

The trail heads down steeply on a slate and scree slope, weaving on a defined path, then follows the glacier, a kilometre below, to where it forks at Lago Grey. 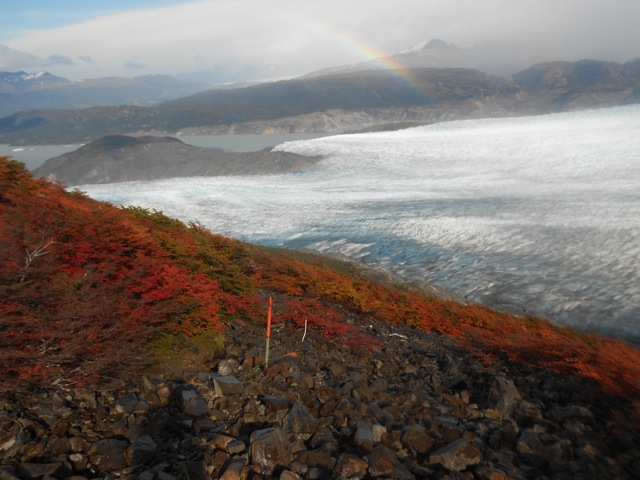 At a certain point the trail leads into the trees that have turned fiery autumn red, and finally there is some respite from the wind. The trail begins its slow downward heading, with plentiful steps. 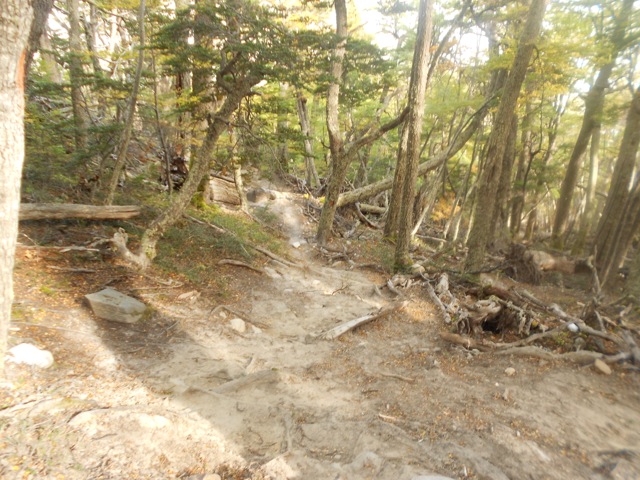 After several hundred metres, it finally ends at Campamento Paso. Going down in no wind is still harder than going up in lots of wind. I was planning to stay here tonight, but when I discovered the Pass had only taken just over 4 and a half hours, I decided to head on the extra 4 hours to Refugio Lago Grey with the hope of finishing the hike tomorrow.

After a 5 minute break, I pushed on. Half an hour into the walk, the rain became heavy and the wind continued. There was a hand drawn map in the shelter at Campamento Paso that showed the trail heading steadily downhill to the Refugio, but it wasn’t like that at all, in fact, much of the first half was going up. At many times there were good vies of the glacier as you walked. 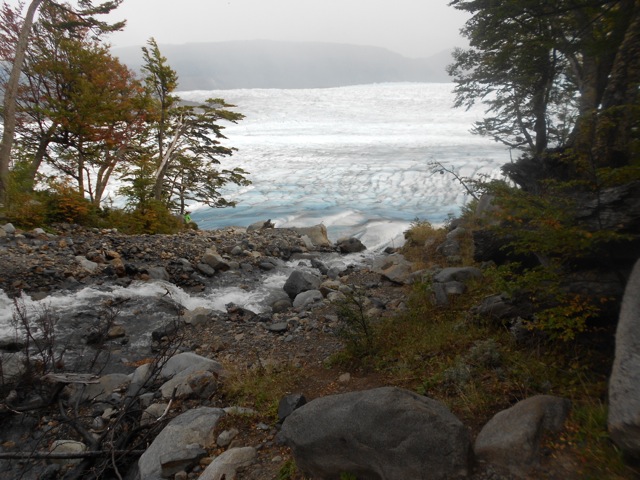 There are a couple of gullies on the walk that are too steep to climb. The park rangers have set up steel ladders to help walkers. 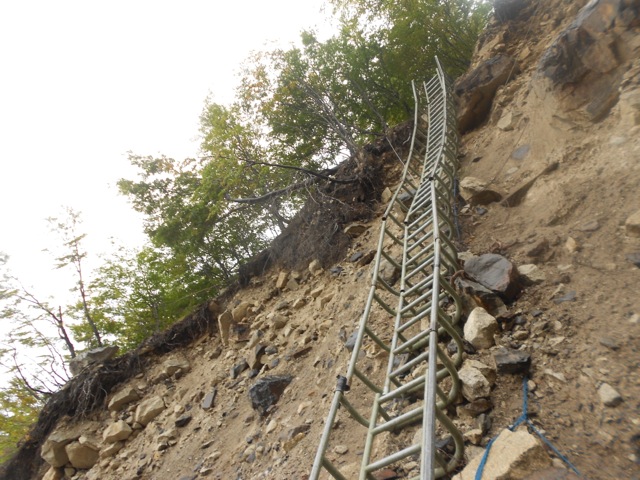 Just after the first of the ladders, the trail leads around the top of a cliff line. There is only a foot wide path with nothing to hang on to, wind dragging at you and a fall of half a kilometre to a glacier. It was perhaps one of the more frightening experiences of my life, as I literally crawl along this path hanging onto large rocks. Twice I actually lay in a gap waiting for the wind to die down so I could continue. Apparently, the next morning, some of this very cliff line slipped away and the walkers behind me were stuck, so it was lucky I decided to walk on when I did.

The trail continued but most of it was inside the forested area and I was pleased not to be exposed more on this particular day. I climbed another of the steel ladders, crossed a long wire bridge and climbed down several quiet forest gullies. There was a mirador along the way, right above the end of the glacier. I stayed briefly to watch, but after 8 hours walking and the cold, I didn’t stay long. Murphy’s Law, however… nothing happened while I was watching, but as I walked away… a large section of ice calved from the glacier into the lake. 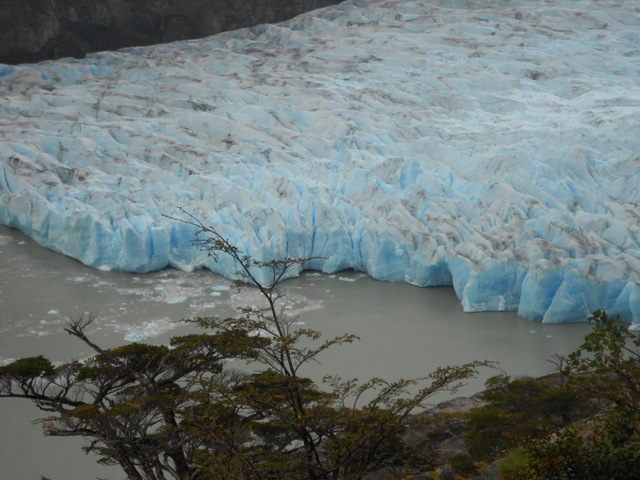 The last hour of the day was spent staggering through the trees until I finally arrived at the Refugio. That night as I cooked in the refugio’s common cooking area, I gave advice to new hikers on the trail who had started the hike that day.