Situated just over 20km south of Pucón is the Villarrica National Park and its most prominent feature, the three volcanos that cross the Andes. The main cone of the three is the smoking Volcán Villarrica with the others being Quetrupillán and Lanín behind it when looking from Pucón. 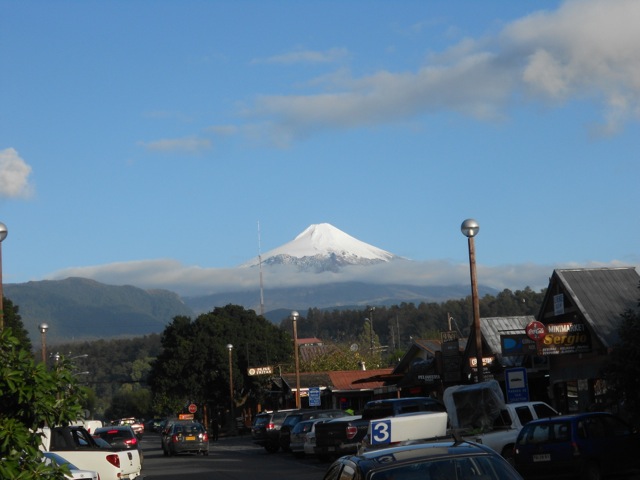 I’d originally planned to walk the Villarrica Traverse, a 6-day hike starting on one side of Volcán Villarrica and around the southern base of both Villarrica and Quetrupillán to a small town called Puesco on the other side of the National Park. But after waiting for days for the late autumn rain to clear for an extended time, I unhappily cancelled my plans. While I don’t mind walking in the rain for short periods, walking in the rain at a temperature of 2 degrees celsius is not something I really enjoy doing.

So, I decided to do the most popular and busiest attraction of the Parque Nacional, climbing to the crater of the 2,800m snowcapped top of Volcán Villarrica.

I was up at 5.30am for a 6.30am pick up. Breakfast was supplied by my hostel, who was also providing beer and a BBQ afterwards, all included in the price. We were taken to another hostel and provided with the gear for the climb. I opted for my own boots, but took everything else – including crampons and an ice ax. We were then driven along the pot holed dirt roads up the volcano to the ski resort at the base of the climb. 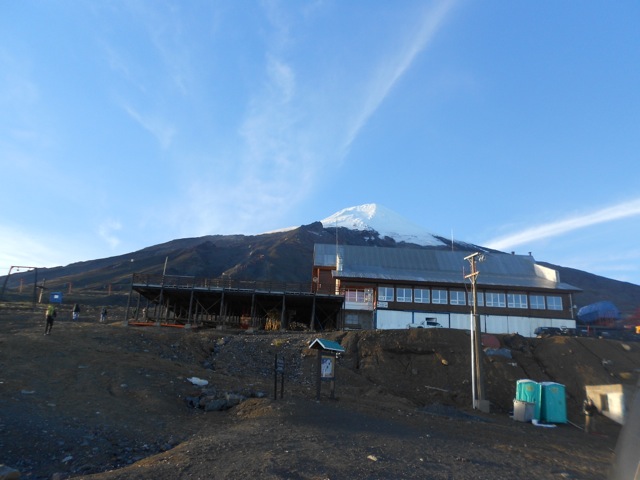 We unloaded form the bus and gathered for the talk. We’d be walking to the base of the snow cap and stopping, waiting for the guides to check the wind speed and determine if we could continue.

The climb would be in four parts, the last being the snow cap. We set off along the steep lower face of the volcano, the scree and dirt being soft and slightly difficult to climb. As we climbed, we split into groups, the younger group, the two larger American ladies, and me. There’s a reason I call myself the Lone Trail Wanderer, I like to walk alone in the serenity of nature and the quiet. The young group just yabbered away the entire climb and the less fit american girls quickly dropped back. 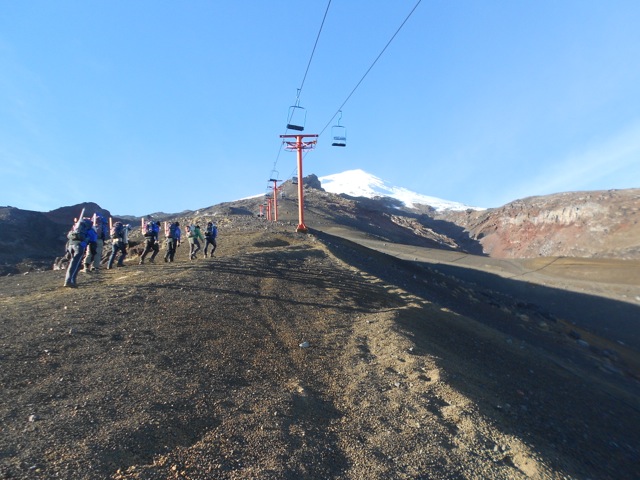 In the quiet, I climbed the steep trail, zig-zagging up the side of the mountain, and trying not to be blown over by the wind, which was gusting rather strongly, blowing dust and pebbles around me. Up ahead, I saw one of the young crowd stumble in the wind and nearly lose her footing. Looking back, the lake below could be seen, and the volcanoes to the south, while sitting below the sun, and while not making good photos, still looked amazing. 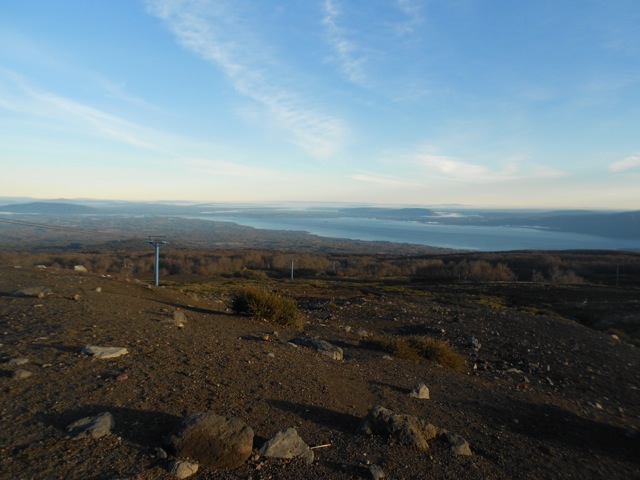 We continued walking and climbed along a gully of rocks out of the wind and took some respite before topping the ridge and heading towards the first stop, the top of a ski lift and a large wooden building, again out of the wind. We stopped for a rest and some photos before heading on. The next stop, an old burnt out ski lift building a little further up. Just before we left, the two larger girls finally arrived wondering why they had decided to climb the mountain – in words I won’t repeat here. 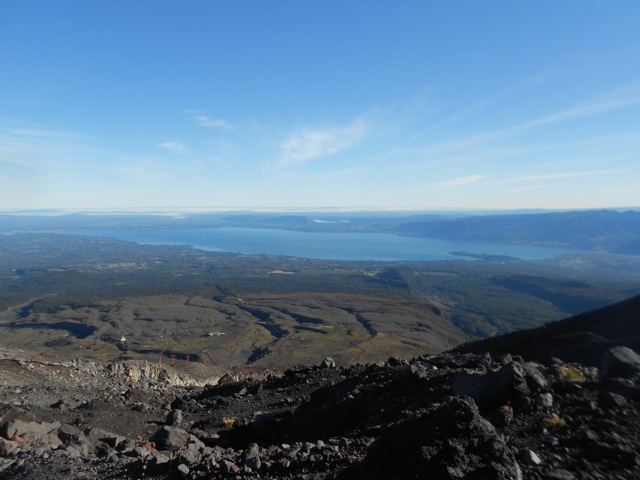 The next stage was easier and again I let myself drop back to walk in the quiet again, we walked behind a ridge for most of the way, so enjoyed the lack of wind ripping at us. We stopped at old burnt out brick lift house but didn’t go in. 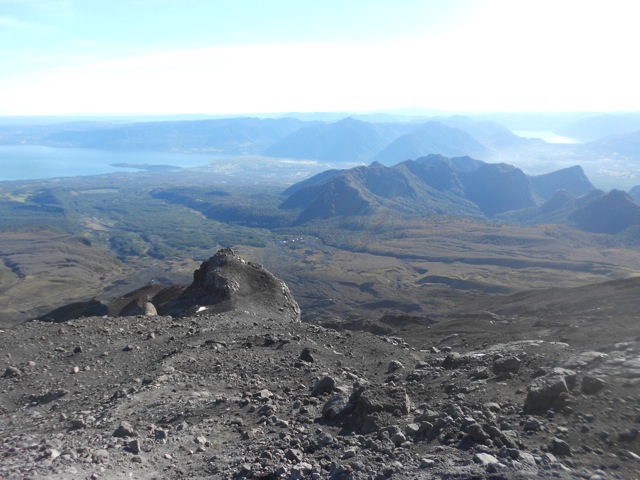 The third leg became steeper again and the volcanic sands made each step harder. I again drifted back from the ongoing and incessant chatter from the other group. There was no sight of the american girls behind us and I would later discover they hadn’t gone past the second stop. We came to the base of the snow cap and were briefed on the next stage. On went the warmer clothes, the gaiters, and out came the crampons and ice axe. The guides then climbed the ice shelf to test the wind. 10 minutes later they returned to tell us that the wind was blowing 80km/hr and it wasn’t safe to continue further. Okay, no problems, they knew what they were doing, so all good. This led to half of the group arguing with the guides for the next half an hour, trying to persuade them to take them anyway. Eventually, the guides were persuaded, but I decided it more prudent to not go. The views were amazing though, although I discovered that the lens of my camera had failed. It had been giving me grief much of my trip. Time to buy a new one… 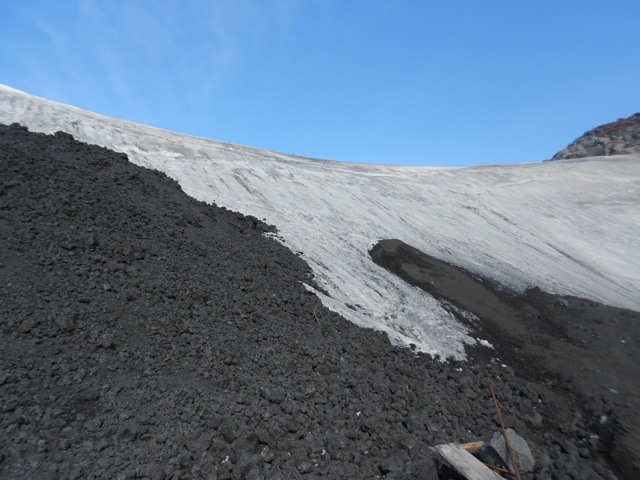 The four of us who hadn’t gone waited for 30 more minutes in the icy wind for them to return, but when they didn’t, we headed down. Down was very quick. Because of the volcanic sands, you could slide each step and when running you skidded down rather quickly. Back at the first chair lift building we collected the two American girls and continued down, arriving at the base soon after to wait for the other climbers. They arrived an hour later and we all were back in the bus and heading back to Pucón for beer and BBQ.

It was a shame we couldn’t get right to the top – even the four that tried didn’t make it because of the clouds rolling in quickly. But the weather rules supreme in Patagonia and you must bow to its might.