Leading 69km across Bolivia from La Paz to the small town of Coroico is a road called North Yungas Road. North Yungas Road has another name, Death Road, and in1995 it was christened the world’s most dangerous road because of an estimated 200-300 deaths each year. Death Road runs along the side of a precarious cliff for most of its length. If you tip over the edge, it is 600 metres straight down and there aren’t any guard rails to stop you.

Because of the danger, a new road has been built over the course of 20 years ending in 2006, although there are parts that are still under construction and some impatient Bolivian drivers still tempt fate on Death Road. Since the mid 90’s when most of the traffic started using the new road, the road became a tourist attraction. People suit up and ride mountain bikes along most of the length of the rocky and dusty road. Since the road starts at about 4700m above sea level and finishes at 1200m, very little pedalling is required, you just steer, brake and try not to fall off. Since 1998 there have been at least 18 cyclists die on the road from about 25,000 cyclists who have ridden it…

So, with all that, one must be tempted by the attraction, so a small group of us from a couple of hostels decided to join the masses and ride the Death Road… We were one of about five adventure groups doing it this particular day, with a total of about 40. With 69km there was plenty of room for us.

The day started out slowly, it had rained overnight, which meant that higher up, it had snowed. We were picked up at 9.30 and waited at the bus station for about 2.5 hours before the police opened the road. Then with everyone going at once, it took us nearly 90 more minutes to get through the check point out of town. For a ride that was supposed to begin at 10.30, we finally got started at 2pm.

At 4,650m it’s icy and we all shivered while getting into our clothing for the ride. Then after safety instructions we were off along the first 9km of road which is fully sealed. Being sealed means an easier run and for some a faster one. 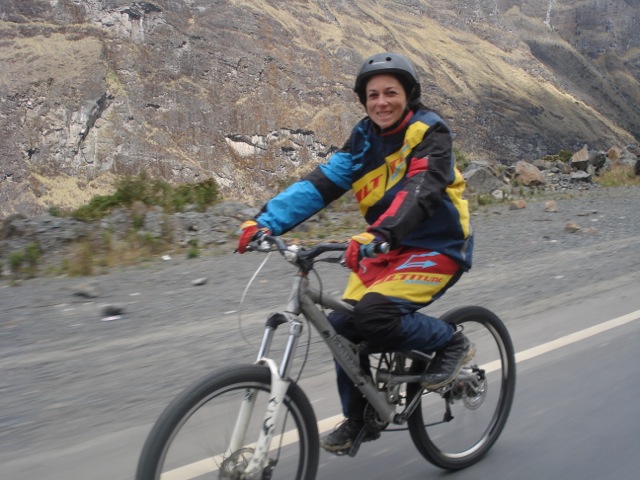 The first part on the sealed road was amidst amazing views of the snowy peaks. The sealed road can be made out on the left of the photo below… We made good time overtaking slower trucks and buses as we raced along.

Then, we were back in the van and driven to the official main entrance to Death Road, where it actually becomes a rocky, dirt road. We had a late lunch then headed off, still dressed in out full kit as it was icy, and those without sun glasses had tears streaming down their faces. After a time we stopped to pose for photos – something we did regularly along the road.

A couple of times during the ride, we were tailed by a truck and had to pull off to the side to let it past.

As we got further along the road, it began to get warmer and thankfully the van we came in was following us down so from time to time we could strip off some of the layers. On one of the more famous corners of the road, we took photos on the edge of cliff. Some of the group were more cautious about being close to the edge while others of us were less worried. That’s me on one leg…

Again as we got lower, the temperature grew warmer, and even passing under the occasional waterfall sprinkling the road was not enough to cool us down. Then we were forced to pull to the side as a series of trucks went past…

About three quarters of the way down, some of the locals were having a celebration on the side of the road and we stopped for photos. 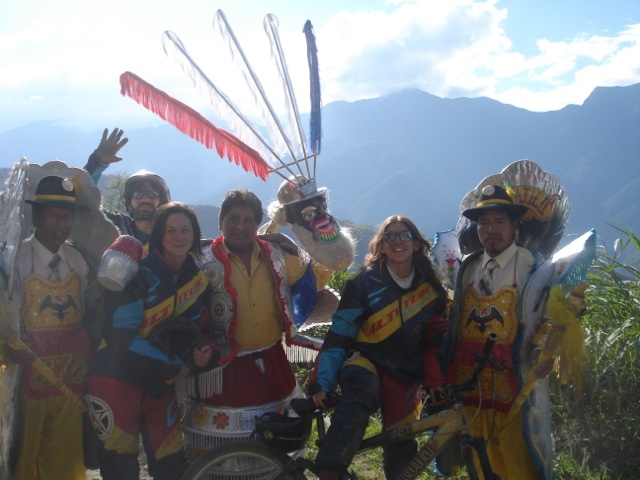 By the bottom of the road, some of us had stripped down to singlets in the heat. 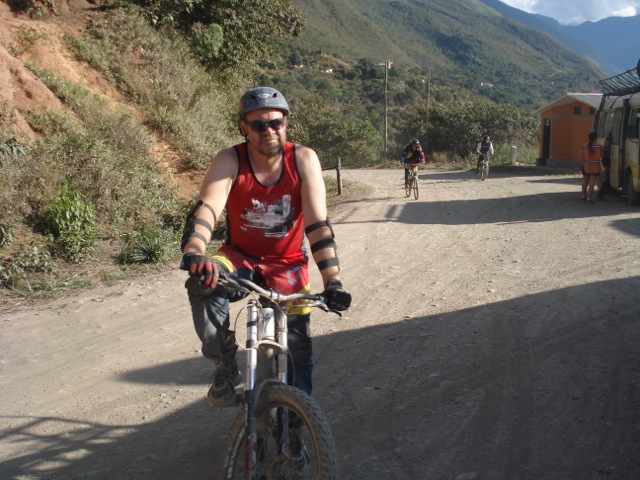 At the end of the road, we were back in the van and taken to a resort where we spent only an hour (if it hadn’t been for the wait earlier in the day, we would have stayed longer). We did get to have a dip in the pool, some food and a couple of beers before getting back into the van and the 3 hour trip back to La Paz.

Overall, it was a very fun day with a fun group of people. The road was nowhere as dangerous as imagined and was exhilarating enough that I have considered doing it again.

Next, I’m off for a three day hike through the Bolivian mountains.