With 47 million people, Colombia has the second largest population in South America after Brazil and it’s whopping 201 million. My first port of call, Cali, is the 3rd biggest city in Colombia, with 2.5 million. Cali is known as the capital of sport and salsa dancing in Colombia.

Most people I’ve met on my travels have said Colombia was an amazing place with very friendly people. This is in vast contrast to what’s generally said about the country. While it’s less dangerous than it’s been, there’s still a guerrilla presence. They are kept at bay by the plentiful armed military, police and security guards everywhere.

After an eventful 20 hour bus ride from Quito in Ecuador, I welcomed my arrival. The bus was full of Colombians in their early 20’s who had boarded the bus in Lima, Peru, 2 days earlier! They were more raucous the normal, meaning I didn’t get much sleep overnight.

In Cali, I caught a taxi to my hostel and went out to check my surroundings. The hostel is in an outer suburb but I found a large area of restaurants just around the corner, including 2 supermarkets.

Then after a better sleep, I decided to see the city centre by taking a free walking tour. Cali has its share of awesome architecture, although in 1971 they decided to tear much of it down to make room for the Pan American Games. Some still remain though, such as this church…

And this plaza with a history of the city on the wall beyond it.

Of course it wouldn’t be South America without a fountain or sixty.

Or the occasional colonial building… 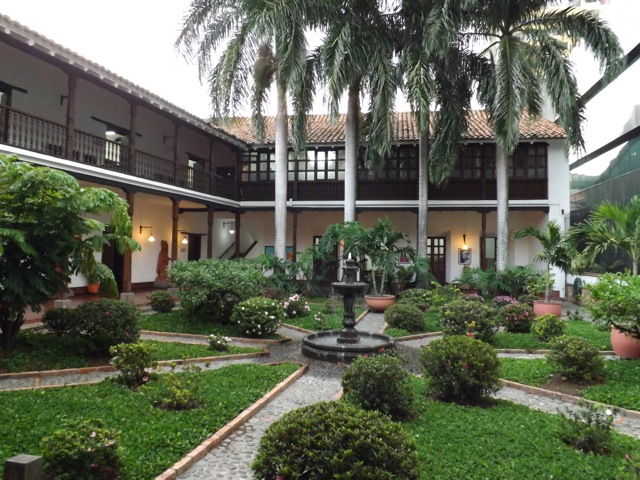 I only stayed three nights in Cali, so I tried to make the most of my time. I caught a taxi up to see Cristo Rey… yes, a giant statue of Christ. Many cities in South America have one of these in the hills ‘protecting’ the people. Unlike the one in Rio de Janeiro, this one is free.

It also allowed me to see some awesome views of the city from above.

Then after 3 rather warm days – it’s quite humid in Cali – I caught the bus north to the country’s capital – Bogotá.

One thought on “Cali, Colombia – Impressions”