For the past few months I’ve been hibernating in New Zealand, working and resting from my travels. But next week a group of us will be doing the Tongariro Crossing so I figured I’d get in a bit of mild training by climbing six of Auckland’s volcanoes.

Auckland, New Zealand’s largest city, was built upon the Auckland Volcanic Field which contains around 53 dormant volcanoes. While many have been mined flat, some still protrude from the suburban landscape and offer great views over the city (and mild climbing experiences). 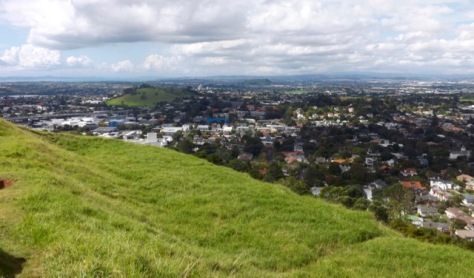 From Mount Eden and looking east there is Mt Hobson to the left, Mount Saint John (vaguely) to the right and in the distance Mount Wellington.

Mount Eden – Maungawhau – 196m
The tallest of the six volcanoes is also the closest to the central city.

For this reason it is a very popular mountain among tourists providing great views of the city and Auckland Harbour. 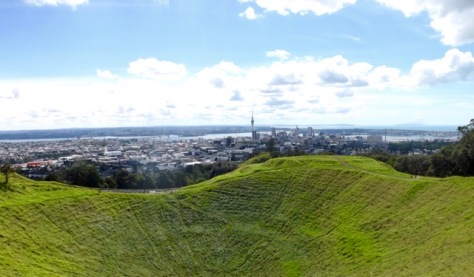 Mount Eden has three craters and has easy access with car parks in several locations up the mountain. I began at the lowest point I could find to get the most of the climb.

Mount Saint John – Te Kopuke – 126m
My second volcano for the day is a lesser known one barely visible until you are virtually right on top of it. Compared to Mount Eden’s busy tourist vibe, I was alone on Mount Saint John except for a solitary family enjoying a picnic and a number of sheep. There is no car access to the peak and only a single crater.

The rim of the crater gives excellent views to the east and south, with other directions blocked by trees. There is a good view over the motorway to Mount Hobson near the summit. 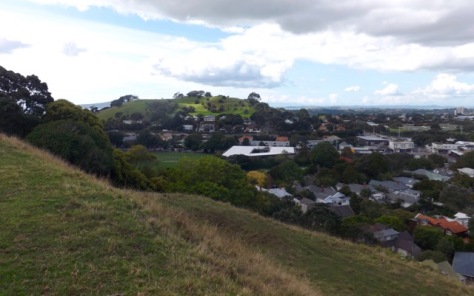 Mount Hobson – Ohinerau – 143m
Directly across the motorway from Mount Saint John, Mount Hobson is perhaps one of the more human modified of all the volcanoes. It has been used for several things over the years, including an advertising medium. Due to its closeness to the motorway, signs and statements can often be mowed into the grass. 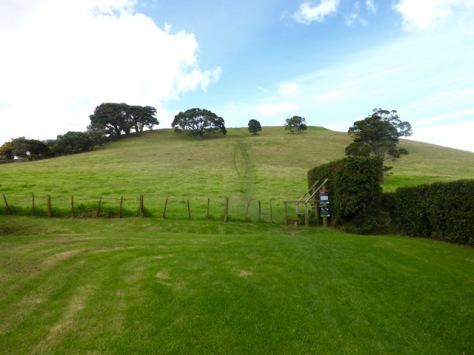 Mount Hobson was my favourite volcano of the day with a short steep climb with few other people around. It also provided perhaps the best views from all sides but especially of Auckland Harbour and Rangitoto Island, the largest volcano in the region. 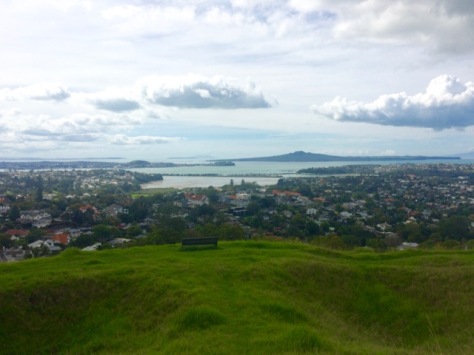 One Tree Hill – Maungakiekie – 182m
One Tree Hill is the most famous “mountain” in Auckland and was once a special Maori landmark. Over the centuries it has had a tree growing at the top, thus its name, but due to attacks on the tree at various times, it was removed.

One Tree Hill sits near the middle of Cornwall Park and is a very popular family area on sunny weekends. Today there were many people in the park and at the viewing area at the summit.

One Tree Hill is the southernmost volcano of the six and provides great views out to Manukau Harbour.

Mount Wellington – Maungarei – 135m
Mount Wellington is the largest volcano in East Auckland and is a popular weekend spot with a deep cone that provides ample climbing for those keen enough. It is the youngest of Auckland’s volcanoes and like most of the others it is not expected to erupt again. 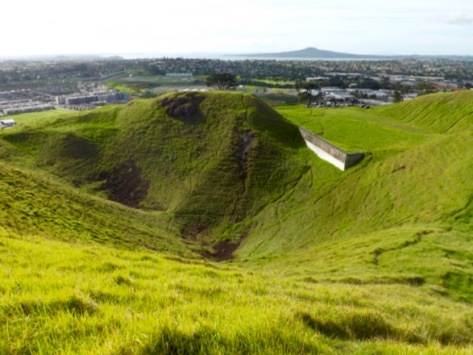 From the summit it provides excellent views over Auckland Harbour to the Bucklands Beach peninsula. 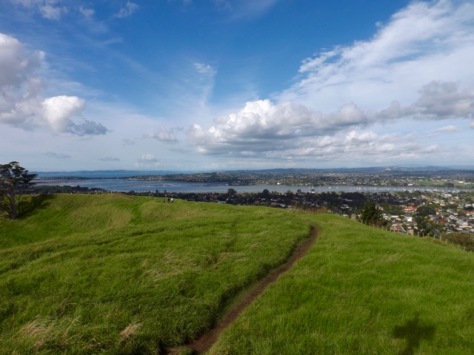 Pigeon Mountain – Ohuiarangi – 55m
The smallest and most eastern volcano of the Auckland Volcanic Field, Pigeon Mountain sits behind the house where I grew up.

I have spent many an afternoon climbing the small peak which gives excellent views in all directions especially along the Bucklands Beach Peninsula and south towards Manukau City.

While the climb up Mount Tongariro next weekend will be close to twice the height of the volcanoes I climbed today put together, it has given me some training towards what should be an epic climb. See you next week.