Day 0 – London to Fort William
To get to the beginning of the hike, I took a 75-minute EasyJet flight to Glasgow and a 4-hour Scot Train to Fort William. It was an easy and relaxing journey with great views across the western side of Scotland including a leg through Loch Lommonds & The Trossachs National Park.

Fort William is a small township nestled beneath Ben Nevis, UK’s largest mountain. It’s a friendly place with several stores focused on adventures and hiking, along with several whisky stores. I also managed to stay at the Fort William Hostel on its 10th anniversary weekend, so got a free dinner and several beers.

Day 1 – Fort William to Gairlochy – 10 miles / 16 km
I headed out from the hostel in the rain and down to get some last supplies and have some lunch before beginning the walk. From the centre of town, I followed the trail past an underwater centre and along a canal, crossing at a train bridge.

The path followed the bay around, through Inverlochy, Lochyside and Caol. If these are suburbs or villages absorbed into the larger town, I’m not sure. I looked back across the harbour back at Fort William with the cloud covered Ben Nevis to one side.

I rounded a football field and came to the beginning of the Caledonian Canal, the canal that connected the three lochs across Scotland, allowing boat travel from one side to the other. I passed Neptune’s staircase, a series of nine locks climbing up the canal. The trail followed beside the canal for 11 kilometres. It was rainy and a little boring, so I just put my head down and just marched. There were pretty points along the canal, very green because of the regular rains.

Towards the end, I stopped for a chat with a couple of guys – father and son – who were wild camping near the canal. I then headed a kilometre and a half along a road to my campsite, where I pitched my tent next to a couple of ladies. In the UK, when hiking, I’ve usually ‘glamped’ – staying in hostels, BNBs, pubs or hotels. This time I decided to pull out my tent and camp four nights of this 6-day hike. This meant I was carrying a full pack at 20 kg, including drinking water. I’ve carried heavier many times, so it wasn’t a problem. As I walked, I passed Meall Bhanbhaidh, a peak that was easier to walk past than to pronounce…

On most other UK hikes there is a pub every 5km, so I figured I’d pick up food along the trail. I soon discovered the error in this. After leaving Fort William, there were no shops, cafes or restaurants. I got to my campsite with only a packet of breakfast biscuits. Thankfully, I’d found a restaurant a mile further along the road, so after showering, I began the walk. It turned out to be fairly expensive, but I had to eat. No doubt this would not be the last food issue I’d have. On the way back, 100m from the campsite it poured with rain. Yay, Scotland!

Day 2 – Gairlochy to Laggan – 13 miles / 21 km
It rained for much of the night and continued for most of the morning. Thankfully, it stopped long enough for me to take down my sopping tent. I walked the mile back to the loch, crossed to the other side and followed the logical route alongside only to walk a couple of hundred metres to a dead end where a sign conveniently told me as much. I headed back to the bridge and continued up a road. The rain came, and I knuckled down with my waterproof jacket’s hood up. The trail headed off the road and up through a light Conifer forest for a while before again crossing the road and headed down near Loch Lochy. 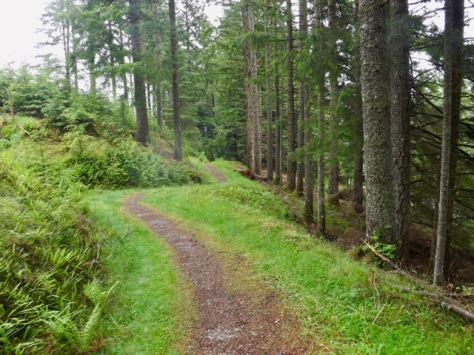 After a long walk through the forest, the trail came back to the road and continued for some time. I passed the small villages of Achnacarry, Bunarkaig and eventually Clunes, but there were no shops in any of these locales. For breakfast, all I’d eaten was three breakfast biscuits and no coffee. At Clunes, with no other options, I ate the last 2 breakfast biscuits before heading up onto a dirt forest road. On the long walk alongside the loch I passed the carving of a falcon on a wooden stump. 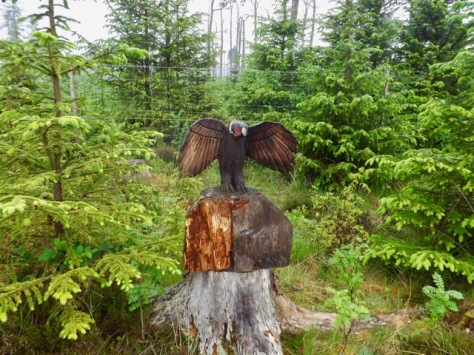 For more than 10 km, the dirt road continued just above the loch covered with dark clouds. I finally stopped for a break near the end of the dirt road, and as I sat on my pack, a group of old walkers came past.

After the break I marched on, easily passing the older walkers before heading onto a road and around to the Laggan Locks. I followed a trail on the other side for a mile to the road, then back 300m to the Great Glen Hostel, where I ran into the two ladies I’d camped beside at Gairlochy. Since we were 2 hours early for the hostel, we sat in the common room and chatted, something that went on well into the night.