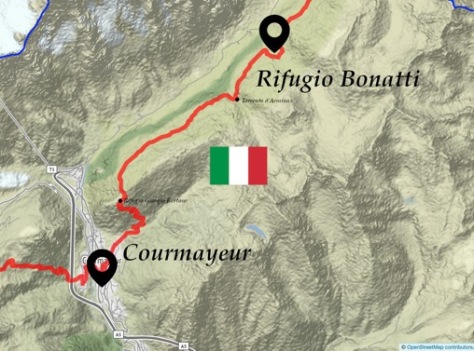 After a good night’s sleep and a massive breakfast at my Airbnb, I head down into the town for last-minute supplies. I stopped to take a photo of where I’d climbed down from yesterday.

From Courmayeur, the trail follows a steadily climbing road for about 3km before cutting into the forest. Thankfully, my Airbnb at 1250m elevation was halfway along this road, cutting a bit of climbing off my day. At the end of the day, I pushed into the forest and up a fairly steep set of zig-zagging paths. With little to see but trees, I found my zone and got on with the climbing. I eventually came out of the trees at 1850m to great views across Courmayeur.

A further 100m climb and I stopped briefly at Refugio Giorgio Bertone for a cold drink then climbed the hill above where I stopped for lunch. After eating, I had the difficult decision of whether to take the official route or the higher, harder, variant. After being told by my host’s son last night that the walk into Switzerland would be a hard one, I decided to follow everyone else along the easier route. The trail skirted around the side of the valley at about 2000m and stayed that way for about 5km. Always in its stunning beauty, across the valley, the wall of the massif.

The trail pushed into the forest and rounded into a gully where Torrente d’Arminaz, a wide and fast-flowing stream ran down the mountainside with a bridge crossing it. As it had been another hot day in the mountains, I found a great spot, got my feet out of my boots and into the icy water. No doubt the sound of my pleasure reverberated along the valley. With no hurry to push on the last couple of kilometres to my rifugio, I hung out at the spot for some time. As I did, other walkers came by, and they too took the opportunity to cool off in the water. Of course, it wouldn’t be right without one of my Dutch companions, this time the Dutch guy, who also got his feet into the water. After a while, we dried off, booted up and headed out. 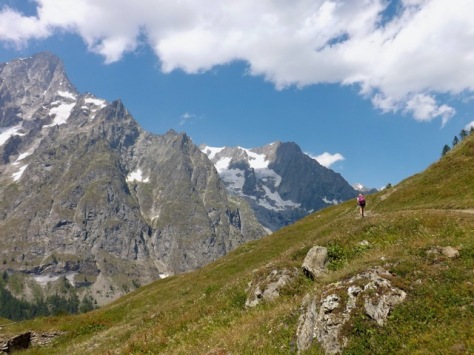 The last couple of kilometres were an easy walk, and we came past another Dutch trio, a couple and their son, who I chatted to as we came to final 50m climb up to the Rifugio. It was still early afternoon, and the Rifugio didn’t open until 4pm, so as a group we hung out around the tables chatting in the heat. Because of Coronavirus, the rifugio was only accepting prebookings, so the Dutch guy continued on to find a wild camping spot. After a shower, I hung out with the Dutch family. We drank beer and ate Italian sausage while talking about the trek and admiring the view. 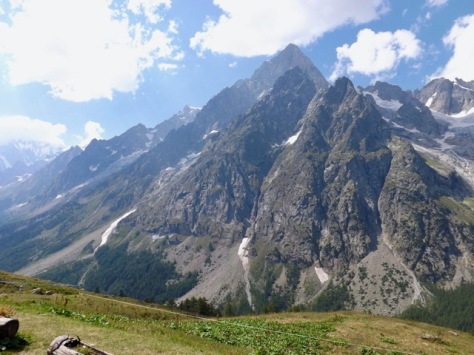 The father, about my age, had walked this route a couple of times. He had also climbed many of the peaks along the massif. I hung with them during dinner, which was full vegetarian, and then a couple more beers before retiring to bed early in preparation for the coming day.

As yesterday was not as hard a day as I’d read, today is supposed to make up for it, with an intense descent, a hard ascent and another long descent. After breakfast, I bid farewell to the Dutch family, another group I wouldn’t see again and headed out around the back of the Refugio. Over the next 3km, there would be some minor climbs and descents, but the massive wall of the massif across the valley stopped me from caring, the beauty and immensity of it.

I arrived at a farmhouse and saw that the trail cut down the mountain on switchbacks, although nothing too steep or difficult.

I followed the trail, descending 250m to Chalet Val Ferret, where I stopped for a cold drink. The weather again was warm, but storms were on the forecast later in the day. I followed the river for a short time until I came to the beginning of the first climb, which was crowded with cows. Looking for an alternative route, I followed the road around for a bit before climbing the steep grassy slope, a 350m climb before it flattened out. A short sharp climb took me to Rifugio Elena, which is closed this season. I stopped for a break and a bite to eat before the big climb to come. The view opposite…

The first signs of dark clouds could be seen as I climbed the at times steep path zigzagging its way up the mountain for another 475m of elevation.

Since I’ve been climbing for five days, while the sweat is still pouring off me, my legs have grown used to the effort, and again I don’t seem to notice the hardship as much. As I topped Col Val Ferret and the border of Switzerland, I stopped for lunch and to enjoy the view, putting on a jacket in the cooler breeze.

After eating, and at the first signs of rain, I headed down the other side into Switzerland. The trail flowed gently down into the valley, and I stopped as a Marmot ran across the trail.

Not long after, the rain came briefly before the heat again rose. I followed the trail down before it zig-zagged a couple of times and came out at a farm, Alpage de la Puele, where I stopped for a cold beer. I continued on down on a green hill that felt reminiscent of everything I’ve ever seen of Switzerland, heading steadily down to a river. I crossed and following a road around into a forest.

After passing a quaint Swiss village, I cut down to the river again, where I found many piles of stones. I followed the river for some time, then after a short steep climb, I was deposited in La Fouly, a classic looking Swiss village. After pitching my tent at the campground, I headed into town for a beer and dinner.

I sat alone enjoying a drink on a table next a young British couple and a younger Dutch couple. I was reading my guide book when who should appear but the Dutch girl, who’d already met the two couples. We joined them and began talking about food when an American couple appeared, shortly followed by my friend, the Dutch guy. A good evening was had with the larger group, ending with 4 of us in another bar playing cards. Unfortunately, just as we were leaving, the sky opened in full storm, leaving two of us ran back to the campground.