Las Vegas, in the state of Nevada, is an intense place even if you’re only staying a couple of days. But if you’re planning to stay a week or more, getting out of the city should be a high priority. We did just that, hiring a car and driving to two features of the region:

Hoover Dam
Hoover Dan is situated on the U.S. state border of Nevada and Arizona, 50 kilometres from Las Vegas. The dam was built in Black Canyon on the Colorado River to prevent flooding, provide irrigation and generate power for the states of Nevada, Arizona and California. At the time of construction it was the largest concrete structure in the world.

Completed in 1936, the dam was also used as a major highway, but due to increasing traffic concerns the Dam Bypass Bridge opened in 2010.

The dam created Lake Mead, the largest reservoir of water in the United States by volume. The dam took only 5 years to build and during that time took the lives of 112 people. Sixteen people died in the first year of construction when temperatures in the area clocked in at close to 50ºC. Another forty-two died from pneumonia, although in later years this listing was seen as a cover-up of deaths caused by carbon-monoxide poisoning. 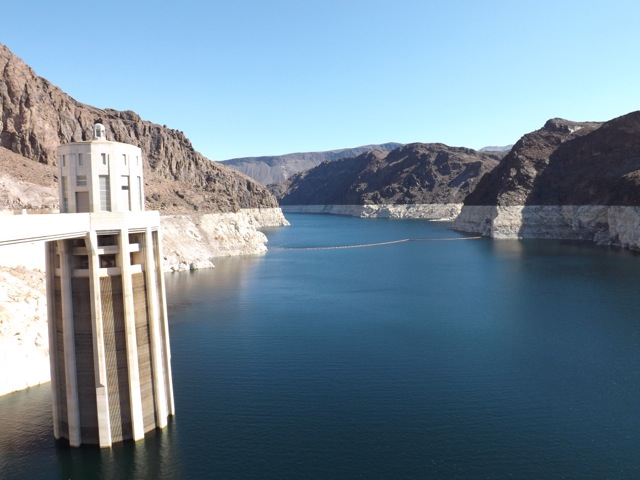 The Grand Canyon
Nearly 200 kilometres from Las Vegas by car is the site of the Grand Canyon Skywalk. The Skywalk is near the western end of the canyon at a site ingeniously called Grand Canyon West. There are several sections tourists can visit at Grand Canyon West; one is  Eagle Point, named after the impression of an Eagle in the ridge opposite…

Eagle Point is also the location of the Skybridge itself, a metal framed ‘bridge’ with a glass bottom. Unfortunately use of personal cameras on the bridge is not permitted, meaning the cost of entry onto the walk plus purchase the photographs is quite expensive. Taking the Skywalk is not required as fearless tourists can walk to the edge of the canyon beside the structure.

Another point of interest is Guano Point, literally ‘Bat Shit Point’. Bat caves were discovered in the canyon, the guano being a good source of phosphates used in farming. The mining lift building still stands at the end of the point.

Guano Point is at the end of a thin section of a ridge line stacked high with boulders, giving great views along three separate sections of the canyon. 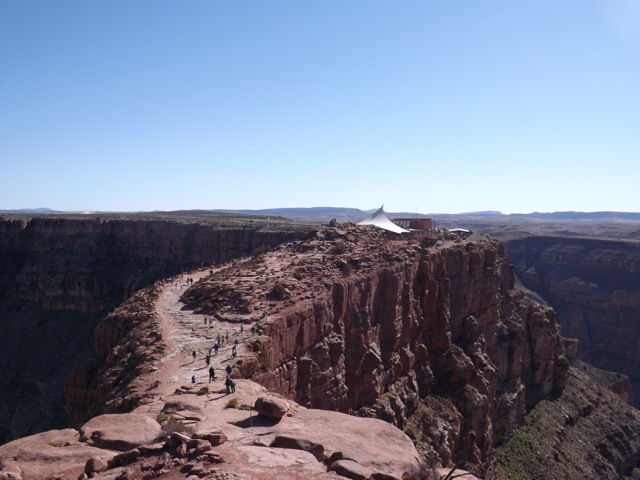 The Colorado River formed the Grand Canyon over the course of two billion years. It is 446 kilometres long, 29 kilometres at its widest and is 1,800 metres deep. It is in the top five largest canyons in the world, although the term ‘largest’ can have several meanings relating to depth, width and length.

While many simply bus to the sections of the canyon, boat, helicopter and small plane tours are available for those who wish an even closer look. 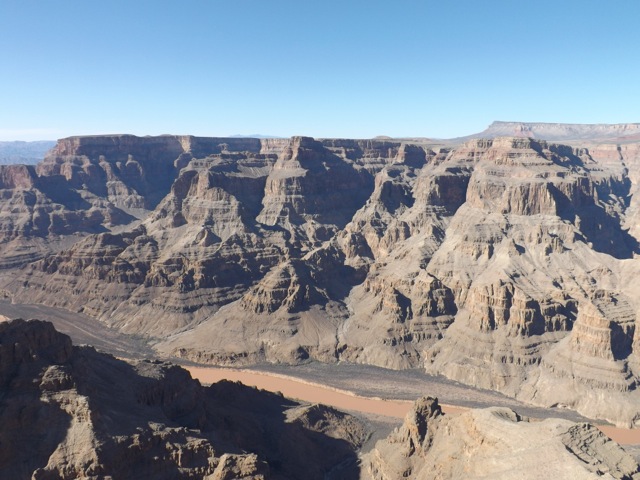 Other Places
These are not the only getaways near Las Vegas, only the two we visited. Other sites of interest are: