The weather continued to be great, but it wasn’t the weather that was to darken the day… more on that later.  The beauty of the white islands was immense and even more so because of the blue skies.  Overnight the ship was moved further along the South Shetlands to Half Moon Island. 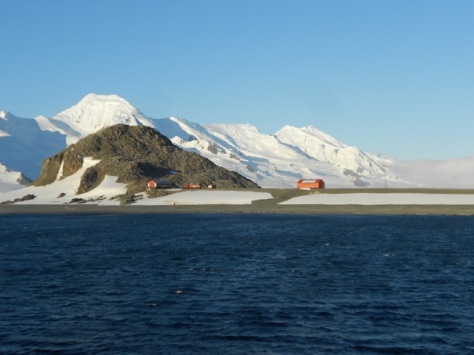 We made landfall early and hiked along the beach with plentiful Chinstrap Penguins hanging out on the rock formations.  Nestled among one group we found a solitary Macaroni Penguin.

While not as plentiful as the penguins, there were many fur seals in groups along the rocky beach.  They too were interested in us, but were more dangerous, so we took care not to get too close as they have a tendency charge. They’re easily warded off if they do by presenting a strong hand and calling ‘stop’, or by simply clapping hands. 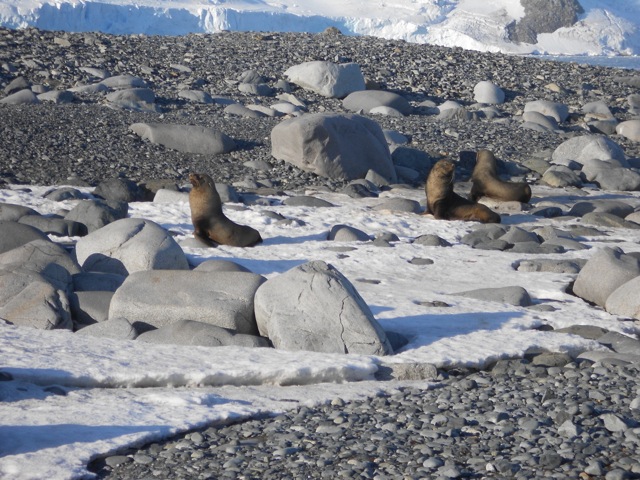 While not available to those of us who took ‘Last Minute Deals’ those who pre-booked the cruise were able to also book kayaking and diving. While today was too windy for the kayakers the divers got to get in the water, well, some of them at least… 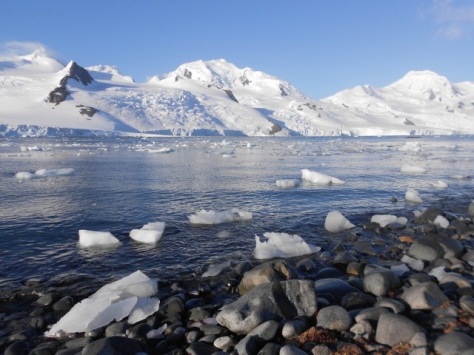 Not long after going ashore, we started hearing reports over our expedition leader’s walkie-talkie about a diver that had gone missing. For the rest of the morning our leaders began to act a little strange, anxious. Our stay on Half Moon Island was extended an hour longer than planned. Then after being ferried back to the boat, we were called to an urgent debriefing. The diver that had gone missing was an experienced Japanese woman. They’d found her drifting in 5 metres of water and had attempted resuscitation, but after 90 minutes she had been pronounced dead. No other news was forthcoming.

This set a somber tone across the boat and we weren’t sure if the trip was to continue. We eventually did get word we were and got back underway, but some of the crew were called to deal with certain things such as contacting next of kin, authorities, embassies and the storage of the body. 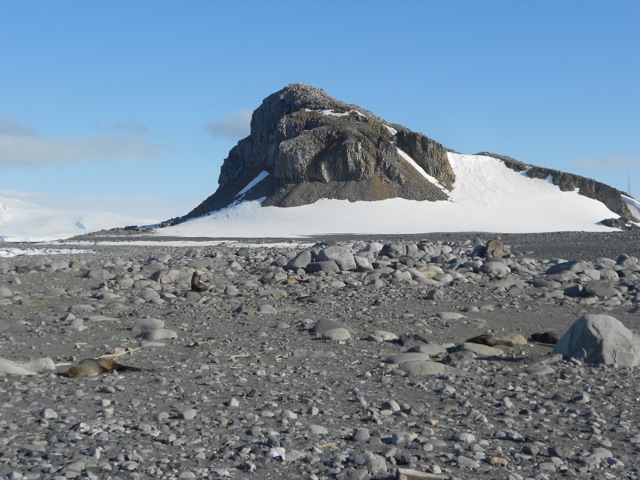 That afternoon we sailed for Deception Island, one of the two known active volcanos in Antarctica. Centuries ago, Deception Island blew one of its sides and seawater flowed in to fill the crater. The plan was for us to sail into crater via Poseidon’s Bellows, where the wall had collapsed…

But the weather wasn’t playing nice and with 35 knot winds, the captain decided it would be too dangerous. Instead we set sail for our next destination,  the Antarctic Mainland and The Great White Peninsula. On the way we spotting what was to become a very common sight… Humpback Whales.

Crossing the channel was an experience. Because of the winds the swell went a little crazy and that evening only a little of half of us passengers made it to dinner. It wasn’t long before I too retired to my cabin a little worse for wear.

We were lucky, today was the fifth beautiful day in a row, clear and sunny. That’s five more than some expeditions. I awoke at 4am after going to bed at 8.30pm the night before and felt great. I peered from the cabin window and saw clear seas and the long white peninsula. We anchored at Cuverville Island surrounded by white cliff lines in a bay dotted with icebergs. It’s hard to describe the beauty of this place.

We landed and wandered around the Gentoo Penguin colonies for some time.

On the way back we were taken on a short zodiac cruise through the icebergs, many of which were a pure blue…

I even had the wonderful experience of a leopard seal coming up to the craft to check us out before it went back to playing with the penguin that would eventually become its next meal.

After lunch the ship moved into a large and beautiful bay strewn with icebergs with the plan to make landfall at the end. The boat slid gracefully through the crystal clear waters… 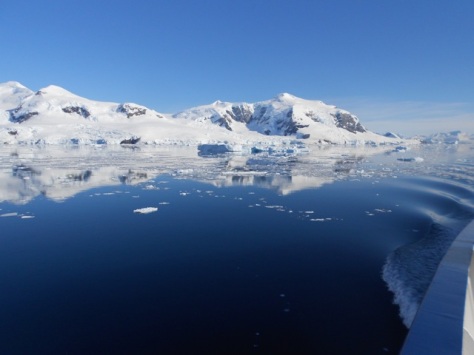 …and in some places it was so calm the icy water mirrored the snow-covered mountains and massive frozen glaciers. 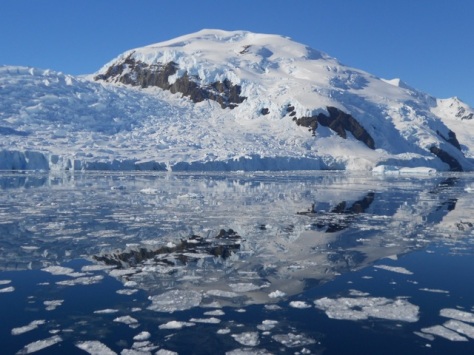 We made landfall, and set foot on the main landmass of Antarctica at Neko Harbour. Woo-ha! And guess what? There were Penguins! Surprise!

We hiked up the side of a mountain to a great viewing spot. I was first to sit on a rocky outcrop looking out across the magnificent bay.

Then some of us took a ‘polar plunge’, going for a swim among the icebergs.  Since salt water freezes at just below zero degree celsius, it was cold but not as cold as expected.  If anything, it was colder getting out.

Then in the beautiful clear evening what else do you do in Antarctica? We had a BBQ on deck, of course! It was a little chilly but great! We put down anchor in Leith Cove and watched the sunset.

Next we’re heading further along the peninsula our Next Stop, The Polar Circle.