Today is my last day in Tonga and I must admit that I’ve rather enjoyed this little backwater Pacific Kingdom. While Vava’u has been the most commercialised of the islands groups, it’s not really that commercial at all. Tomorrow I face a flight to Tongatapu, a long wait at the international airport until my midnight flight to Auckland. I arrive at 2am and sleep in the airport until my 7am flight to Brisbane and home, well what home I have left there.

Every year as part of their breeding migration, Humpback Whales arrive in Tongan waters. This has led to a commercialised ‘swim’ with the whales all throughout the kingdom. No trip to these islands should be done without going on of the swims. I’m not sure I agree with the idea – some of nature’s creatures should be left to just get on and live, not be harassed by we humans. So, I’ve held out from going for most of my stay. But on my second to last day – yesterday – I caved and organised a trip. As I said, you can’t come to the islands without swimming with the whales.

The first objective of the captain is to find where the whales are, then get up ahead of them and send the swimmers into the water. The whales will often hang out and ‘play’ but if they move away, we get back on the boat and try again. We only try twice before ‘getting the hint’ and finding another set of whales. Because there are many operators, they often work in conjunction with each other to locate the animals and to share time with them. 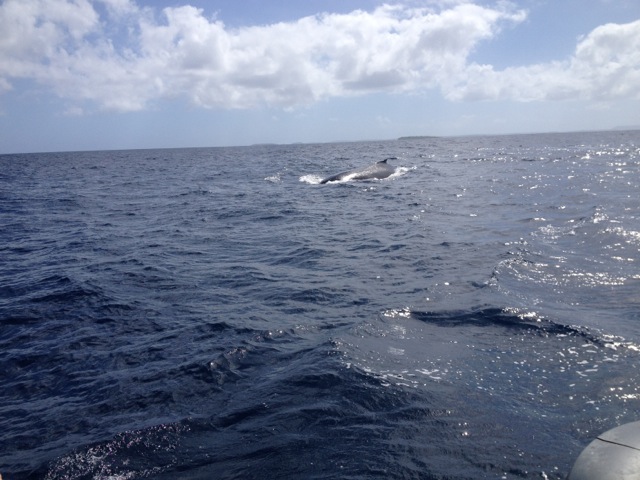 We headed out to the west side of the islands and quickly located a pair of juveniles playing. We hung out around them for a while, watching them and getting the boat into position before getting into the water. In our snorkelling gear we were able to watch these animals go past. It’s magnificent to see such huge animals in their native environment. They weren’t that playful, however, and moved off. So back on the boat, we followed them and had another go. They moved away quickly again, so we left them alone.

We received a call from the other side of the islands. A crew working in conjunction had spotted a mother and her newborn. Like a tag team crew, we arrived at the specified location as other boat and it’s cargo of swimmers and they headed of – they’d been swimming with the whale for an hour – so it was our turn. We were in the water as the great juggernaut of the mother flowed past us with it’s baby – only a few days old and twice my size. The beauty of the mother just hanging there in the water was immense and we swum for a few minutes watching her interact with her baby before they swum off. Back on the boat, we followed and tried again. This time we managed only a glimpse before they give us the hint.

While I would have liked to have swum with them for longer, the mother and her calf were the last set of whales we saw for the day. We did a bit more snorkelling around the coral gardens and Swallows cave. It was a very sunny day today and the coral just shines in all its colours in the sunlight.

Not many photos of this, unfortunately, as I did not have an underwater camera today.

Back to Brisbane tomorrow and time to organise more trail walks.