For my second hike of the day, I arrived at the trailhead at about 2pm.

The trail begins at a locked gate and heads into the National Park on a wide dirt vehicle track. Several tracks lead across the path and I had to retrace my steps a couple of times to ensure I was on the right one. Eventually I found another locked gate on the side of the trail marking my way forward. I continued to the east, passing a junction that according to the map would lead to my eventual exit route from the circuit. I followed the dirt road for about 1500 metres until I came to another locked gate. While the vehicle track ended here, the walking trail continued on the other side. I walked on up a steep hill along a fairly obvious path to a bluff and peered down a cliff. 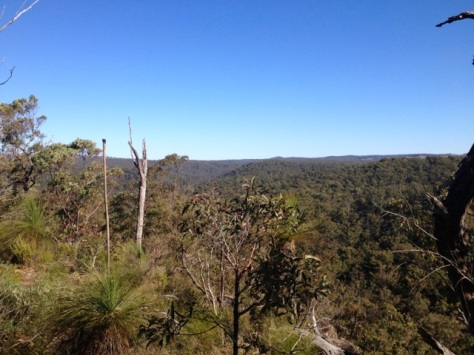 There was an obvious trail heading steeply down the side, so I headed down. I came to an area where the trail seemed to fade out and found the remains of a crow. No body, just feathers everywhere. I wondered what could have made the mess. I then wandered back and forth looking for a trail using the mass of feathers as a reference point. With no identifiable track, I made my own and headed downhill towards the creek… 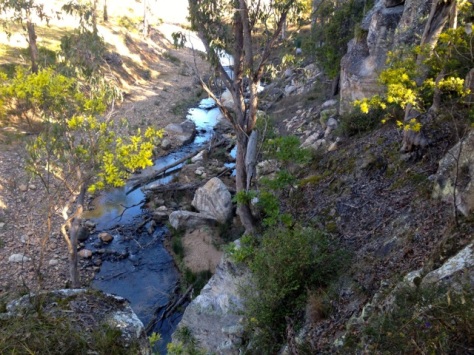 … and followed it until it began to widen – Perseverance Creek.

I headed along the Lantana brush covered left bank, trying to avoid the little thorns wherever I could. The trail headed along the top of the bank but was either cut off by a fence or Lantana, forcing me inland through more patches of the scratchy thorny weed. Oh for a machete! I would push through to the trail along the top of the bank only to be forced back inland again. By this time the backs of my hands and forearms were heavily scratched, nothing serious, just war wounds of the hiking kind. 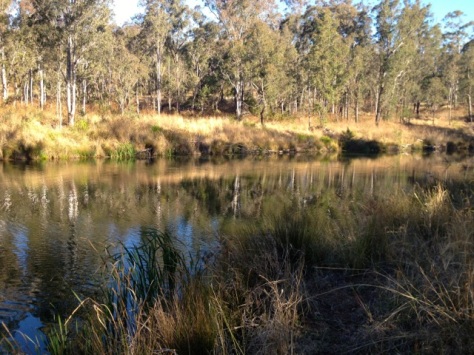 The river is beautiful as it curves around through the land. I followed it around on a thin trail avoiding the bushes and hanging on to grass so as not to fall into the water. I edged around to a tight bend in the river where a gully climbed between a pair of ridges. I headed into the gully but was confronted by wall to wall Lantana. Yay! Already covered in scratches, I rolled down my sleeves and pushed through until I came to a path crossing the gully. I ignored it and continued up the gully but the Lantana became too harsh. I backtracked to the junction and followed the path to the north until it hit another wall of Lantana.  I retraced my steps again and pushed to the south.  While this hit a thinner wall of Lantana I decided to push through as I was running out of light.  With the Queensland sun setting early in winter, I didn’t want to be caught on the side of a bank or halfway up a ridge at sunset.

Past the thin wall of Lantana, I headed along the side of the bank and around towards the ridge line. I walked for some time above the Lantana line with an awesome looking rocky ridge above me. I love rocky ridges. With the eastern face I was on already blanketed in shadows I hurried on. 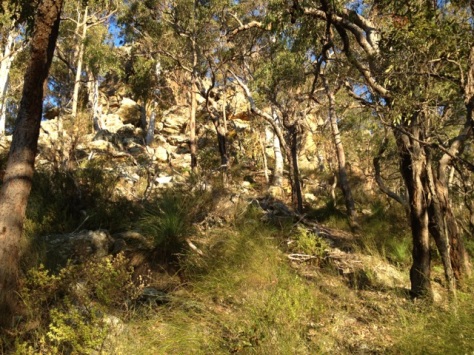 I rounded the side into the sunlight and pushed on further. Atop the ridge the rocky buttresses climbed into the sky with wind blasted small caves formed in their sides. There is one cave in particular which is an attraction of this hike and one of the reasons I was here.

The cave did eventually come into view high on the ridge and I climbed up to have a look. It didn’t take me long to reach the aptly named Wind Cave with its sandy floor.

I stopped briefly then pushed on to the top of the ridge where I took a rest. I turned to look back from where I’d come and for the first time saw the glittering blue of Lake Perseverance stretching away. This is the reason I love to hike, the unexpected views.

Then behind me at the top of the ridge I found a dirt 4WD track. The track was wide and easily followed for the rest of walk. With still a kilometre or so to go, the sunset leaving me in deep shadows surrounded by forest.  Thankfully I always carry my head torch and spare batteries. Soon after I arrived back at the junction I’d seen on my way in and shortly after arrived back at my van.

Overall, an adventurous day of blood and sweat. I was looking forward to a hot shower, so headed off to the camping ground. I’m going to be sore tomorrow for my third hike of the weekend.