The Crows Nest National Park is just north of Toowoomba city, about two hours West of Brisbane. Lake Perseverance is part of the National Park and separates the two areas I will be walking this weekend. I drove up on Friday night to give myself plenty of time to walk the tracks I wished to.

Today I will be walking in the southern end of the National Park. There are two hikes in this area and both are untracked and unmarked, however, guided by the book Take a Walk in South East Queensland – my SE Queensland hiking bible – I should be fine.

I should be fine… famous last words. Following the instructions of the book I headed south along the fence line down a small gully and uphill to another road. This is where things hit a snag. After the gully I came across a line of vegetation that I couldn’t get past. It was early in the hike so I decided to backtrack to beginning and instead followed a short road to the east.

When the track finished abruptly I noted a pink ribbon on a tree – generally a sign of a marked trail – so I followed it. As expected the pink ribbon led to another pink ribbon and to a third. I kept following through a series of pine and ironbark trees. The area between the trees was light and grassy, with some sandy areas. The pink ribbons turned north at the top of the cliff over Perseverance Creek and I followed until they stopped abruptly. After there being one every ten metres or so along the trail it was odd that the ribbons would just stop. I skirted around in each direction looking for the signs of the next ribbon but found nothing.  So taking a guess, I headed north. 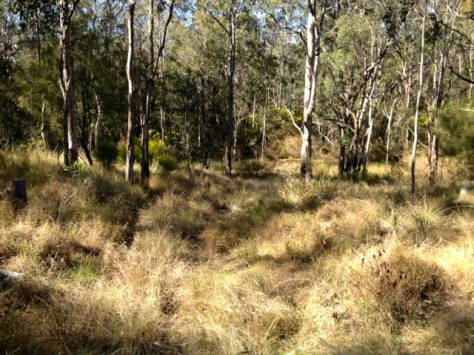 After a short walk along the river’s edge, I came to a barbed wire fence that spanned the river and headed up the bank. I followed the fence inland for a while until it turned off and headed back into the river. 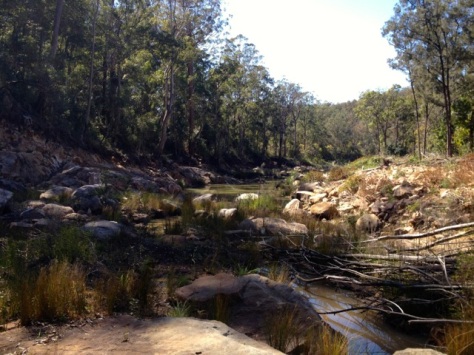 I continued north, checking the map with my compass to ensure I was on the right path, or at least what I thought was the right path. I headed north and crossed through a large patch of Lantana. Lantana is a weed with little thorns along the length of its long thin branches that catch on to everything. Lucky there wasn’t much in the patch and I pushed through it easily and continued down the rocky bank to the creek. 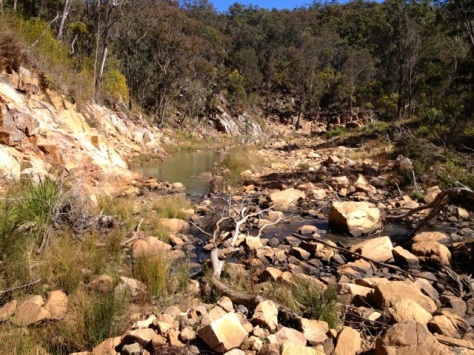 I walked along it for a little bit before crossing at a four-wheel drive track. I headed up a hill and came to another vehicle track, which I followed.

I was supposed to go several hundred metres up the hill to a lookout, but found neither the top of the hill nor the lookout.  Would I have found it if I had kept going? I don’t know. But I decided to head back and when almost back at the crossing, I went down the grassy hill to a set of cliffs and another rocky gorge.

I crossed and headed north along a vehicle track with the creek heading north as well. The problem here was that the book and its map did not show any creeks running north, at all. I continued walking north for several hundred metres along the creek before finally deciding to head back.

At least it wasn’t difficult to retrace my steps back along the trail to my van. While I didn’t walk the exact trail the book had suggested, I still got a good hike in for several hours and perhaps covered ten kilometres. I arrived back at the van at 1pm, had a bite to eat before heading to the location of the afternoon’s hike, stopping for a quick coffee on the way.