Mt Barney is a pair of peaks on the border between Queensland and New South Wales. It’s the third tallest mountain in South-East Queensland. While it’s only 1354m above sea level – a molehill compared to many of the world’s mountains – it’s up there by Australia’s standards.

For my last outing with my hiking group before I leave Queensland I arranged to climb the lesser known trail up Mt Barney’s South-East Ridge.  The South Ridge is the more common way up for this trip will be our descent.  The South-East Ridge is more difficult as it’s steeper and more exposed in several places.

The hike has an estimated 10-hour length, so I arranged for the group to meet at 6.30 a.m. outside the information booth in Rathdowney. With 7 of us in attendance, we drove to the car park at the base of the mountain. Thankfully the signs confirmed where we were supposed to be, as the mountain and most of the area was shrouded in low cloud. A bit of a contrast to the fact the temperature was supposed to rise to a muggy 30ºC today.

The car park is about 3.5km from the beginning of the South-East Ridge trail, along a dirt road that works its way towards the mountain by crossing a couple of small hills. There is only one way to find the South-East trail, the letters SE carved into the trunk of a tree beneath a cross. What the cross means I’m not sure, perhaps an ominous message left by previous climbers? 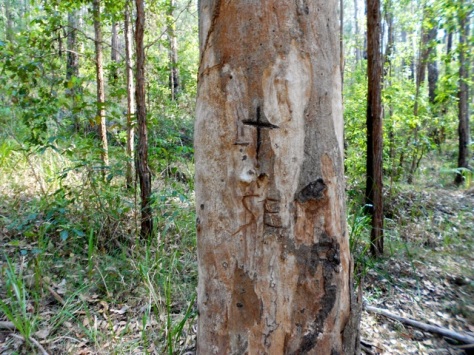 The thin dirt track began at a gentle slope but grew steadily steeper as it worked its way towards a rocky spire. 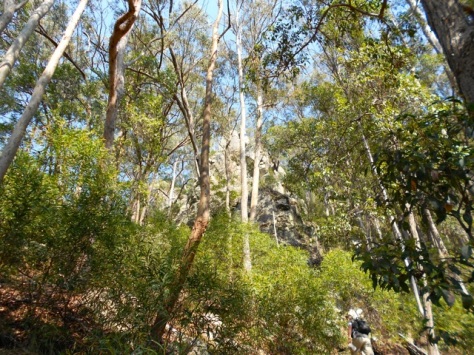 At our backs as we climbed, the wedding cake topped Mt Lindsey and for much of the morning, cool breezes flowed from the east. 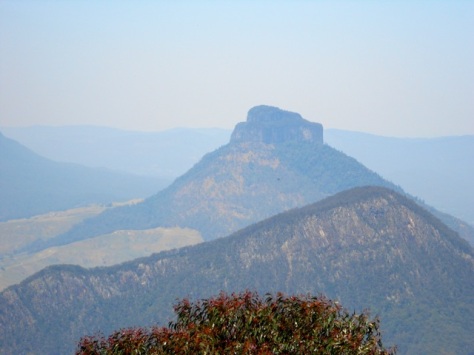 The climb was anything but easy, and the 7 of us stopped regularly, usually when the ridge came to a flat area every 100m or so. The trail changed constantly, moving between dirt and root steps, to rocky steps cut from sheer gullies with plentiful handholds to smooth rock scrambling.

At the top of the short flat areas we often looked down on something different, a sheer cliff face here, a long rock gully there or down on top of a mini forest. Each time we’d scramble up to the top of a ridge we’d find the great spire of the next one staring down at us. This gave the sense that the mountain just keeps going, on and on.  But eventually we climbed over a ridge to find we’d run out of mountain.  The top of the Eastern Peak is an open rocky area giving us a total 360º view.

Unfortunately, because of the early November heat the views from the mountain were hazy. The heat also brought out many bugs that seemed to dance in the air around us.  They seemed quite attracted to the smell of our sunscreen as we reapplied.

We stopped for lunch before heading down a vague trail that led towards the saddle between East and West peaks.  We climbed down flat rocks with the rocky spire of the more difficult West Peak ahead of us.

Thankfully for grippy hiking boots the decent wasn’t difficult and we arrived at the saddle in short order. The saddle is a small rainforest and has a space set aside for camping. 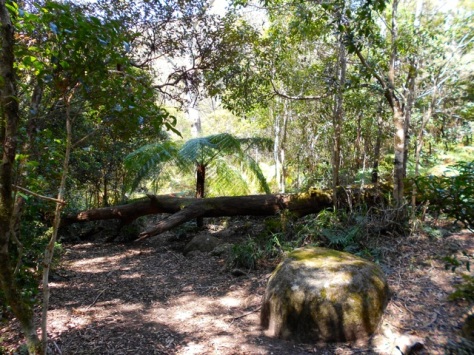 The South Ridge trail, also known as Peasant’s Ridge, was more difficult than the ascent of the South-East ridge. While it wasn’t as arduous, it was far more humid, with the trees hiding not only the sun, but easterly breeze as well.  This meant our descent was in the full humidity, so it was hot and uncomfortable.

Eventually, we made it to the bottom and headed towards the car park. This was perhaps the hardest part of the day. After climbing the mountain, we were hot, tired and sore.  The four kilometres of dirt road just seemed to go on forever and the two small hills we’d climbed at the beginning of the day seemed each as tall as Mt Barney itself.

Finally, eight hours after we began we made it back to the vehicles, then it was back to Rathdowney for a well-earned beer.  An excellent final hike in Queensland.