The Grampians in West Victoria are a chain of mountains at the end of the Great Dividing Range which starts in Northern Queensland. It includes the Main Range National Park where I have enjoyed walking in South East Queensland and have documented elsewhere on this site.

The Major Mitchell Plateau is one of the handful of overnight hikes in the National Park and like the other two, is only an overnight hike. The Plateau is not a linear hike, meaning the beginning is not the end. I’m hoping to hitch a ride back to the beginning once I’m done. If I can’t, I’ll walk the 12km along the road back. 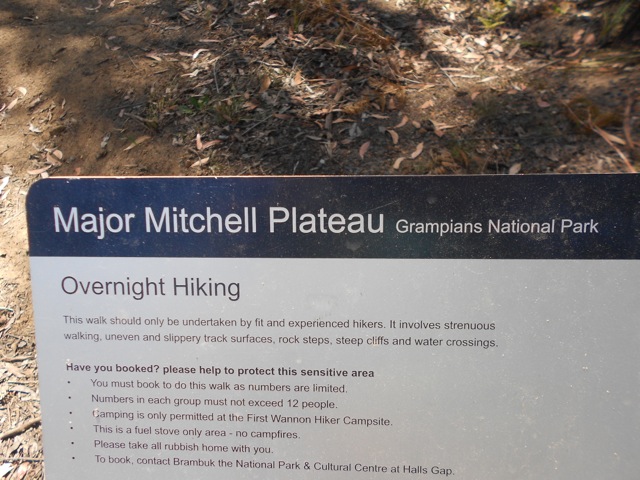 The Major Mitchell Plateau begins at the Grampians Tourist road – the main road heading through the Grampians. The car park is about 10km south of Hall’s Gap. After a brief downhill, the trail begins its slow steady climb along a dirt track towards the Mount Williams car park with plentiful wild flowers along its length. 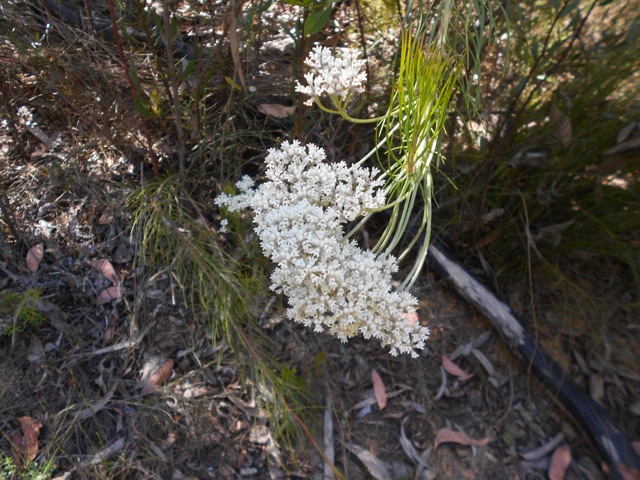 There are several creeks near the bottom where floods have destroyed the footbridges. 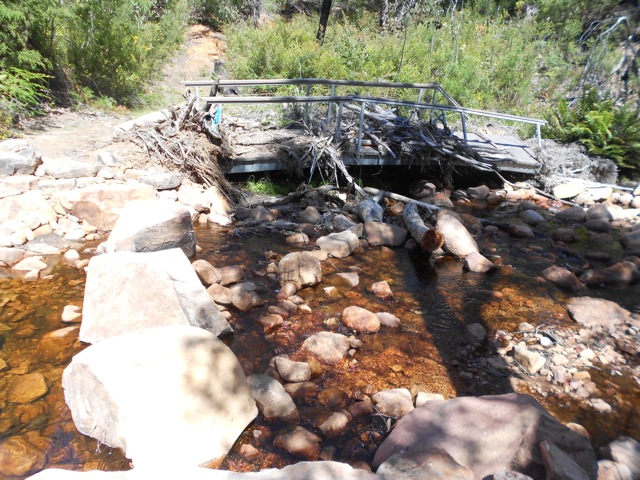 As you climb, you can see the jagged ridge line of the Serra Range across the valley. 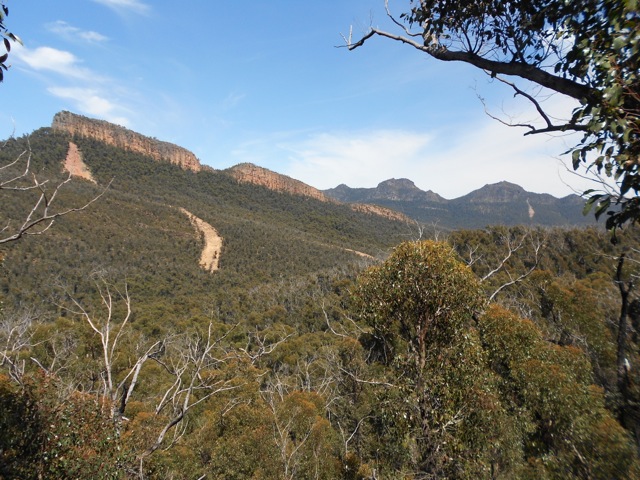 I passed Cathedral Rock and continued on the steady climb, walking around the edge of a steep incline and passing many a rocky formation until I arrived at the car park. It was a warm day, so I took a break for lunch.

The climb to the summit is along a bitumen road at a brutally steep grade. The first couple of hundred metres are the worst and it evens out a little above that, but only a little. They describe the climb as relentless. I agree. I eventually made it to the summit with 360 degree views of the Grampians…

It was early in the afternoon, so I decided to ‘boots off and relax’ for a bit.

…which bottomed out at a small forest at the base of the plateau cliffs called Boundary Gap. I rested for a moment to prepare for the coming steep climb. And it was steep. I climbed through the forest until I broke the tree line and continued up a rocky path to the base of the rocky cliff faces, pausing frequently to catch my breath. The trail lead me scrambling through rocks up through the cliff face, ledge to ledge until I finally struggled over the edge.

The top of the plateau has a lot of flat cascading rocks and plentiful hardy plants. As I walked the final kilometre to the camp, I came across an echidna with its head buried in an ant nest.

Just before sun went down and I retired to sleep, I noted the sky was red. Red at night shepherd’s delight.

It was warm this morning when I awakened. I poked my head out of the tent and the sky was red. Red in the morning, shepherd’s warning. Now that’s confusing. Red at night AND in the morning?? I dunno. A delightful warning? Oh ho ho ho, it’s gonna rain!

After breakfast it started to spit. I don’t mind hiking in the rain, I just prefer to break camp first. The sky allowed me to pack and in short order I was ready to go. The trail headed further along the plateau’s undulating top, moving through rocky areas and skirting the often spiny plants that lived up here.

The path meandered along the top of the eastern cliff line and I stopped from time to time to stare out across the plains of Western Victoria spread hundreds of metres below. I had to brace myself as I stood there. While the wind was not strong enough to push me off the edge, I didn’t want to be party to a freak gust.

Across the top of the plateau, there are plentiful flat stony areas and it could be rather confusing to navigate. However, apart from the occasional yellow arrow pointing the way, there were cairns that helped me navigate my way. The rain did not stay away for long, but it was slight and eventually stopped.

At the end of the plateau there were a pair of cairns. I had been told that the descent was rather steep, but when I approached the edge it appeared fairly sedate. I descended to a ridge line that lead me to an unnamed peak where I stopped for a break and stared down the length of the Serra Range in all its glory. The sun finally poked its head out of the clouds and would cause the most annoyance; the day was forecast to be 33 degrees today.

The descent from unnamed peak, however, was a lot steeper and I had to take care as I climbed down, not only for the potentially slippery roots and stones, but also the gusting winds. I made my way down as the temperatures soared and the cool breeze became a hot wind. 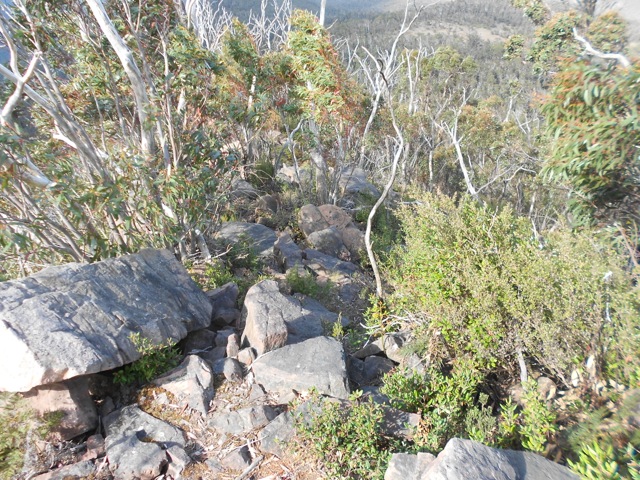 At the base of the peak the trail met a 4WD track and a brief area of open grassy land. The trail soon converged with a track known as the Stockyard Track which continued on up a knoll to a former helipad site.

The rough track continued and I headed down the steep other side of the knoll towards a steep peak that stood out from the trail.

In the heat, I hoped that the trail didn’t want me to climb it and as I followed it went around and between a pair of peaks before heading towards the road. I picked my way along the trail for another couple of kilometres until it finally ended at the road. I changed my sweat drenched shirt and began the 12km trip back to the The Pointy Brick. After only 2 minutes I was picked up by an older couple. He had hiked the plateau on numerous occasions and others had picked him up when walking to the end. The Code of the Hiker. I was thankful.

Next, I’m doing an overnight hike around Mt Gar, still in the Grampians. It is also known as Mt Difficult. I hope it doesn’t live up to its name.

One thought on “Major Mitchell Plateau – The Grampians”