Uruguay’s full name is ‘The Oriental Republic of Uruguay’, an english translated perversion of the name which actually means ‘The republic east of the Uruguay (river)’.

From Buenos Aires the ferry takes just over an hour to get to the small town of Colonia del Sacramento. It’s a must visit if you’re in Argentina’s capital for a few days. Although the trip can be a little expensive, about US$75 return, half of that for border taxes.

After a mad dash across Buenos Aires in a taxi, I made the ferry with about 30 minutes to spare and once through customs and onboard the catamaran, I promptly went for a nap for the hour and ten minutes it took to cross.

Compared to the madly bustling metropolis that is Buenos Aires, Colonia is small, quaint and tranquil. Much of the 500-year-old original town is still there with its original cobblestone roads and buildings.

As part of the ferry booking there was a walking tour around the original township, nestled at the end of the peninsula. We walked to what was left of the wall that had separated the town during the War of Independence. The wall is now only about 30 metres long with a single gate and drawbridge, the rest having been removed. As a welcome there was a white-faced mime standing on a boulder just on the inside of the gate. 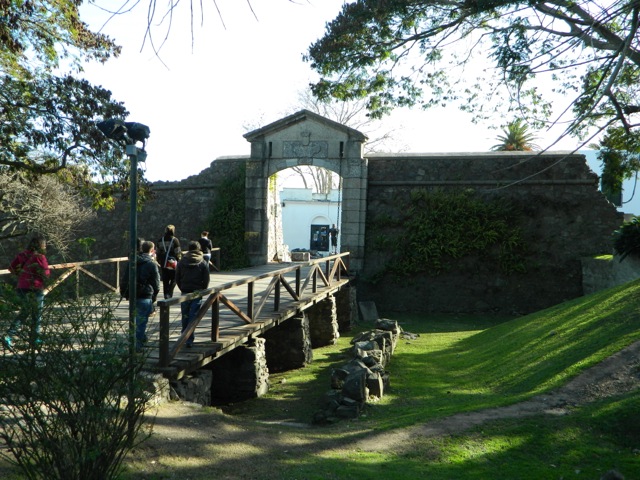 Many of the old buildings have survived through the years and are protected by the government. Some of the buildings weren’t so lucky and have had new buildings built within their old structures…

Other buildings have been refurbished and converted to other uses, in this case a restaurant… 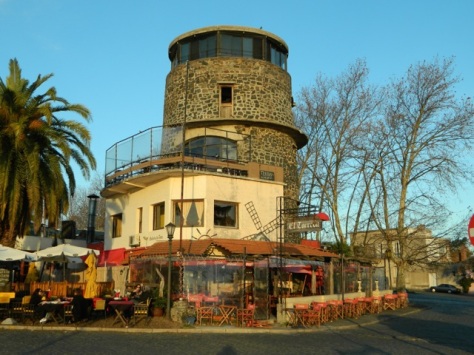 After the tour, I went to find something to eat and found a restaurant where a singer could be heard inside. Outside, there were three old cars that had been converted to other uses… this one into a two-seater table for the restaurant. The other behind has a garden growing in it. 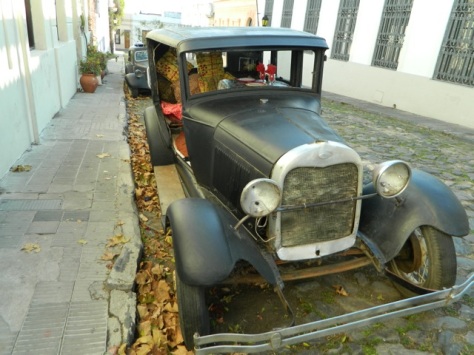 The restaurant was lovely as was the entertainment and they gave the prices for the meal in US dollars, Argentinian pesos and Uruguayan pesos, but it was expensive unless you’re actually paying in US dollars.

After lunch, I walked around the township enjoying the quiet. I stopped at an ATM in hope of getting some US dollars but it had run out.  Many people come to Uruguay from Argentina to get US dollars to sell on the black market, sometimes for twice its value. I was unlucky, they’d run out by the time I’d got there. Later I headed to the bay to watch the sunset. Just to the left of the island, the buildings of downtown Buenos Aires can just be made out.

The trip back across the bay was uneventful and at approximately 10pm local time, I arrived back in Buenos Aires.

This was my only trip into Uruguay. After a couple of more days in Buenos Aires, I traveled north by bus to my final destination in Argentina, Puerto Iguazú – one of the 4 largest waterfalls in the world and home of the Devil’s Throat, Iguazú Falls.