I’m currently riding the length of Vietnam on a Scooter.

Day 12 – Hoi An to Kham Duc – 110Km
Today started out cloudy, but once I got into the highlands it began to pour. Before long I was drenched, even though my supposedly waterproof clothing, drowning my phone in one of my pockets. Then at one point I came around a corner too close to the road’s edge and came off my bike. My clothes took the brunt of the scrapes and I got off fairly lightly thanks to my sedate pace in the rain.

On arrival at the hotel I changed into dry clothes and surveyed the damage. While my phone was wet on the outside, water had only found its way into the SIM slot. This stopped my phone from connecting to the network via the SIM and removes my only navigation tool.

Day 13 – Tham Duc to Hoi An – 110km
As country Vietnam has less than optimal signposting and without the ability to navigate on my phone, I made the decision to head back to Hoi An. This was in hope of getting to an Apple store in Da Nang to get my phone either replaced or fixed. For my ride today the weather was clear with no threat of rain, and the journey back was actually enjoyable with some interesting views.

Returning to Hoi An was fairly easy, although there was the occasional junction without adequate signage that was confusing. In Da Nang I located the Apple Service Centre but as it’s Chinese New Years getting parts would take weeks. I had no choice but to continue my journey without it.

Day 14 – Hoi An to Quang Ngai – 127km
Instead of heading back into the highlands, I rode south along the AH1, the main Asian Highway which stretches for over 20,000 km and crosses 16 countries from Japan to Turkey. As in previous days on the AH1 there were too many road works and even more trucks to spray up the dust. It took me 3 hours to get to the outskirts of Quang Ngai, but finding the hotel without my phone was troublesome. After settling into my room I headed out to find an ATM and to buy a cheap phone. After my purchase I stopped by the tomb of national hero Truong Cong Dinh, famous for leading an army against the french invasion force.

Huang Ngai is also the site the Song My massacre. During the American War, the area was incorrectly identified as a Viet Cong stronghold. More than 400 innocents were slaughtered by American Soldiers, mainly women and children.

Day 15 – Quang Ngai to Quy Nhon – 204km
Today’s long ride was fairly uneventful. The AH1 continued to be the same with many road works, trucks and dust. Today the road cut through many flat, deep green rice paddies on the plains. 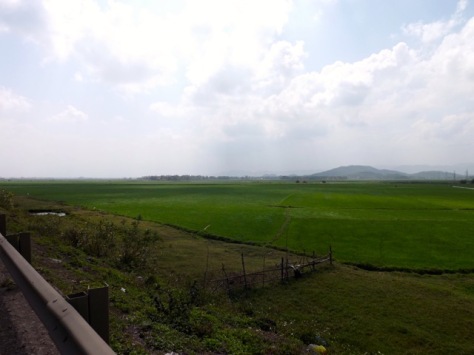 Quy Nhon is an industrial city littered with large car dealerships and malls. It was nice to find a decent supermarket to stock up on some needed items.

Day 16 – Quy Nhon to Nha Trang – 218km
This morning I woke to find my back tyre flat, so after finding coffee, I located a mechanic to replace my entire rear tyre. With that fixed, I headed off, but when I stopped to take a photo 5 km along the highway, the bike wouldn’t start again. The starter motor cable had sheered off so I jury rigged it and headed back to the mechanic who fixed it for free.

Today the AH1 followed the mountainous coastline and in the sunshine there were many beautiful views.

Unfortunately, when I arrived at the hostel, I discovered that the screen of my new macbook had cracked. With the ongoing issues with my scooter and damage to other pieces of my equipment, this adventure is starting to be an expensive one. While I have enjoyed many parts of it, I’m starting to look forward to it being over.

Nah Trang is a resort city on the sea. With direct flights from Moscow, it’s very popular with Russian holiday makers especially during the Russian winter. While it’s warmer here it’s not hot enough for me to consider it beach weather, but the many tourists used to cooler climates seemed to enjoy it immensely.

Like most larger Vietnamese cities, the streets of Nha Trang are crazy with motorbikes flowing everywhere. I rode around the city in search of some of its sights and found the Nha Trang Cathedral, a neo-Gothic structure built by the French in 1933.

Then on the north side of the city I found the Po Nagar Towers. The temple complex was built over 1,200 years ago by the Cham people, the civilisation that preceded Vietnam. The towers were part of a temple dedicated to the goddess of the country, which encompassing much of what is now Vietnam, Cambodia and southern Laos.

For the final part of my journey – Hanoi to Ho Chi Minh City by Scooter Part 4 – I head back into the Central Highlands then along southern beaches to Vietnam’s largest city.