As we had walked a mile past St. Just the night before to the YHA, we were already a mile ahead of schedule for the day. After breakfast, we checked out and headed along the gully to Gribba Point with a view back along the coast to Cape Cornwall. Ahead of us, the coastline stretched away as the trail cut across the cliff tops and only descended into a river gully once.

We climbed our way back up the cliff and around to the rocky Aire Point with White Sand Bay growing ever closer.

Beyond Aire Point, the trail grew more sandy as we came down into Whitesand Bay with Sennon Cove settlement on the far side where we aimed to find lunch. We watched surfers in the bay as you crossed a small amount of sand before climbing around the cliffs towards the town. On arrival, I found a fish and chip shop and a pub to enjoy a relax and an ice cold cider. 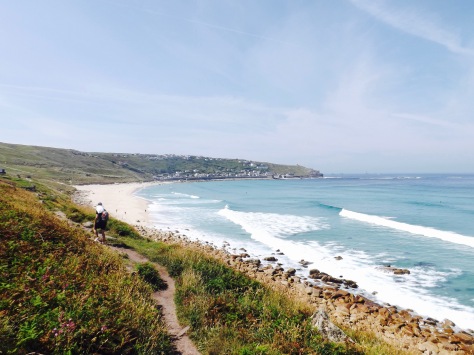 After lunch, we headed up the cliff and the final kilometre to Land’s End, the westernmost point of England’s mainland. We walked briefly through Legendary Land’s End, a tourist mall, before pushing on in the heat.

The way around the coast was mainly across the tops of the cliffs with only one climb down into Mill Bay and back up the other side. From here it was rolling hills all the way around to Gwennap Head, the southernmost point of the Land’s End peninsula.

We stopped for a break at the lookout at Hella Point before climbing down into Porthgwarra, a small village with a beach nestled in the rocks. 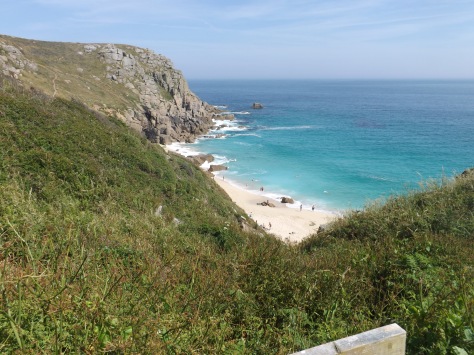 Further on we were warned of a cliff slide near St. Levan, so walked cautiously but found nothing of concern. We could soon see Logan Rock ahead, our end point for day 3.

We came to the top of the cliff over looking Porthcurno beach where there is a natural Open Air Theatre, but after a long day in the sun, neither of us felt like paying the money and lugging out bags up and down the cliff to see it.

At the top of the cliff on the other side of the beach, it was only a fifteen-minute walk to our accommodation, Treen House B&B and its host, the lovely Claire.

Treen House B&B is only 50 metres from the local pub, but up a hill. After the day’s walk, it was perhaps the hardest walk we had to make.

Day 4 – Treen to Penzance
The initial part is ‘difficult’, going quickly to moderate, before ending on an easy walk along roads.

We left the lush comfort of the Treen B&B and walked along the road down to Penberth. As it had for the previous three days, the sun beat down with only a soft breeze to cool us as we climbed one of the few cliffs left on this coastal adventure. We descended into a gully, ascended the other side to walk along the cliff and then down towards the community of St. Loy Farm, where we finally had some shelter from the sun through a small tree reserve.

Past the community, we had to for the first time rock hop along a beach for about fifty metres before heading up Boscawen cliff on the other side.

For the rest of the morning, we walked along the tops of the cliffs on a fairly easy route towards Lamorna where we came around the cliff to find a cosy little village nestled into an inlet. The heat was pretty sweltering, so we stopped off for lunch and a cold drink. We then continued around a rocky cliff, up Kemyel Cliff and passed alongside the Kenyel Crease Nature Reserve where we started to see more civilisation.

We hit roads not long after at the township of Mousehole only a handful of miles around the coast from Penzance. The remainder of the walk had us following the main highway along the coast. We stopped for an ice-block to cool us down before pushing on. Many people catch a taxi or bus from Mousehole as it is all road walking, but we decided to finish on foot. The concrete under our feet was hot, and you could feel it through your boots as we pounded the pavement.

After an hour on the road, we finally made it back to our accommodation in Penzance and dropping out bags off at the car, we headed to the local pub for a well-deserved cider.

Overall
The four-day hike from St. Ives to Penzance is an excellent and moderately difficult walk, made harder by the beating sun at this time of the year. It’s an experience and finding the little hidden away golden beaches and peacefulness of the trail, it was overall a good time. At no point would I have considered it severe difficulty as I have seen mentioned online, and only barely strenuous because of the constant heat.