In the mid afternoon of Day 1 we boarded the Plancius, a converted Dutch naval boat that’s been taking expeditions to both the Antarctic and Arctic regions for the past 9 years.

Once settled in out rooms, we set sail along the Beagle Channel with the glorious Patagonian mountain ranges along either side.  Before dinner we were called to the main common area where we took part in the mandatory safety lecture and trial evacuation.

Dinner was then served in the dining hall with a preset menu, which was brought to the tables by the wait staff. All onboard meals were three courses, including breakfast, but with the lack of gym facilities, we figured we’re all going to be putting on weight by the end of the voyage. The seas were calm and outside it was cold. Thankfully the agency I’d booked through had supplied warm clothing for the trip. As we ate our first whale was spotted, a sperm whale. Then as dinner finished we passed the last signs of civilisation, Puerto Williams, Chile.

The boat wasn’t large but then it wasn’t small either. There’s the main common room/ forward observing deck/bar, where many lectures were held, and then two floors down and towards the rear is the dining hall. There are plenty of outdoor areas, but did I mention it’s rather cold out? This meant when there was a lecture, the only place to comfortably hang out was in your cabin. Mine was a twin share room.  But for the most part we all went to the lectures.

Sleep was difficult during the first night not because of the constant listing of the boat, of which there was little, but that the blankets on the beds were overly hot. But without then it became too cold. It took some adjusting.

We were warned that the thousand kilometre, 2-day journey across the Drake Passage was often subject to high winds and rough seas, but on Day 2 we are blessed with a beautiful clear day and calm seas. Most of us were using sea sickness patches or tablets just in case. 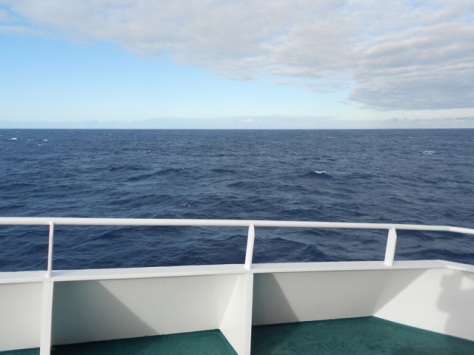 That morning we attended two lectures, one identifying the seabirds of the south we’d likely encounter and the other about why the weather is like it is in the Antarctic. The lectures were interesting and gave us something to do other than sit watching the expansive ocean go by.

After a three course lunch, including two massive trays of cheese, we relaxed in the common room playing card games and socializing until the afternoon lecture. The expedition leader announced that due to the good weather we’d be arriving in Antarctic waters 12 hours early, and would be going ashore on the South Shetland Islands the following afternoon. While the Islands are considered part of Antarctica, they’re still a distance from the Antarctic Peninsula.

During our wakeup call on the 3rd morning, we were alerted to a large iceberg floating past the port side of the ship.  While it wasn’t close, it was the first evidence of the great white land to come.

It had been cloudy overnight, but would turn out to be another fabulous day in the Drake Passage, we even spied whales swimming beside us.

As was suggested, because of the good weather we were on target to arrive at the Shetland Islands 12 hours early.  By late morning we began to see the icy cliffs of an Antarctic Island ahead of us.

As the hours passed, the white landmass grew along with the number of icebergs.  We began to see rocky islands, dispelling the idea that Antarctica is just a land of ice. 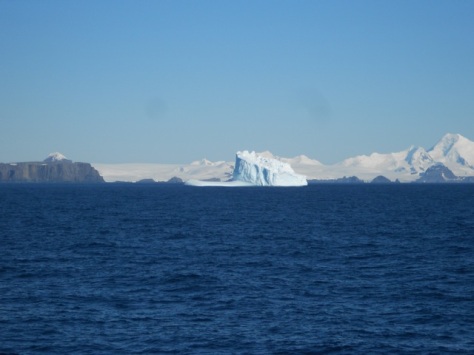 We started to see signs of wildlife including the Giant Petrels with their 2 metre wingspan, and other birds mentioned in the lectures. There were occasional sightings of fur seals and more whales. 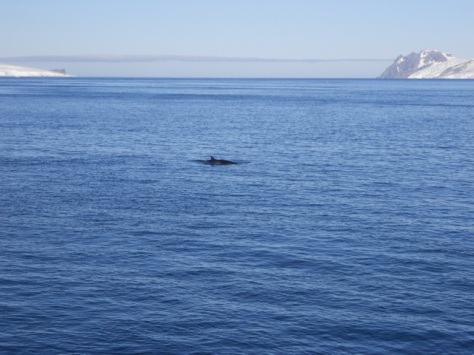 But it was the penguins that stole our attentions. While we’ve all seen them on land, they swim like nothing we’d seen before, skipping gracefully out of the water for breath every few moments before darting off again at amazing speeds once back in the water.

We passed many small rocky islands and icebergs before nearing our first landfall site, Barrientos Island.

After a briefing, we dressed in out cold weather clothing and got into the Zodiacs that would deliver us to island.

Barrientos Island is a penguin colony with two different breeds of Penguin, the white-faced Chinstrap penguins … 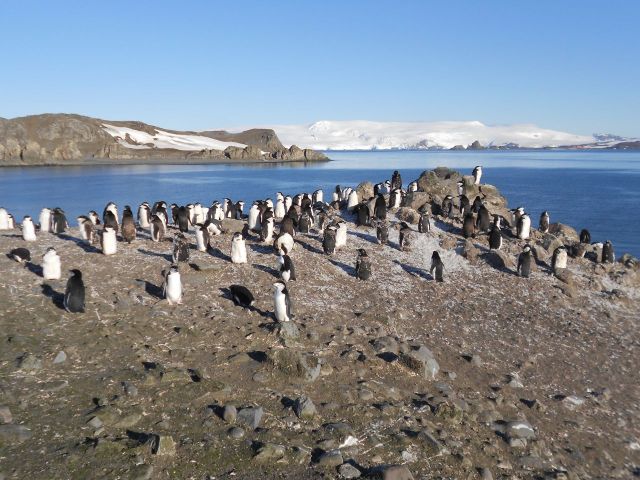 …and the red beaked Gentoo penguins.

While on the island, we saw many different penguin behaviours and learnt a lot about them in a short period time. They have little fear of humans, often coming up to peck at our boots. There were plentiful of young learning to swim in the shallows, moulting out of the fluffy grey fur or being weaned off being fed by the parents.  The weaning process is called the ‘feed chase’, where the parent just runs away when the young comes to feed.  The youngster usually takes up a grand chase through the colony until the parent eventually gives in or more commonly escapes into the ocean, forcing the young to fend for itself.

All over the islands are strange white lines, sometimes several splaying out from one spot. It looks like someone has crazily marked the rock with chalk, but it’s actually squirt lines. The penguins lift their tails and squirt in a line up to half a metre in length.

After a couple of hours Zodiacs delivered us  back to the Plansius in time for dinner after which we settled in for more socializing and card games.

…shining pink across the ice.

Next, we’re off Along The Great White Peninsula.