Ica is a small city in central Peru about 300 km south of the capital, Lima. Ica lies at the top of the Atacama desert that stretches south for over 1000 km into northern Chile. It’s the driest hot desert in the world (Antarctica is the driest cold desert), with parts receiving only 1 mm rainfall a year. The fact that Ica is in the desert is very obvious because it’s surrounded by massive sand dunes.

As a size reference, that small black shape near the top is a dune buggy designed to carry 12 people… 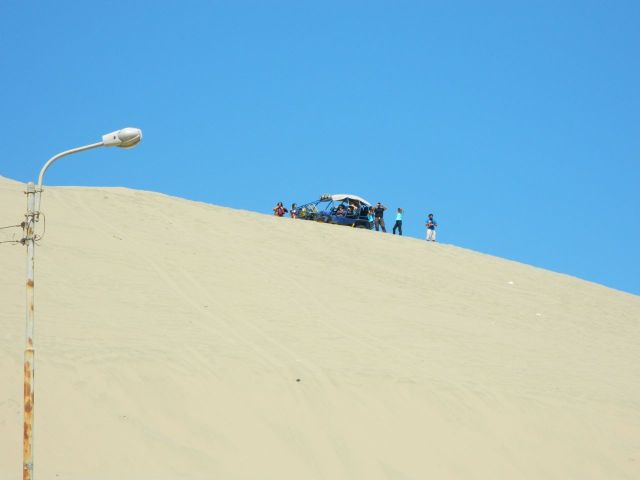 While Ica doesn’t have that much to offer the tourist, just west of the city is a place called the Huacachina Oasis (pronounced waka-chee-na). The oasis is literally a large pond surrounded by the massive sand dunes. 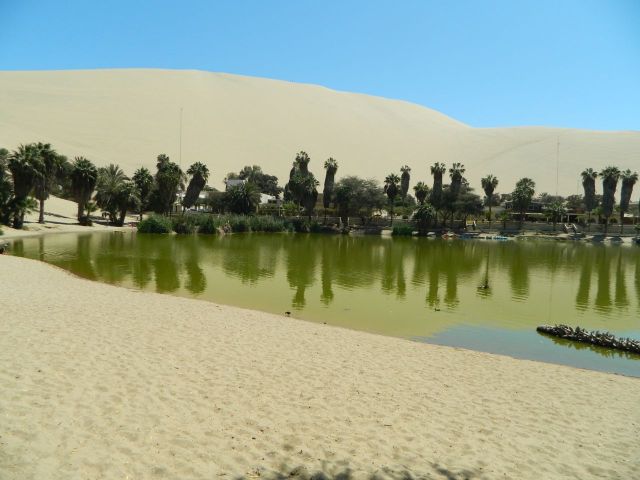 A very small township has been built in a horseshoe in the gaps between the dunes and the pond; with hotels, hostels, bars, clubs and restaurants – the most popular being The Huacafuckingchina.

After arriving, checking into my hostel and having breakfast, I went for a walk around the pond. Five minutes later, I was back after having seen most of the town. So, I decided to take a ride across the pond on a pedal boat with a friend from the hostel.

That killed another half an hour and while getting out of the boat at the end, I managed to drop my camera into the water. BUGGER! Guess I’ll be buying a new camera when I get to Lima… So, that ended my ability to take photos. Pictures from here on aren’t mine.

In the afternoon, I booked in for what most people come here to do… Sand boarding. Late in the afternoon, ten of us piled into dune buggy with the driver and drove madly across the dunes (madly is the only way possible on these sand dunes!) skidding and bouncing around before stopping at the top of a large dune.

For those that had previously snow boarded are able to sand board standing up, while the rest of us went down on our bellies.

The buggy then picked us up at the bottom and shot us off to another, taller and steeper dune; each one growing more and more intense. It was exhilarating to say the least, but two hours goes past far too quickly…

While the sand boarding is fairly inexpensive, hiring quad-bikes and touring the dunes is far more expensive. Beyond that, there’s not much to do and staying longer than a day leaves you to just sunbathe, if that’s your thing. Early the next morning, I caught the bus to Lima.

After a few days in Lima, I plan to travel to Huarez to do some hiking in the Cordillera Blanca – the White Mountains.

One thought on “Ica and the Huacachina Oasis, Central Peru”