This week I am in Snowdonia National Park, Northern Wales. But, instead of doing a grand circuit, as I usually do, I have three separate day-walks at the northern end of the national park.

Today, I merged two smaller walks into one longer one to give me a full day of walking.

The first walk of the day, to the Aber Falls, is probably one of the easier walks in Snowdonia. It is also a popular tourist walk, so I was expecting plenty of families.

I headed out from the cafe in the brilliant midday sun, along a short path to a road and on the small village roads for about a kilometre to the Aber Falls carpark. As I had expected, the carpark was full, and from what I could tell, there was another carpark nearby which was the same. As my goal is to get away from people and get into the wilderness, I quick marched along the wide shingle and dirt trail, passing picnic benches and groups of families hanging out in the sun.

With temperatures in the high 30s back in London, I was glad it was cooler up here, although it was still set to be a scorcher of a day in the mid-20s. I marched quickly along the trail passing through small clumps of trees on a path that rose gently yet remained flat enough for wheelchairs. 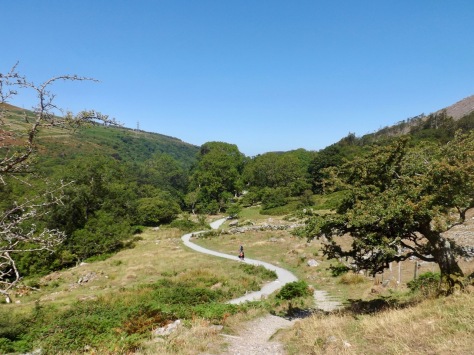 After another kilometre and a half, I finally climbed a rise and saw the thin ribbon waterfall. It has been hot and dry for many weeks here in the UK, so the waterfall was less than it should be. 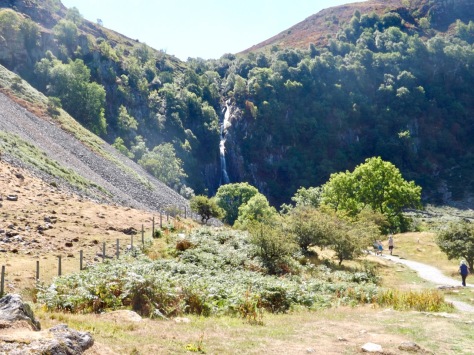 I walked on for several minutes until I came to the base of the falls. Groups of people sat along the stream leading away from the falls, enjoying the weather and cool water. When I got to the base, I climbed to the far side for a closer look. Unfortunately, because the sun was right above the cliffs, it was impossible to get a good photo of the entire waterfall. 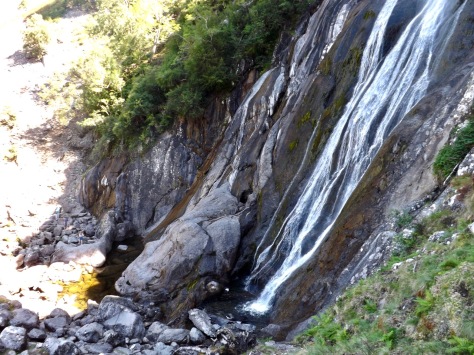 Then after a few minutes rest in the shade, I quick marched my way back along the trail, stopping to chat briefly to an older gentleman in a mobility scooter before arriving back at the car park.

From the Aber Falls car park, I walked along a sometimes steep thin road for 2 km until I came to another carpark, this one empty. An empty car park is a good sign, there will be few people on the trail. I rested for lunch on a large rock in the sun as there was no shelter. Above me was the colourful peak of Foel Dduartl, my return trail obvious across its front.

I climbed a rocky trail for several hundred metres towards a set of power lines and a rock fence. I cut right at the North Wales Path and followed the power lines steadily uphill. The peaks of Foel Dduartl and Foel Ganol to my right were emblazoned with autumn colours even though it felt most decidedly summer.

The path continued steadily uphill for more than a kilometre under the power lines. If it were not for those power lines, it would feel decidedly wilderness. Close enough for me.

Off to my left, as I climbed, the Irish Sea in all its blueness.

After 2km, I turned right onto a wide and easy trail that again continued the long climb this time fairly directly to Drum (pronounced Drim) in the distance. Here I passed the only other walker I would see on this trail. I headed further on the trail as it grew steeper but nothing too strenuous, the sun beating down on me as I walked. To my right, the Llyn Anafon reservoir. 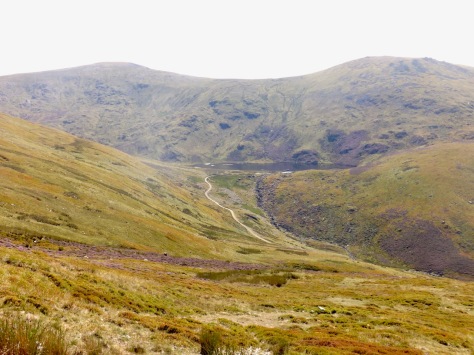 While an open sky is excellent for views, the sun is not your friend on a summer hike. The direct sunlight can be draining, and today was no exception. As I neared the summit of Drum, the trail grew steeper, and I had to push myself step after step to climb higher. Eventually, I made it to the top and stared back at the valley below, the Irish Sea beyond.

I crossed a ladder stile and took in the view from the other side of Drum down to the sea. 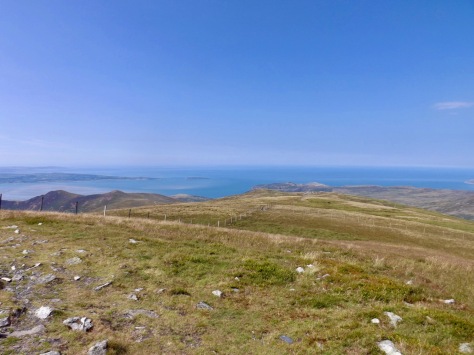 At the top is a round cairn shelter, although it didn’t look like a pleasant place to sit in the heat. So I found a soft grassy patch on the far side and lay down for a ten-minute nap.

When I got up again, I was besieged by a horde of flies which seemed to buzz around behind me. I flapped them away as best I could, but they kept returning. So, I donned my pack and hat, crossed the ladder stile and headed off.

The initial part of my return hike did not actually follow a trail down the hill, but simply struck off down towards Llyn Anafon reservoir, aiming for the broad service track. Thankfully from the dry weather, the ground was not soggy. I edged my way down the side of the hill for several hundred metres, zigzagging back and forth to avoid sheep until I eventually arrived at the lake. 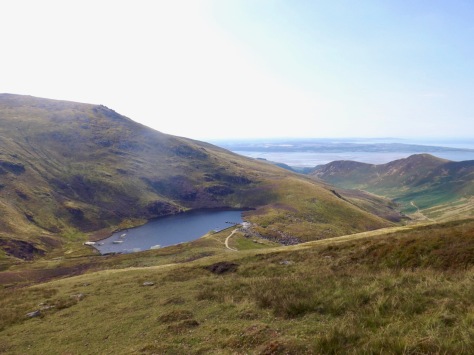 My descent from there was fairly steady, following the outlet of the reservoir – Afon Anafon – beneath the peaks I had climbed on the way up. The colours still stood out as I went, almost fading from deep green to the autumn colours as I headed towards the base of Foel Dduartl. 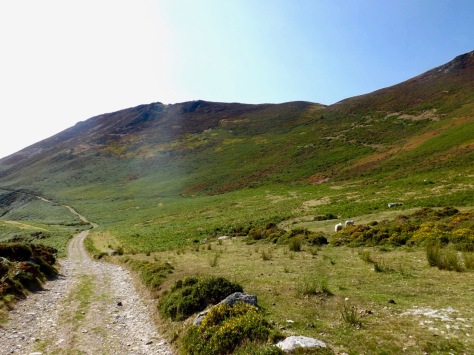 And then it was onto the blue of the Irish Sea again as I rounded the base of the peak and returned to the empty carpark. I stopped for a brief rest before marching the 3km back to the bus stop at Abergwyngregyn. Then it was back to Bangor, where I made my way to the local Wetherspoons for a well-deserved cider.

Overall, the Aber Falls and Drum were a good pair of walks to add together on a sun-drenched day. Tomorrow, I head by bus to Llanberis and do a smaller local circuit before my group arrives to climb Snowdon.