This morning I packed up the little room I’d been staying in at Bangor University and headed for the bus stop for the  45 minutes ride to Llanberis (pronounced Clanberis). But I was late for the direct bus, so ended up finding an alternative route via Caernarfon. I arrived in Llanberis to find a classic adventure town with many adventure stores, pubs and cafes. I stopped off for lunch and read up on the today’s hike – Moel Eilio. 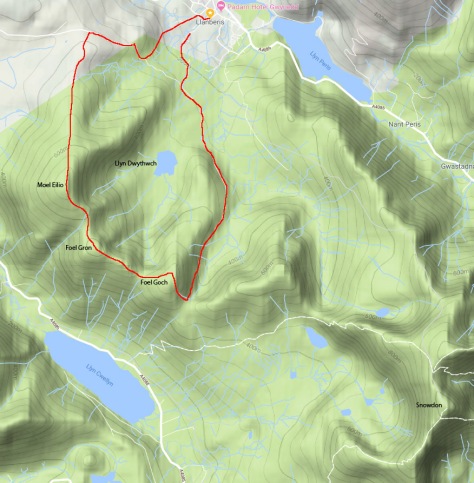 After a coffee, I headed out and up a road near the hostel I’d be staying at later that evening. I followed a road up to the left and after a short climb stopped to take a photo of Snowdon, covered in clouds on the centre right of the below photo. 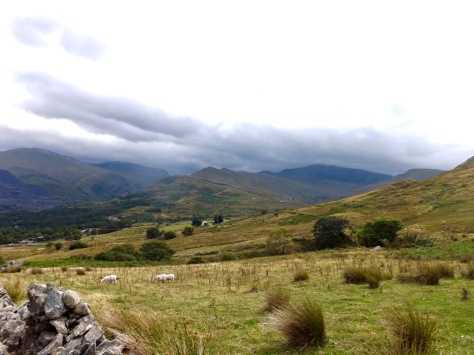 The road ended at a series of ruined stone houses. I climbed a ladder-stile and heading up into grassy fields with small groups of sheep. I walked along a vehicle track, called Bwlch y Groes, as it rose towards some disused quarries. From here there are great views down on Lyn Padarn (the lake beside Llanberis), the adventure town hidden by the small mound of Ty n y Mynydd. You have to love these Welsh names. 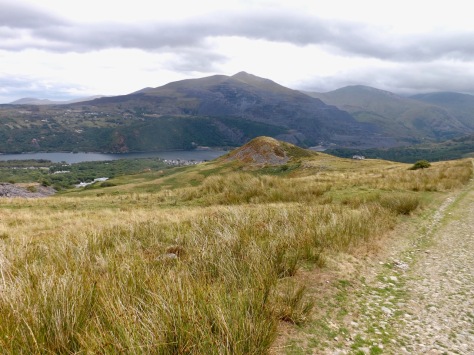 Near here there was once an old Iron Age settlement and a hill fort, but little remained of either. The other end of Lyn Padarn. 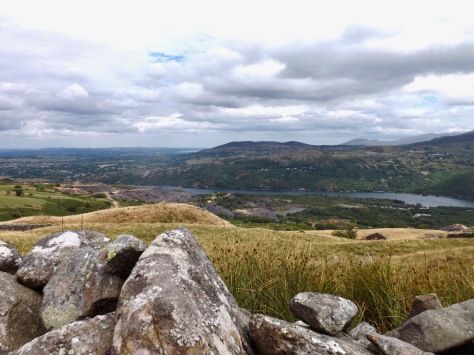 I then peered at the peak of Moel Eilio up ahead, still a decent climb away and plodded on. 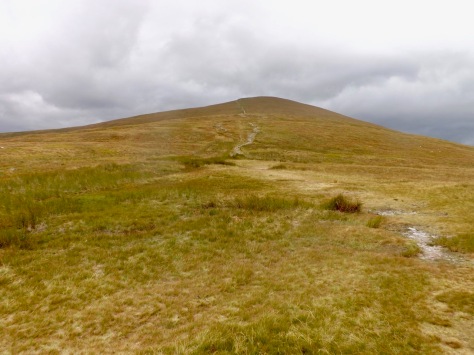 From a distance, Moel Eilio does not look very steep, but as I grew closer, the main peak pushed up ahead. I stopped at the base for a brief rest and saw the only other walker I had seen so far. I began the steep climb, pausing here and there for a quick breather before continuing. About halfway up the steep climb, it started to rain. This pushed me to get to the top as quickly as I could, which was now covered in low clouds. When I got to the top, the rain was coming harder, and I found a stone shelter similar to that which I had seen at the top of the Drum the day before, although the walls of this one were taller. As the rain seemed to be blown across the top of Moel Eilio, when I ducked into the roofless shelter, I was fairly well protected from it. 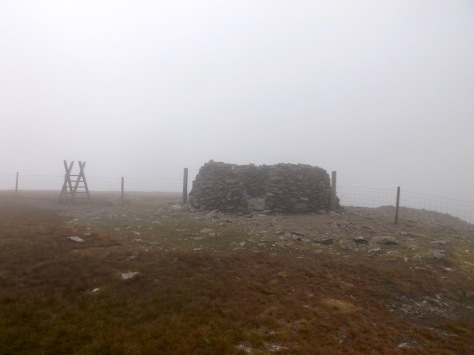 I sat for a while to wait out the rain and to rest. But when it didn’t seem ready to stop anytime soon, I decided to push on and hope at lower altitudes it would clear up. In the mist, I followed the trail to the edge of the peak and down the other side. It did not take long to come out of the cloud and to see the path crossing more hills ahead, one unnamed and two others, Foel Gron and Foel Goch, in the distance. 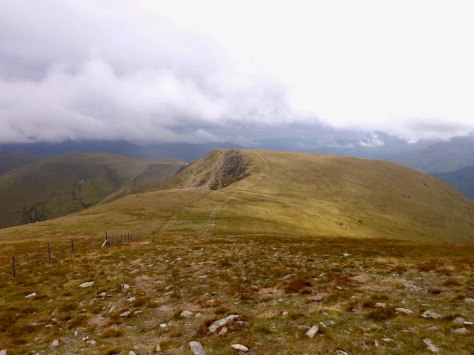 As I climbed down, off to my right, I could see the Menai Straight splitting the island of Anglesea from the Welsh mainland, its mouth opening into the Irish Sea. 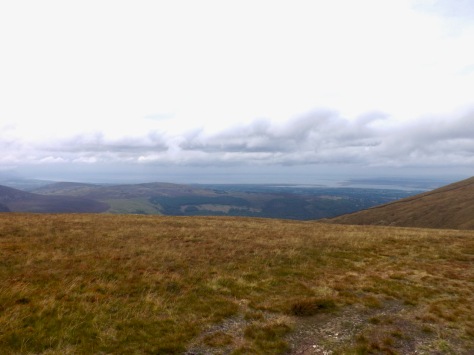 Then from the top of the unnamed hill, I got a better look along the valley to Llanberis and Llyn Padarn, with the smaller Llyn Dwythwch at the base of the hills. I continued on up Foel Gron, a fair climb but nothing too strenuous. 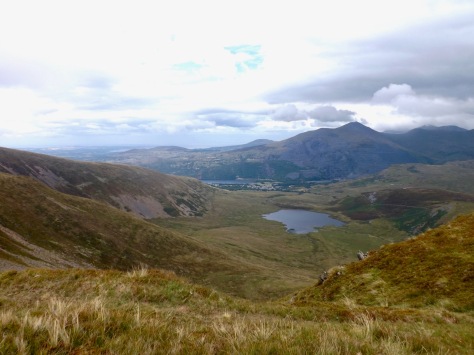 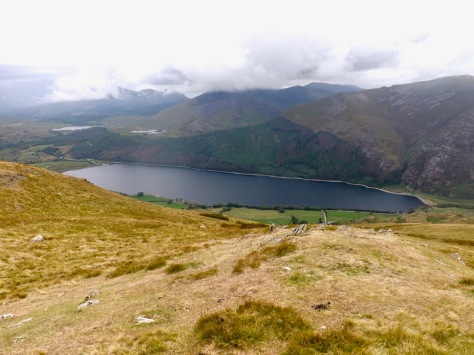 The final climb up Foel Goch gave great retrospective views across at Moel Eilio, now no longer covered in cloud. 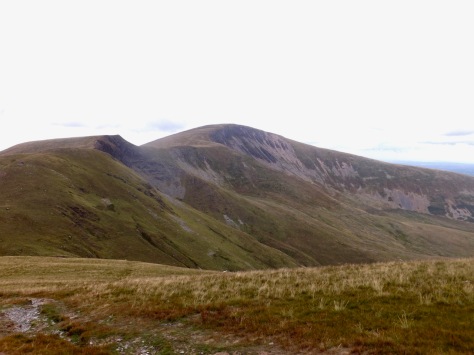 The trail then cut steeply down a trail to the fairly pronounced Ranger Trail. I made my way deftly down the steep hill to eventually arrive at the Ranger Trail where I passed a French man who was heading to Llanberis. 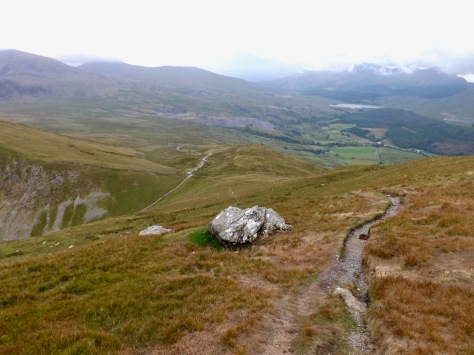 I followed the trail for four kilometres along the side of the valley. But after ten minutes or so, it began to rain. So, on went, the pack cover and I marched on to finally arrive soaked and ready for a shower. 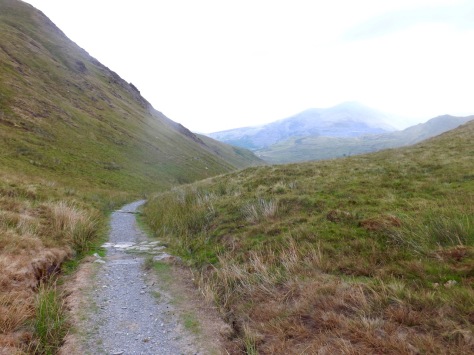 Other than the two spots of rain during the walk, the Moel Eilio could be described as a hidden gem. It is not as high as many of the mountain walks around it, but still had plenty of excellent views, began and finished at Llanberis, and was mostly empty, with tourists opting for the larger Snowdon nearby.

After a shower, I drank a refreshing cider. Then once more of my group arrived, we headed down into Llanberis for dinner and a few more drinks.

Tomorrow, we hit up the big one. Snowdon.