After a 20 hour bus ride from Patagonia, I arrived in Mendoza, Central Argentina. Mendoza is a wine region and boasts some of the best red wines in the world. While I wasn’t the biggest fan of red wine before, after my time in the city I was a Malbec convert. One of the fun things I did while in the City of Steak and Red Wine was to spend the day enjoying some aguas calientes, a set of hot pools near the city. While this might seem strange for a desert city, it was amazing and included a huge buffet lunch.

Around Mendoza are several wine areas and the best way to see them is via bicycle tours. The wine was delicious and cycling around the area after many glasses of wine was both crazy and fun at the same time.

Beyond the vineyards, the tallest mountain of the Andes, Aconcagua. 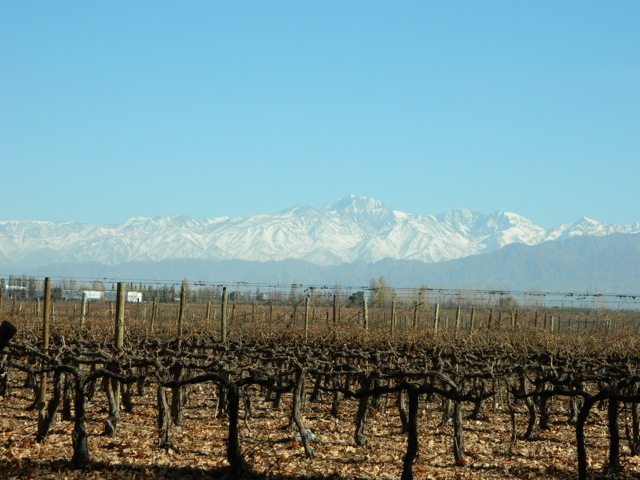 Next I caught a bus across Argentina to Cordoba, the country’s second largest city. While staying in the city I got out-of-town to Parque Nacional Quebrada del Condorito – Condor Gorge National Park – for a long day walk in the heat.

Next I headed to the Buenos Aires and stayed in a different area of the capital from the beginning of my trip. As I knew I was heading back to the city, I made contact with a friend of a friend and organised to hang out with him and his friends while I was in the city. They were very friendly and I stayed in the city over two weeks to spend time with them.

During my stay in Buenos Aires, I caught a ferry across the river to the Uruguayan city of Colonia. While I could have stayed in Uruguay longer I was happy to see the more expensive country for the day and get the stamp in my passport. I enjoyed learning about the city and the country in a guided tour.

I then bused headed north for my final Argentinian destination, Puerto Iguazú. While the township was very touristy, it had good reason, Iguazú Falls is one of the more popularly visited places in the region. While it had been raining the day I visited the Argentinean side of the falls they were still like nothing I’d seen before. I even took a boat to get right up close to the spraying water.

The following day, I took a bus across the border to the Brazilian side – Iguaçu Falls. While it’s the same set of falls, it’s a totally different sight and you get closer to the Devil’s Throat, a formation of rock that water pours into from three sides. Both Argentinian and Brazilian sides are a must see if travelling to this end of the world. It was then back across the border to Argentina for a final night before booking a bus to Rio de Janiero.

After a 24 hour bus ride to Rio de Janeiro – the longest trip in a bus I would take – I found the city to be dirtier than expected. It also gave me a sense of danger I hadn’t experienced in either Argentina or Chile. I’d booked a cheap hostel near the location of Carnival and it turned out to be the smallest hostel I’ve ever stayed in, squeezing 18 people into the space most hostels would fit 6. It also only had one bathroom.

The hostel aside, the natural wonders of Rio were amazing. I visited Christ the Redeemer, Sugarloaf Mountain and took a bicycle ride along both Ipanema and Copacobana beaches.

I then took my second 24 hour bus ride to a city called Campo Grande in western Brazil for an overnight tour through Brazil’s Pantanal. The Pantanal is a vast swampy area south of the Amazon. It’s similar to the jungle in many ways, just without the trees. We spent the night on the border of Brazil and Paraguay (the closest I would get to the landlocked country). On arrival we ate Piranha, the mean looking faces leering up at us from the pot. The next morning, we took a boat trip along the river to fish for more Piranha…

…and to see Caimans, smaller cousins of Alligators.

Then it was over the border and into Bolivia. As soon as you enter it’s obvious that Bolivia is the poorest country on the continent. The roads are bad, the towns are dirty and the buses are owner operated family affairs and include the kids running up and down the aisles while badly dubbed Steven Segal movies are blasted very loudly. My first stop was the city of Santa Cruz, where I stayed at a brand new hostel for a couple of days before heading on to La Paz.

La Paz is a bustling city high in the Andes and when I arrived my head was exploding from the altitude. It only took a good night’s sleep to recover, thankfully. While the entirety of La Paz is terracotta in colour it grows on you as you explore the city centre and beyond. The lights at night are amazing up the walls of the bowl the city is built in.

Using La Paz as a base, I had many adventures in Bolivia. For a start, you can’t come to the city without hearing about or doing Death Road. Death Road is a crazy stretch of dirt road 65km long and famous for the cliffs on one side with no barriers. It gets its name from the people who have plummeted to their deaths from it. Riding down it on a bike is one of the most thrilling and fun things I’ve done on this trip. 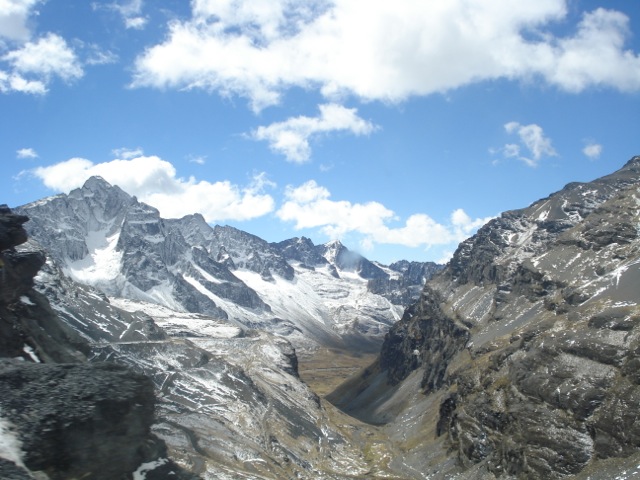 Next I hiked along an alternative route to Death Road called El Choro, through cloud forests and past my first Incan ruins. During the hike I climbed to the highest I have ever hiked, 4900m, and at that altitude the climb was intense and difficult. It was a great hike and also my first with a guide. Not something I relish, preferring to carry all of my own gear and cook my own meals.

Then I caught a bus to Uyuni for a 3 day tour around the Salt Flats and along the Andean High Plains to the three-way border of Bolivia, Argentina and Chile. The Salt Flats are like an inland sea without the water.

There were so many different terrains on the high plains and many stunning views. We visited some very interesting places, like the lodge made entirely from blocks of salt where we stayed on the first night. Views across Lago Roja – Red Lake. 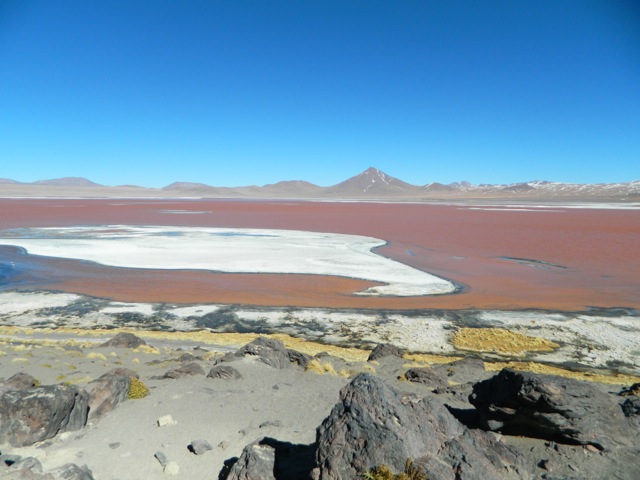 Then it was back to La Paz where I managed to suffer from food poisoning, an illness everyone seems to get in Bolivia. Don’t trust the street food! For my final days in Bolivia, I caught the bus up to Lake Titicaca, the highest navigable lake in the world. After a day tour to Isla del Sol, I booked a bus into Peru…

Next, Part 3 of my Look Back Series where I complete my time in South America by working my way to Colombia.