With an official end date to my Latin American adventures quickly approaching I’ve had to make some hard decisions. One of these was to only spend a week in Costa Rica, this being on the basis that it’s the most expensive country in Central America.

From David in Panama, I caught a bus to Costa Rica’s capital, San Jose. The bus ride was around eight hours including the border crossing, which wasn’t as stressful as I was led to believe. Like Panama, when entering the country ‘proof of exit’ is required. This time I had a fake booking set up but was not asked for it.

San Jose isn’t as influenced by the US as Panama City is, and since my plan was to stay in the city only two nights I didn’t spend a lot of time exploring the city beyond finding a restaurant and a supermarket. This still took me past a municipal building.

Soon after arriving, I arranged for a full day tour to see as much as I could in the short time I was here. I confirmed the time of pick up and was prepared for the early start. The next morning the tour operator arrived 30 minutes early and when I wasn’t ready, left without me. This led me to wonder if I’d heard the wrong time. When the staff member at the hostel arrived for the morning, he confirmed that I had been correct and set about getting my money back. He booked me on another tour for the following day, a cheaper one, with the difference in price covering the cost of another night in the hostel.

The next morning the tour operator arrived at the correct time and we were off. First stop was the ruins of the Temple of the Santiago Apostle Parish. The building of the temple began in 1870 but stalled after an earthquake destroyed part of it. Building again began several years later but again stalled because of another earthquake. This happened several times over the course of 40 years until in 1910 when it was decreed that God didn’t wish the temple built and construction was abandoned. 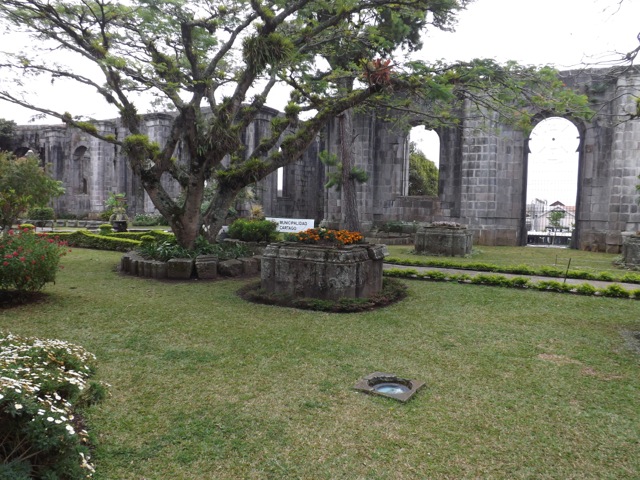 Our next stop was Volcán Irazú, the tallest active volcano in Costa Rica. As we drove to the top, the cone was shrouded in clouds so it was unclear if we’d be able to see much. At the top the crater was barely visible through the mist and we put on rain jackets to save getting wet. Like Volcán Barú in Panama, Volcán Irazú can sometimes give views of both the Pacific Ocean and the Caribbean Sea, but today was not one of those rare days. The clouds cleared enough after 10 minutes and we finally got to see the crater.

After the volcano visit, the tour headed to a restaurant for breakfast then north across the continental divide to the Caribbean side of the country. After a couple of hours in the bus we stopped at Rio Puerto Veijo and got on a river boat for a 90 minute cruise along the river.

On the trip we spied plentiful birds, including the rare Red Macaw – which are often poached and sold on the black market for US$30,000 each. We then encountered a lone Iguana sitting in the bushes on the side of the river… 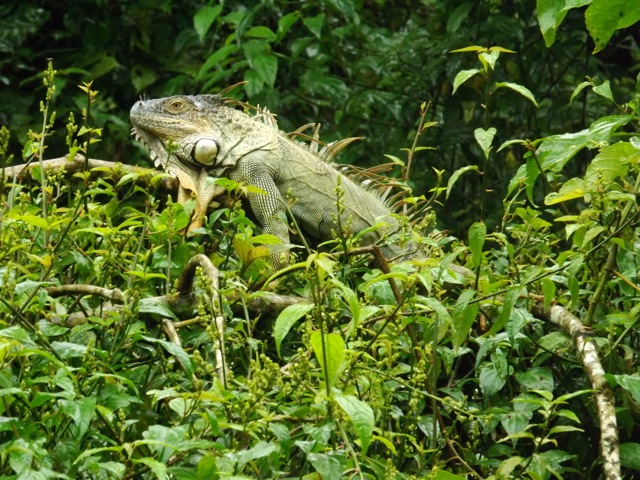 Then a lone Caiman about the length of my arm. Caimans have no ridges along their backs and are much smaller than their larger cousins… 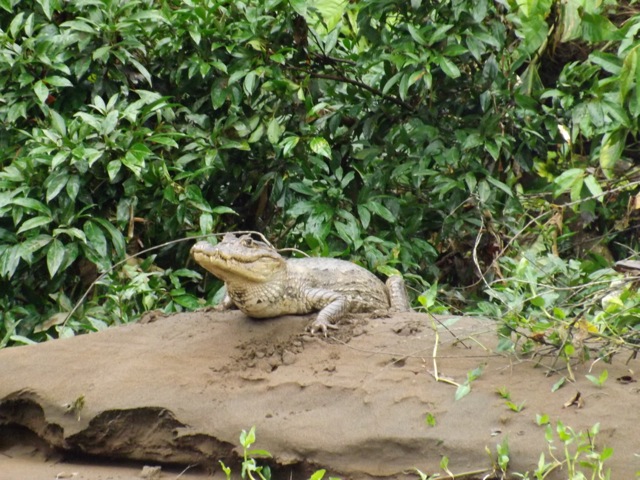 We heard several Howler Monkeys, although only caught glimpses in the trees. Then small camouflaged micro-bats on the trunk of a tree and lastly, Crocodiles. This one is about three metres long.

We then stopped at an animal sanctuary that houses poisonous frogs, an Asper snake and a butterfly conservatory. The poisonous frogs were the most interesting. There were two varieties, one black with luminous green spots about the size of your big toenail, and the other tiny and red about the size of your little fingernail. Their poison was used in blow guns by natives of Latin America. Lunch was a traditional Costa Rican meal but included Iguana, which like crocodile, tastes very like chicken. Then it was a 2 hour bus ride back to the hostel.

The following day, I caught a bus to the northern city of Liberia, a hub of tourism in Costa Rica. Like many Costa Rican cities, it has a more modern church… 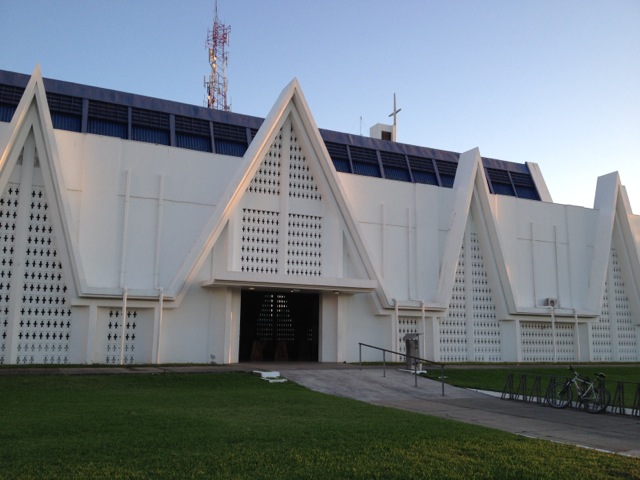 During the couple of days I stayed, I made my way to Playa del Coco – Coco Beach, which is a touristy beach town set on the Pacific Ocean. As much of Costa Rica is tropical, even in winter, I enjoyed a swim in the cool waters of the ocean.

For my last day in the country, I visited Llanos de Cortez waterfall where myself and three women from the hostel enjoyed swimming. This is just one of the many waterfalls in the area…

Next I head to the beach town of San Juan del Sur in southern Nicaragua.