Snowdon is the tallest mountain in Wales and of all the British Isles south of Scotland. At 1085m above sea level, it’s not really that tall, but with the sharp ridges leading to it having claimed many deaths over the years, its height is nothing to be scoffed at. However, while there are dangerous routes up it, there is also a tourist route directly from Llanberis, which is why it is a popular climb. So, today I will be climbing it with 35+ people from my Meetup.com group, plus, no doubt many others thinking of doing the same.

When I woke this morning it was raining, Murphy’s Law considering the UK has had pristine weather for the past two months.

After breakfast, we all congregated outside in the cold preparing mentally for the climb ahead. And once we were ready, we began up the road I had come down the day before. This allowed me to get a morning shot of Moel Eilio, the main peak from yesterday’s hike.

With a group this size, hiking becomes more of a social event, but I knew that would be the case before I signed up. With the wind buffeting us already, we continued to a gate on the side of the road and headed out across the slightly soggy grassy fields heading towards where the Snowdon train line meets its first stop. Ahead of us, Snowdon was ominously obscured by clouds.

Once across the tracks, we climbed up the Llanberis Trail, the tourist route mentioned earlier. This trail is wide and is mainly laid with large flat stones or shale rock. And, it is what I call ‘Disneyland’ when looking up (or down) the trail lines of people can be seen climbing as if they were waiting in line for a ride. Here, looking back along the trail after a brief rain, with the Czech girl who would become my hiking partner for the day. 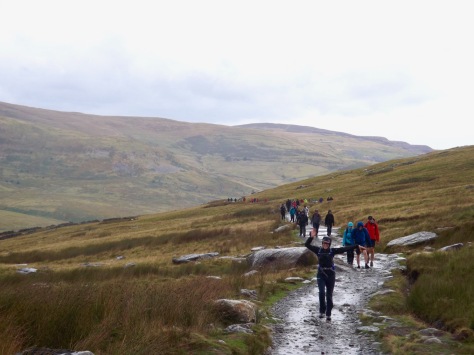 The climb was not difficult, with a steady climb from the beginning which can be progressed with a plodding walk. We fought the elements the entire time, with the wind gusting into our faces. We plugged away in our little groups along the trail, passing people both climbing and returning, including three walkers ‘driving’ RC 4x4s along the trail. We stopped briefly at Halfway House, a cafe at the midpoint of the walk, but it quickly grew cold, so we pushed on.

The next stage of the climb was more difficult, it began to rain briefly but thankfully not for long. The wind, however, seemed to pick up, tearing at our clothing, but we plodded on. People came and went from my small group, but my Czech walking partner and I kept pace. The climb grew steeper and colder as we went, but we pushed on at speed, the cold and howling wind winning over our slowly tiring legs. We pushed up past Clogwyn Station, the last train station before Summit Station, and looked out along a flat area with the small lake of Llyn Du r Arddu just hidden from our view.

The wind picked up again as did the steepness, and at one point, the Czech girl, another girl and I formed a human chain so as not to be torn from the mountain. We pushed on and finally gained the top of the steep section, and under a thin train bridge. On the other side, there was some respite from the wind and good views along a valley called Cwm Glas Bach before the cold pushed us to continue. 1800m to go.

The grade became the steepest it had been, clouds began flowing over us giving everything a foggy look. We pushed on, with great gusts of wind flowing over us and we were forced to stop each time we felt the large blast coming. The steepness gave up a little, and the trail flattened out, but the wind seemed to grow stronger. We trudged on as we reached 1000m above sea level and the trail continued between a set of ragged rocks and the train tracks. The wind was at torturous levels, and deep in the cloud, with no idea how much further the trail went, it felt like we were walking forever. We struggled on for the last few hundred metres and finally arrived at the summit. The last couple of metres of a climb to the very top, we virtually crawled these last couple of steps, I hung onto my Czech companion to ensure she did not fly away.

Near the top is the Summit Station with a cafe and gift store. When we entered, we found nearly a hundred people crammed inside the large area with an enormous window looking out to one side of the summit. We found a place to stand and ate the lunch the hostel had provided us. But as it was freezing even in the crowded room, we did not stay long and decided to head down again. 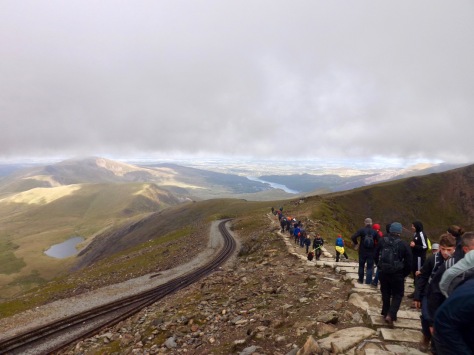 There are several ways down the mountain, and my walking partner and I decided to split from the group and follow the Ranger’s Trail. This cut beneath a range called the Clogwyn Coch and above the Lyyn Fyynnon-y-gwas reservoir. The trail led us down a rocky trail with the wind dragging us sideways, zig-zagging down towards this reservoir. There were fewer people on the path, so it felt more like being in the wilderness, and as we got to the bottom of the valley, the wind subsided, and we stopped for a rest.

For the next 2km, we walked along a flat trail in this beautiful setting, with few people, until we came to the trail I had walked along at the end of my hike yesterday. Then for the final 4km back to the hostel, we saw no-one. This allowed us to have a long chat about things while enjoying the remainder of the walk, and to top it off, the sun finally emerged from the clouds. 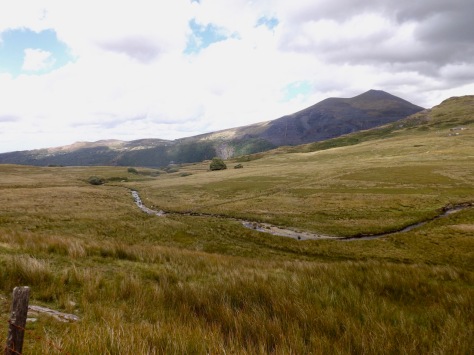 Overall, while it felt like a ‘Disneyland’ of a walk, it was still a hard slog all the way to the top, battling against the wind and occasional icy rain. Descending was easier and with good company, friendly conversation and amazing scenery, we arrived back at the hostel ready for showers and a relax.

Tomorrow, it’s back to London on the train.