As I left Bolivia I made my way around Lake Titicaca and along the Andes to Cusco, capital city of the Inca Empire more than 600 hundred years ago. Cusco was built in the image of the Puma, a holy symbol of the Incas. 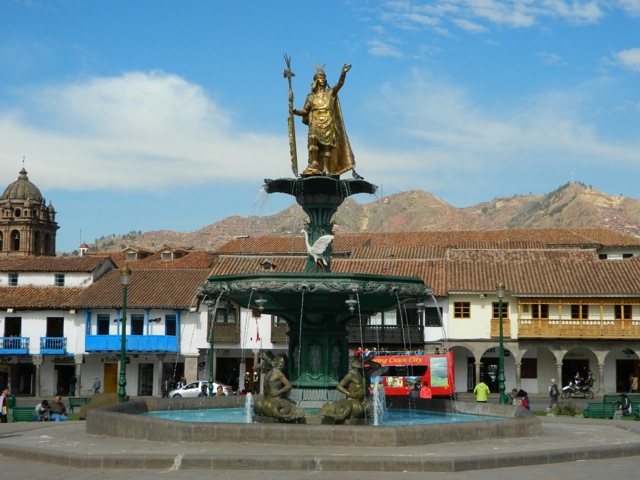 Cusco’s a popular tourist destination because of it’s closeness to Machu Picchu. To get to the ruins many people walk one of the expensive hikes in the region: the infamous Inca Trail, The Salkantay Trek or The Jungle Trek. While these hikes are said to be amazing, the expense and length of time needed to prebook put me off. Instead I caught the train to Aguas Caliente, the township at the base of Machu Picchu mountain, and climbed the near 2000 steps to the ruins. At altitude, these steps are still hard going. The ruins felt like Disneyland because of the huge number of tourists but it was still beautiful to behold… 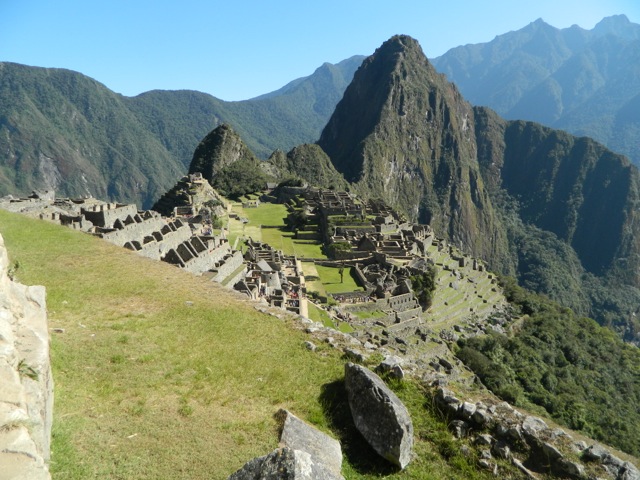 After Cusco, I travelled to the city of Arequipa, the southernmost city of Peru. Near Arequipa is the county’s third most popular destination, Colca Canyon. Colca Canyon is one of the largest canyon’s in the world, twice as deep as The Grand Canyon. The hiking there is very cheap and doesn’t require a guide. I explored the canyon for three days, including the final climb, a kilometre straight up. 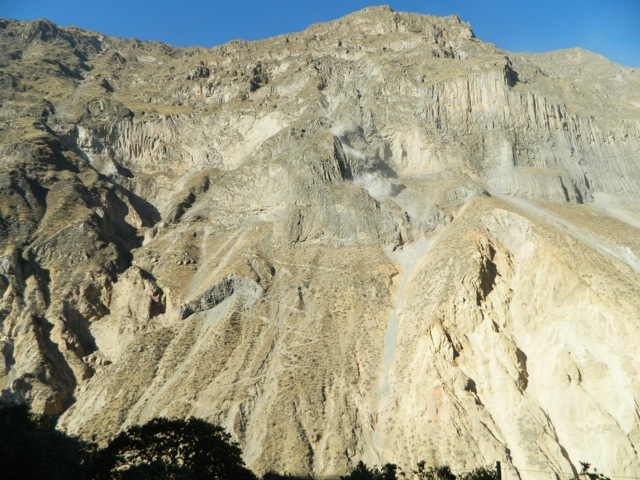 After Arequipa I headed down from the Andes for a time, stopping at Huacachina, a small town near the ocean renown for its massive sand dunes. I spent an afternoon sand boarding down the slopes. 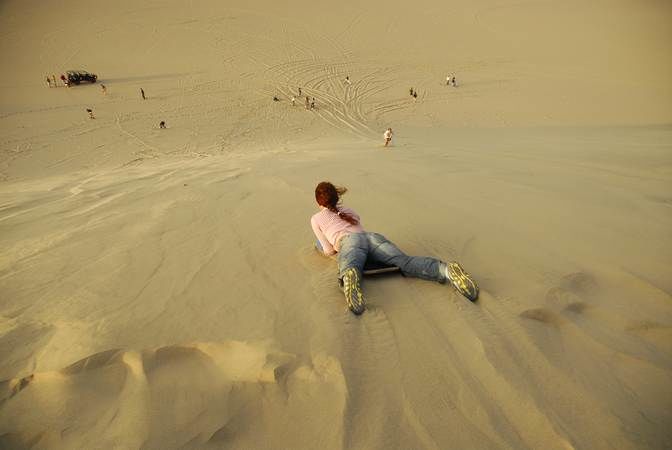 Next was a visit to the capital, Lima. I stayed in the tourist zone of Miraflores which felt like I was in the centre of any other city in the world. I then moved to the historical centre and this was more to my liking with great architecture and a distinct lack of tourists. 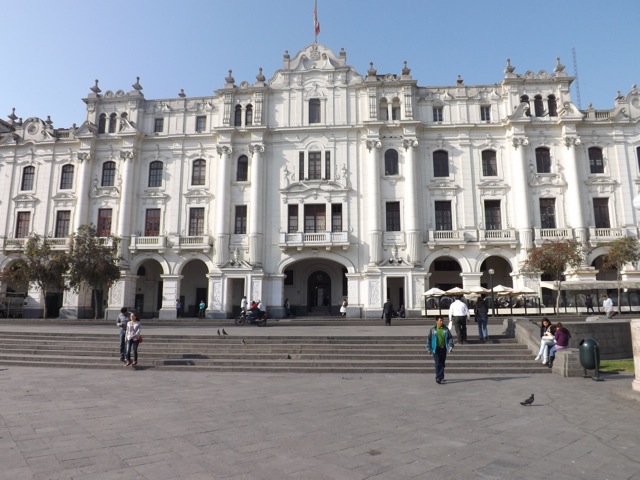 I continued north and back into the Andes to the city of Huaraz nestled between the Cordilleras Blanca and Negra. From Huaraz a group of us hiked the four-day Santa Cruz trek, with one of the hardest climbs I’ve ever completed. 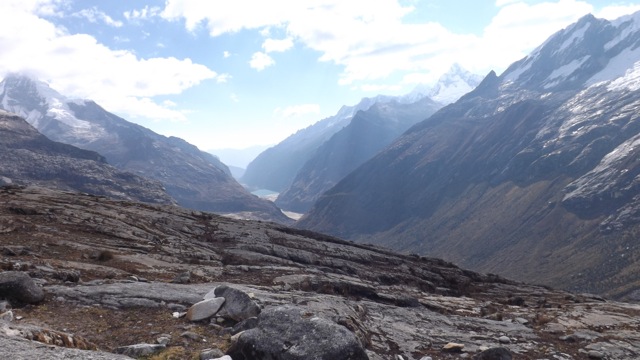 From Huaraz, I made my way to the far northern coast and the country’s second most visited destination, Mancora. Mancora is a beach town where I stayed for four days in a cabaña 20 metres from the Pacific Ocean. After the Santa Cruz hike, it was great to just sit and enjoy the beach for a few days. 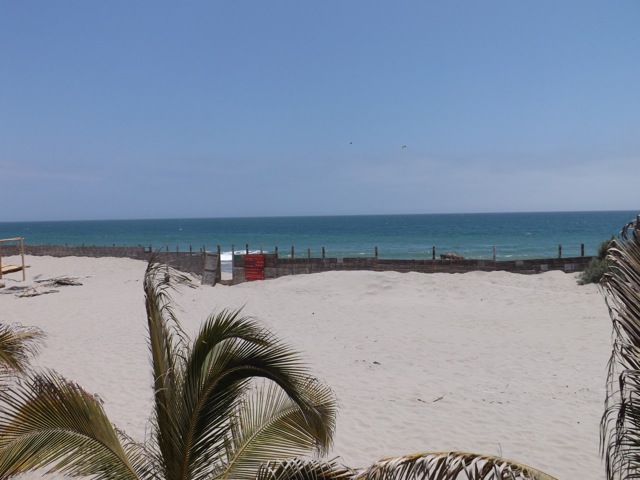 I left Peru and headed across the border to Ecuador’s capital, Quito, where I made plans to visit the Galapagos Islands. Two days later I was on a plane – my first since arriving in South America – and a few hours later landed on the famous archipelago. After booking a four-day cruise around the islands, I made friends with a Uruguayan guy at the hostel and spent the days prior to the cruise exploring Santa Cruz island with him, including a great swimming hole and the Giant Tortoise sanctuary. 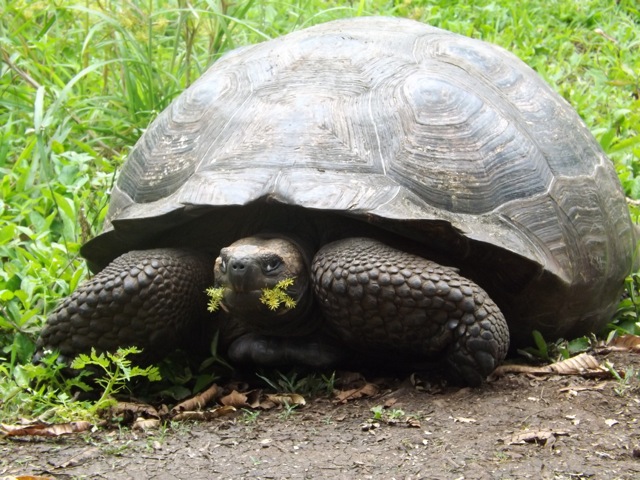 The cruise was amazing, I enjoyed snorkelling through the icy waters and swimming with penguins, fur seals, sea lions and sea turtles. On land there were many bird species including Blue Footed Boobies, the smaller water iguanas and the large land Iguanas. 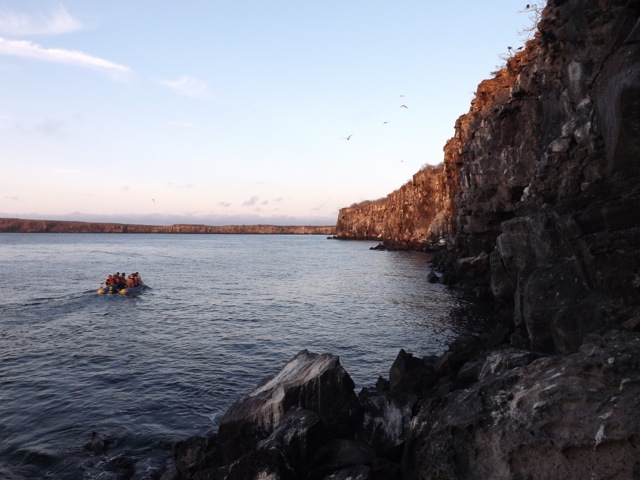 Back in Quito, I met some friends at the hostel and explored the city with them, including some amazing architecture, the original site of the equator and the newer more technologically accurate equatorial site. I had also prearranged with some locals to hang out with and spent a week enjoyed their company. 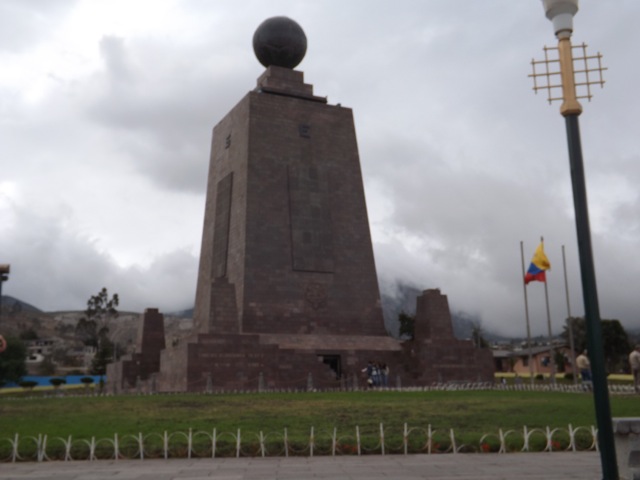 With my friends from the hostel, I headed north for a weekend to the adventure town Minca buried in the rainforest, where we hung out with Hummingbirds, zip lined ourselves crazy and generally enjoyed our stay. 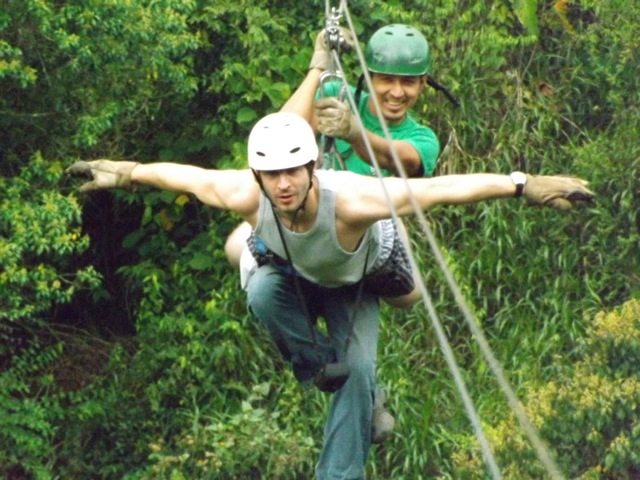 Next, two of us travelled south to the city of Riobamba where we hiked to the amazing crater lake of a collapsed volcano called El Altar. Most hiking in Ecuador must be done with a guide, but the two of us enjoyed the three-day hike without one. 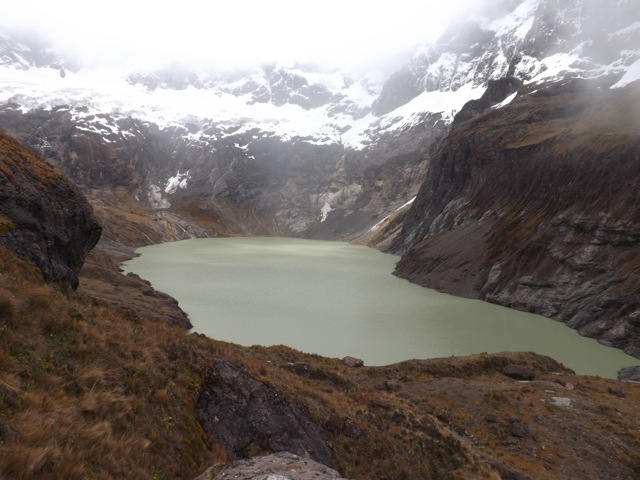 Then we headed south to the southern city of Cuenca where my friend headed into Peru and I explored Ingapirca, the ruins of an Incan Fortress. 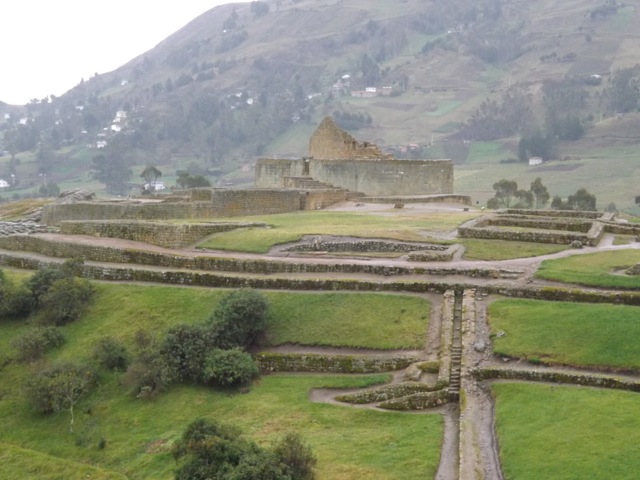 Then it was back to Quito for a last few days before I headed north into Colombia, to the city of Cali where I stayed for three days. I explored the city via a walking tour, learning its history, and climbed one of the hills to the local statue of Christ. 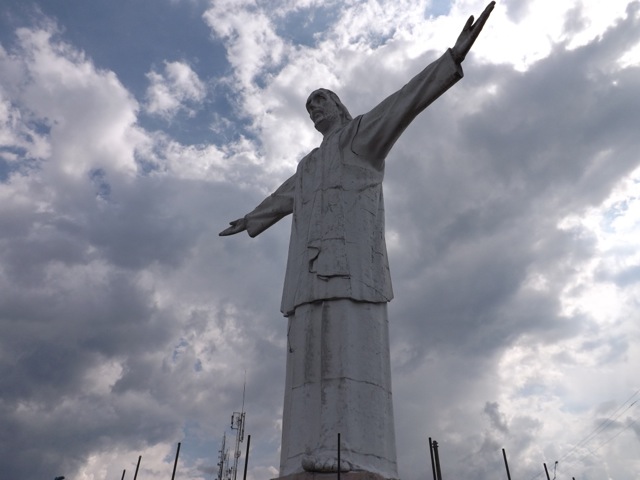 From Cali I headed north via a very winding mountain road where the bus driver thought he was formula one driver. After the humidity in Cali, Bogota was cold. I’d prearranged to meet some people in Colombia’s capital and they were so friendly I stayed for three weeks to spend more time with them, including attending a huge Pop Culture Festival…S.O.F.A. 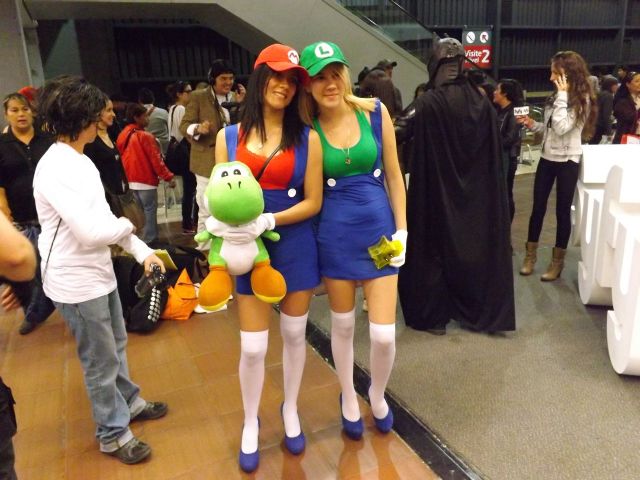 Bogota is not well set up as a tourist destination but during my stay I caught a cable car up to a temple of the hill giving awesome views across the city.

Then with general sadness at having to leave my friends in Bogota, I headed north to Medellin, a more popular city for tourists and home town of the late Pablo Escobar. I hung out at a New Zealand owned hostel and between a couple of nights partying I took a walking tour, both with a group and a separate one with a couple of guys from the hostel. 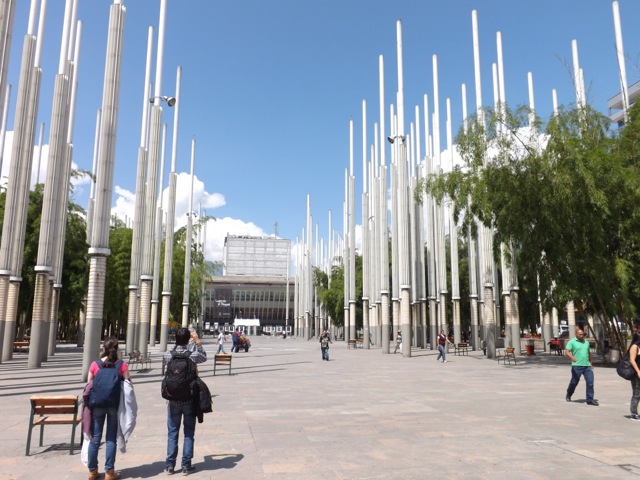 Next I headed to Cartagena, a city on the Caribbean Sea where I hung out for a few days in the extreme humidity. Cartagena’s Old Town has a great stone wall around it that once protected it from pirate attacks 500 years ago. The entire old town is a world heritage site. 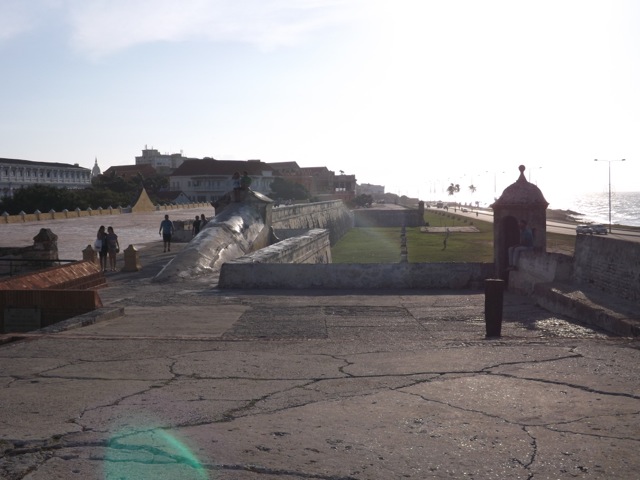 Further along the coast is a small beach town of Taganga where I stayed for a few of days. It was a quiet little town away from the bustle of the larger Colombian cities. 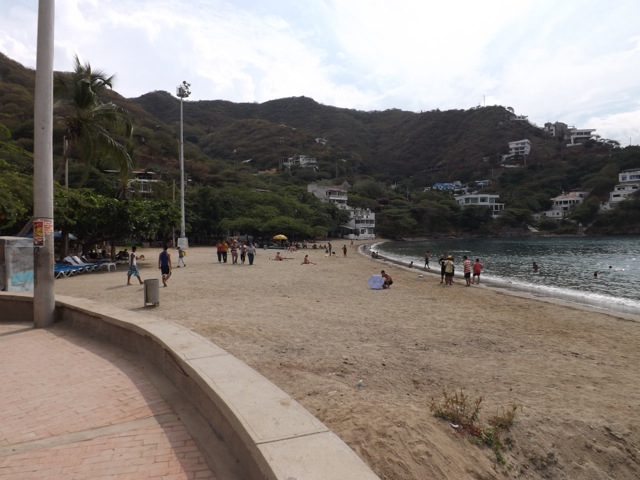 From Taganga I booked and walked the four-day jungle trek to find the Lost City, an amazing ruins of the local tribes that had been abandoned 500 years earlier. The trek was humid and sweaty, and this made the long climbs up clay trails more difficult. Swimming in the icy rivers were highlights of the sweaty days. 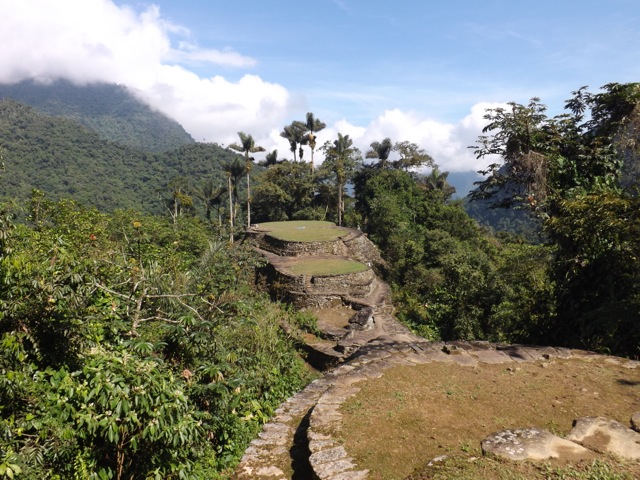 After a couple of recovery days in Taganga, I headed back to Cartagena to say farewell to South America. After 9 and a half months of amazing adventure, it was sad to say farewell to the continent, although my travels were not yet at a conclusion. In Cartagena, I booked a cruise on a yacht with 11 others to make my way through the Caribbean Sea to Panama, and the beginning of my Central American adventures.

This will be an adventure I will never forget.